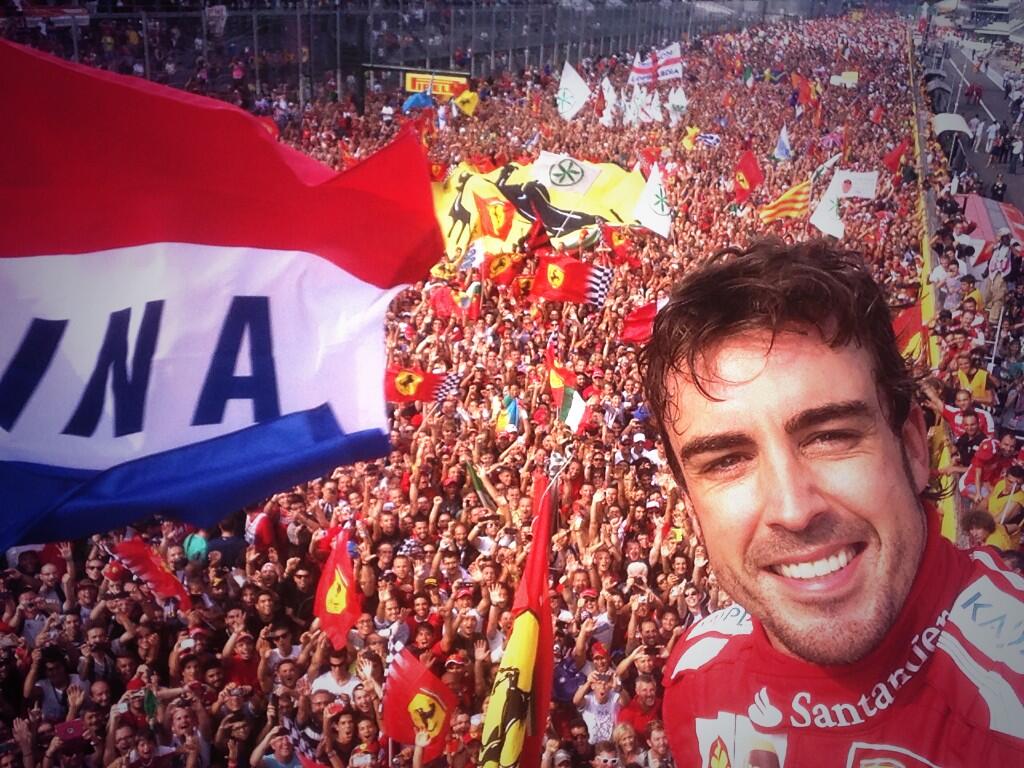 McLaren marked their 50th anniversary at Monza but it was Red Bull who ran away with another victory.

Get a glimpse behind the scenes at the Italian Grand Prix. @AnthonyFrench rounds up what the teams and drivers shared on Twitter during the race weekend.

Preparation for the last European race of 2013 began while McLaren readied more celebrations for their 50th anniversary.

Good morning from #Monza. We've gift-wrapped the Brand Centre for this weekend in celebration of #McLaren50… pic.twitter.com/yaD8EzdPSE

100 caps signed & ready for our guests this weekend! Now ready for the track walk! pic.twitter.com/W0r39mVel6

This is how Pastor keeps cool on track walk….. #Williamstrackwalk pic.twitter.com/b8pxTHBMwC

Continuing our delve into the archives, here are some paddock shots from '55. Garages and cobbles still intact! pic.twitter.com/Np4lktaynZ

Monza. Great track. Looking forward to be on it tomorrow! pic.twitter.com/mXOFASTJst

Lewis Hamilton posted the fastest time in first practice but from there on in it was Red Bull all the way with Sebastian Vettel well clear of his pursuers in the afternoon.

Always a lot of people to welcome you at #Monza ! That's nice ;) pic.twitter.com/nJHMytcY8j

Parking the car always 'creative' here in Monza! After one threat to tow and a man sprinting after us, we are safely in the motorhome :)

My car will go without me this morning…:( haha pic.twitter.com/UJPxmgK9MS

Michael Schumacher was fastest in this session last year. It was the last time the seven-times champion headed an #F1 times sheet.

#MonzaTech Lotus have swept the wishbones forward and lengthened the nose to make the LWB E21 pic.twitter.com/y5zQloCWLN

I've lived thru the consequences of the "leadership" change at the Medical Commission; the members can attest, one word suffices: STAGNATION

"The hydraulic activation arm [on Button's DRS] jammed against its carbon fibre cover, preventing deactivation of the wing element." #F1

The lovely @michaelcaines has escaped the kitchen briefly to come and check out the #FP2 action on track! #Monza pic.twitter.com/bl2r1HTyzt

@f1fanatic_co_uk Driveability is why you need…

Sorry for th?â?® Twitter silence guys and gals. We just got Eddie Jordaned! Long runs continue out on track #MonzaFP2

The Ferrari garage was busy on Saturday as Ferrari president Luca di Montezemolo paid a visit along with former Renault team principal Flavio Briatore. However there was some embarrassment as Fernando Alonso criticised his team on the radio after their attempts to have Felipe Massa give him a slipstream went wrong.

Red Bull had little to worry about as they breezed to a comfortable front row lockout.

Good men in #F1 like @former_f1doc get cast aside, while a man responsible for a disgusting and dangerous act of cheating gets VIP passes.

Honoured to welcome John Surtees to our garage this morning pic.twitter.com/Vq6l5IFZZG

Smedley tells Massa to give Alonso a tow: "On the second lap tow Fernando on the back straight, then pull over at Roggia chicane." #F1

congrats to @NicoHulkenberg! great show. part 1 achieved, part 2 still to go. but for now it is time for a #CuervoMoment! Cheers #ItalyHulk!

Stand out performance of the year @NicoHulkenberg !

I apologise to the team and the fans today. I'll be pushing like hell to get a decent finish tomorrow! #LHF1 #Monza pic.twitter.com/YOvr45Az6X

Despite rain shortly before the start, conditions dried up in time for the race and saw Vettel cruise home to his sixth win of the season despite concerns over his gearbox.

Alonso split the RB9s and made his fourth consecutive visit to the Monza podium as a Ferrari driver. Mark Webber tasted champagne on his first appearance on the podium at Monza and his last visit as an F1 driver.

Enough of the mealy-mouthed excuses. If Alonso is going to say this stuff he should stand by it afterwards #f1

Spots of rain in the Monza paddock. 1hr15 to race start.

INCREDIBLE #teamwork from the whole garage to get @jensonbutton out after a fuel system problem… pic.twitter.com/vNNY2lNfqA

Paul sadly out of the race. Some contact at the second chicane for him. We are waiting for him to come back to the garage.

Slade: "Kimi please avoid throttle and brake overlap." Raikkonen: "Why is that?" "Fuel consumption on the high side." #F1

Alonso complain in Italain, that Vettel is doing all race with rain lights on, trying to find a way to penalise I think. #not #fair

L22 Button told to "go past once more" then told "correction, we;re going to box this lap". #F1

Like a stealth machine, @nico_rosberg is now running P2. And delivering his fastest laps of the race so far #TyreManagement

Yes, we're on the line again trying to reach @LewisHamilton. He responded with a race fastest lap of 1:27.192…

Horner tells Vettel that Newey will join him on the podium: "We were going to send the Hoff up but he's not part of the team." #F1

Some motor racing fans are a disgrace. Why boo the best driver in the world for winning in style. Sebastian is a talented, very nice person.

On Hamilton's radio: "Just for comedy value, Lewis this is a radio check on the in-lap." No reply… #F1

A hell of a job this weekend boys! @NicoHulkenberg @Real_Flo Thank you!