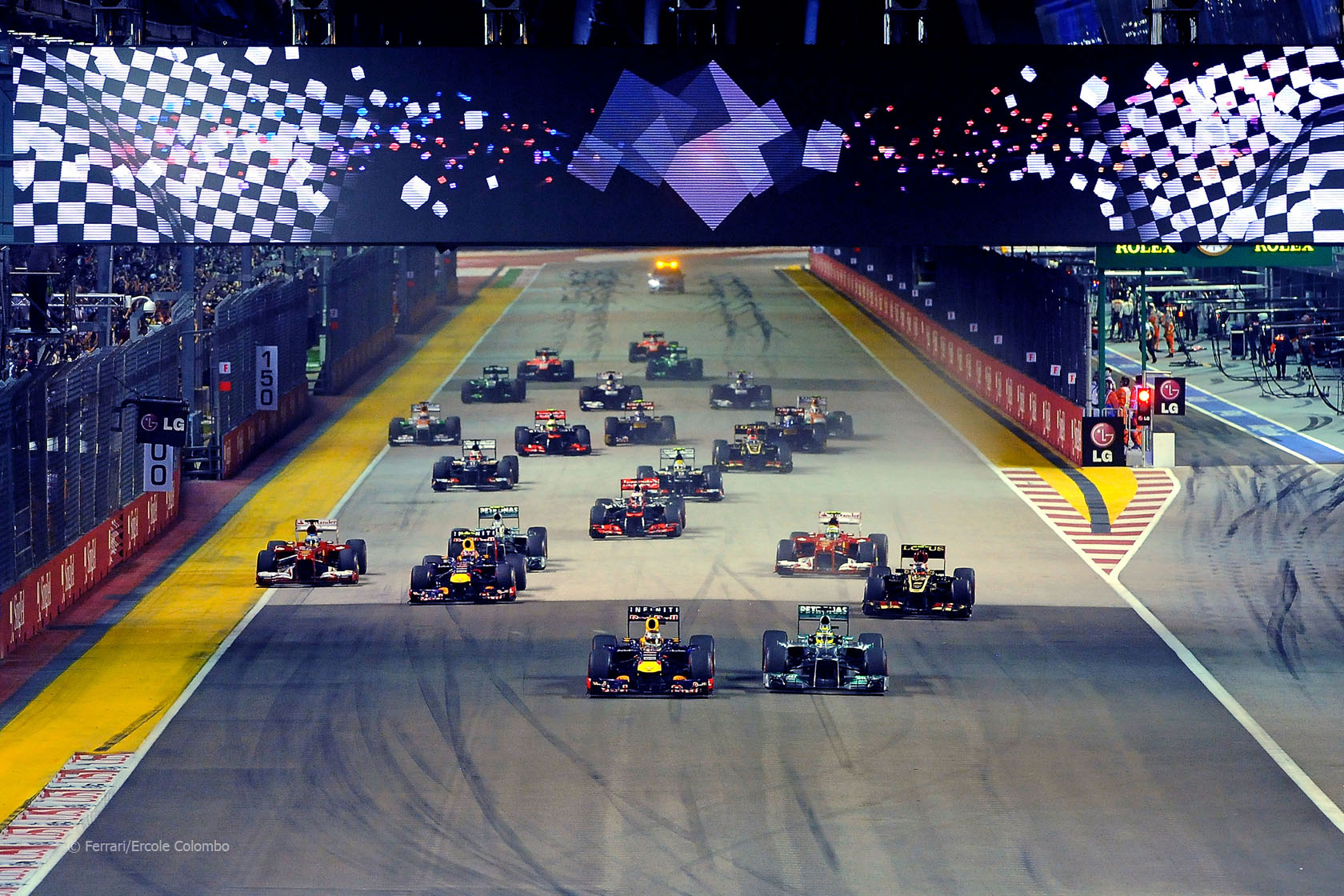 There was a brief moment when Sebastian Vettel’s progress towards his third win in a row might be in jeopardy – and it came just after the starting lights went out.

“I thought I reacted pretty well,” he said afterwards, “but was a bit lazy to get off the line”.

Meanwhile Nico Rosberg, starting alongside him, got his Mercedes moving quickly away from the dirty side of the track.

“I thought that Nico might still be there,” Vettel continued. “He was and we were side-by-side, kind of, so I had to give him room.”

“But fortunately he was braking quite deep into turn one and I was able to come back on the inside to get the position.” And that was that. Vettel neatly reversed the move and streaked off into a lead he never lost.

Alonso gets off to a flier

While Vettel stumbled at the start, Fernando Alonso made his usual flier. He’d been watching replays of previous starts at Singapore to perfect his getaway.

Alonso gift for finding the route of least resistance through the turn one traffic gave him a solid grip on third place. That position had been occupied by Romain Grosjean, but his attempt to fend off Mark Webber was unsuccessful, the Lotus driver falling to fifth.

Behind him Lewis Hamilton and Felipe Massa disputed sixth. The Mercedes driver claimed the initiative but he had gone off the track completely in doing so and as lap two began he heeded his team’s warning to surrender the position.

Despite the pain from his back Kimi Raikkonen was making progress from his 13th place. He dispensed with Paul di Resta and Esteban Gutierrez before making an early first pit stop on lap ten, the Lotus strategists eager to keep him in clear air. In short order the front runners began to respond – Ferrari brought Massa in two laps later to keep him ahead of the Lotus. Webber was in on the next lap, followed by Alonso the next time by. To his disappointment he came out behind the Force India of Di Resta, who was running a longer first stint.

“We had to cover Webber?óÔéĽÔäós early stop,” explained Pat Fry, “we knew we would have found ourselves in traffic behind Di Resta, but the pit stop window was very limited and we preferred not to take the risk.”

Five laps behind Di Resta doubled Alonso’s deficit to Rosberg from three seconds to six. On a normal day that might have been the end of his chances of taking second. But Singapore’s traditional Safety Car appearance would change that.

Vettel made his first pit stop after most of his closest rivals and emerged still in the lead, over ten seconds clear of Rosberg. But that precious margin was about to be wiped out by his future team mate.

Daniel Ricciardo had a frustrating start to the race from ninth on the grid. “My car just seemed to sit there without moving off the line,” he said.

“It was very frustrating to lose so many places right away. I think I went down five places from ninth on the grid to fourteenth. So I was on the back foot from then on, just trying to do the best I could.”

His frustrating race came to an early end on lap 24, the Toro Rosso skidding wide at turn 18, where the track vanished beneath a waterfront grandstand. “The crash was my error, trying to make up for lost ground,” he admitted afterwards.

“In the second stint, my engineer came on the radio and said ?óÔéĽ?Łthe pace is good, keep pushing.?óÔéĽÔäó I was aware that for the pace we had, we were not doing too badly and maybe at the end I was just trying to get too much out of it and made that mistake.

“It?óÔéĽÔäós a delicate corner with not much run-off and I went too deep into the apex. I then braked a bit harder, locked a wheel and went into the wall. It?óÔéĽÔäós not a mistake I?óÔéĽÔäóm used to making.” The Safety Car was summoned and the teams scrambled to respond. Vettel’s medium compound tyres were only seven laps old, so Red Bull left him out. Mercedes did likewise with Rosberg, who was on the same rubber.

Both of Ferrari’s drivers were also on the medium tyres, but they hedged their bets. “When the Safety Car came out, we had half a lap to take a decision and, in the end we brought both drivers in, trying different strategies,” said Fry.

Massa was also brought in, but he was put on the super-soft tyres. Unluckily for him he emerged behind Di Resta, who had put a fresh set of the same compound on just five laps earlier.

The Safety Car period dragged on far longer than it needed to while race control went through the rigmarole of letting the lapped drivers unlap themselves. In the meantime Vettel’s race engineer Guillaume Rocquelin reminded him to stay close to the racing line, avoiding the treacherous build-up of marbles.

But when the race restarted on lap 31 the tyre pick-up played into Vettel’s hands. Some of it became lodged in Rosberg’s front wing, causing severe understeer.

With Rosberg holding the rest of the field at bay, Vettel scorched ahead at a breathtaking rate. He had restored his former lead within four laps, and had more than doubled it after another five. A dozen laps after the Safety Car withdrew Vettel had the half-minute advantage he needed to make his final pit stop without losing the lead.

Like Vettel, Webber and the Mercedes drivers also had to make a second pit stop after the Safety Car came in. That played into the hands of Alonso and Raikkonen who made their final pits stops while the field was neutralised.

“I’m not sure we could have done what Fernando and Kimi did by staying out on that set of tyres for so long,” said Hamilton afterwards. But at the time Mercedes suspected Alonso wouldn’t got the distance and would be forced to make another stop.

By lap 45 Webber, Rosberg and Hamilton had made their final stops and were having to pick their way past drivers who were trying to make it to the end on a single stop. Gutierrez was passed by all three in a single lap, but Webber got himself some breathing space by temporarily getting Nico Hulkenberg between him and the Mercedes.

The McLaren drivers were next to fall. Jenson Button had been holding on to a podium position until it was taken off him by Raikkonen in a superb move on the outside of turn 14.

“We’ve got to take those sorts of risks if we’re going to get a podium this year,” Button reflected after the race. “We expected to spend most of the race on the [super-soft] tyre, so we?óÔéĽÔäód set the car up for that. The [medium] tyre didn?óÔéĽÔäót work so well for me, and having to hold Kimi off for so long destroyed my rear tyres and made things very tricky.” Shortly after Webber passed Button the Red Bull driver began receiving ominous but familiar messages about his gearbox on the radio. Simon Rennie urged him to short-shift, telling him “this is about getting the car to the finish now, we need low revs”.

The other Red Bull of Vettel had a brake vibration but as he faced no threat from behind it was easily managed: “I could definitely feel it,” he said. “It was building up towards the end of the race. Fortunately we were in the lead and we had a new set of super-softs which we saved yesterday, so I could afford to take it a bit easy.”

Ferrari had been anxious that Alonso might suffer a repeat of Canada 2012-style degradation at the end of the race. But although his pace was slower than the Mercedes he had plenty of time in hand. What he did not need was a Safety Car interruption – and he was fortunate to escape one.

Di Resta was still keeping Massa behind him when he went off into a barrier at turn seven. “I took the corner the same way as I had done the previous lap,” said a bemused Di Resta afterwards, “and the car went straight on and wouldn’t stop.” The Singapore marshals sprang into action and the Force India was recovered with no further interruption to the action.

On the penultimate lap Webber backed off so much that both Mercedes drove past him. But it was to no avail. “We could see with 12 laps to go that we began to lose water pressure,” team principal Christian Horner explained. “The water then effectively ran out at which point it is only a matter of time until the engine overheats.”

Cruelly for Webber, the car expired on the last lap. While one Red Bull coasted to a halt with flames coming from the back, the other was being saluted by fireworks as it triumphantly crossed the finishing line.

Adding insult to injury, after his retirement Webber collected a reprimand for walking onto the track to get a lift back to the pits from Alonso without getting the marshal’s permission – a reprimand which has earned him a penalty for the next race.

Di Resta’s late retirement promoted Hulkenberg to ninth place and Sutil to the final point. Pastor Maldonado had a strong end to the race, passing Gutierrez but missing out on the points.

Webber’s charred Red Bull was classified 15th behind Bottas and Vergne. Charles Pic tried to make it to the end of the race after pitting during the Safety Car period but had to pit with six laps to go and ended up the last running car.

Giedo van der Garde therefore took 16th for Caterham. Max Chilton was next, finishing ahead of his team mate despite being told to let him past at one stage, Jules Bianchi having had to pit for a replacement steering wheel to fix a gear change problem early in the race. For the third race in a row Vettel won and Alonso was second, both having done peerless jobs with their machinery.

The same was true of Raikkonen, whose dogged recovery drive to third was all the more impressive given his back trouble. For Lotus it soothed the blow of losing Grosjean to an engine problem in the second half of the race.

Vettel’s third consecutive Singapore Grand Prix victory makes his progress to a fourth drivers’ championship in a row ever more likely. His rivals will surely now believe their best chances of beating him any time soon will be to throw all their efforts into next year’s car.