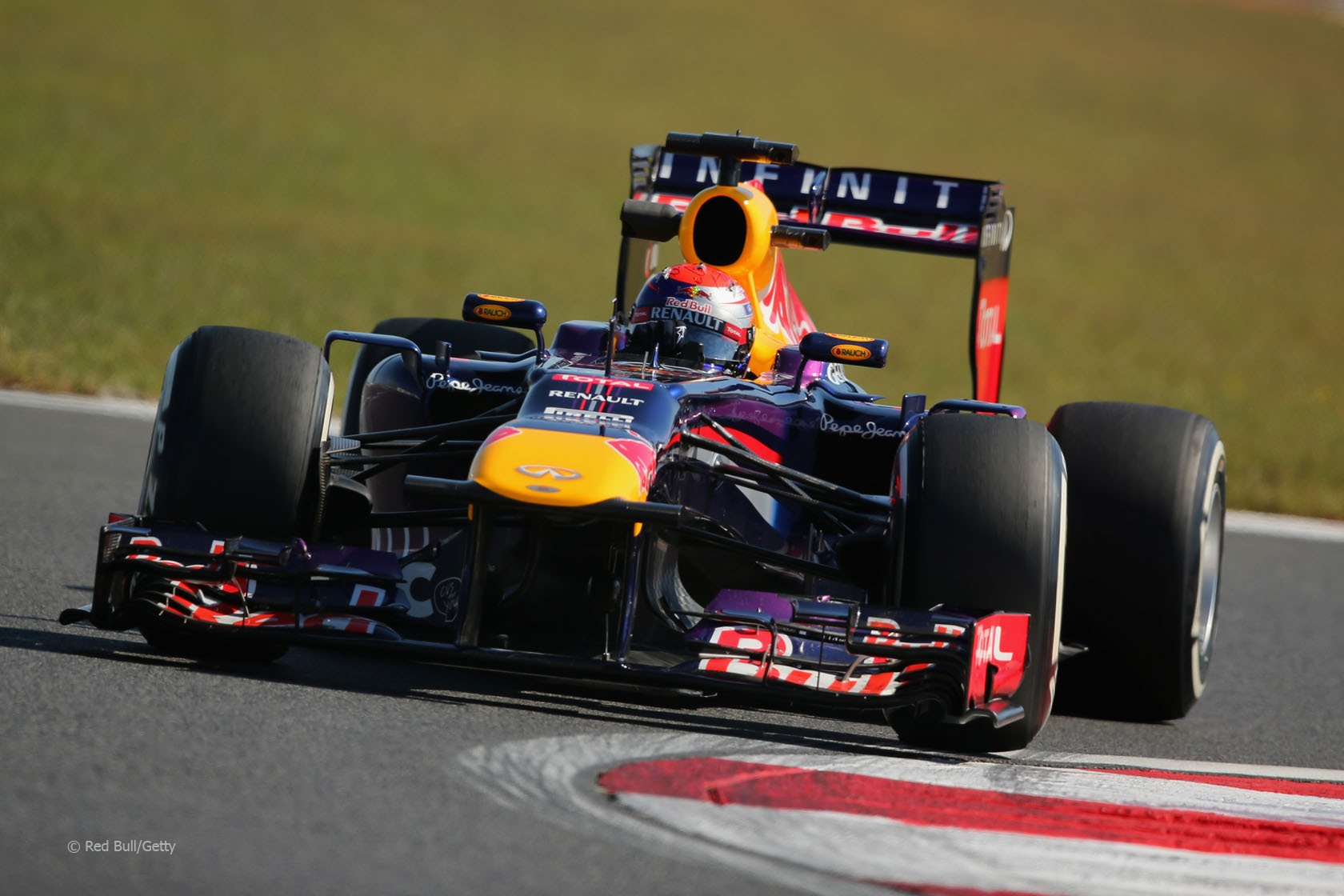 Sebastian Vettel shrugged off the challenge from Mercedes to claim his sixth pole position of 2013.

He will share the front row of the grid with Lewis Hamilton, who looked capable of threatening Vettel in Q1 but thereafter was consistently a few tenths of a second behind.

Q1 produced no major shocks as the Caterhams and Marussias were eliminated as usual and the Williams pair also failed to progress.

Paul di Resta made it through despite being held up by Jules Bianchi at the end of his final run.

Both Red Bull drivers were able to progress to Q2 without using a set of super-soft tyres, as was Hamilton. But Nico Rosberg picked up a puncture after his first run and had to return to the track for another attempt.

Hamilton led the way to begin with, beating Vettel’s best time from Q1 with a 1’37.824. But Vettel hit back, taking a further quarter of a second off Hamilton’s mark to stay ahead.

Their team mates were third and fourth and this quartet all chose to remain in the pits and save tyres for the final runs. So did Romain Grosjean, who did a late run in the Lotus to secure his place in Q3.

The rest of the drivers took to the track for a final run. Nico Hulkenberg put his Sauber in fourth and with team mate Esteban Gutierrez joining him in the final ten there was no room for either of the McLarens, who missed the cut by just four-hundredths of a second.

“I got screwed a bit by the Lotus,” complained Button after his final run. “That’s Raikkonen who you let by on your out-lap,” replied his engineer.

For the second race running Vettel’s first effort in Q3 proved good enough for pole position – but this time he wasn’t confident enough to stay in the pits.

His 1’37.202 ultimately proved quick enough for his second pole position in Korea. But race engineer Guillaume Rocquelin warned him that with the track conditions improving all the time his three-tenths margin over his closest rivals might not be enough.

So he returned to the track along with Webber, the two Mercedes and Grosjean – the Lotus driver having split the silver cars with his first run. But the final runs altered the order little: Vettel stayed ahead and Webber’s decision to abandon his lap promoted Hamilton, who would have moved ahead of him anyway due to Webber’s penalty.

The Ferrari drivers lined up behind them followed by the two Saubers and Raikkonen in a disappointing tenth.