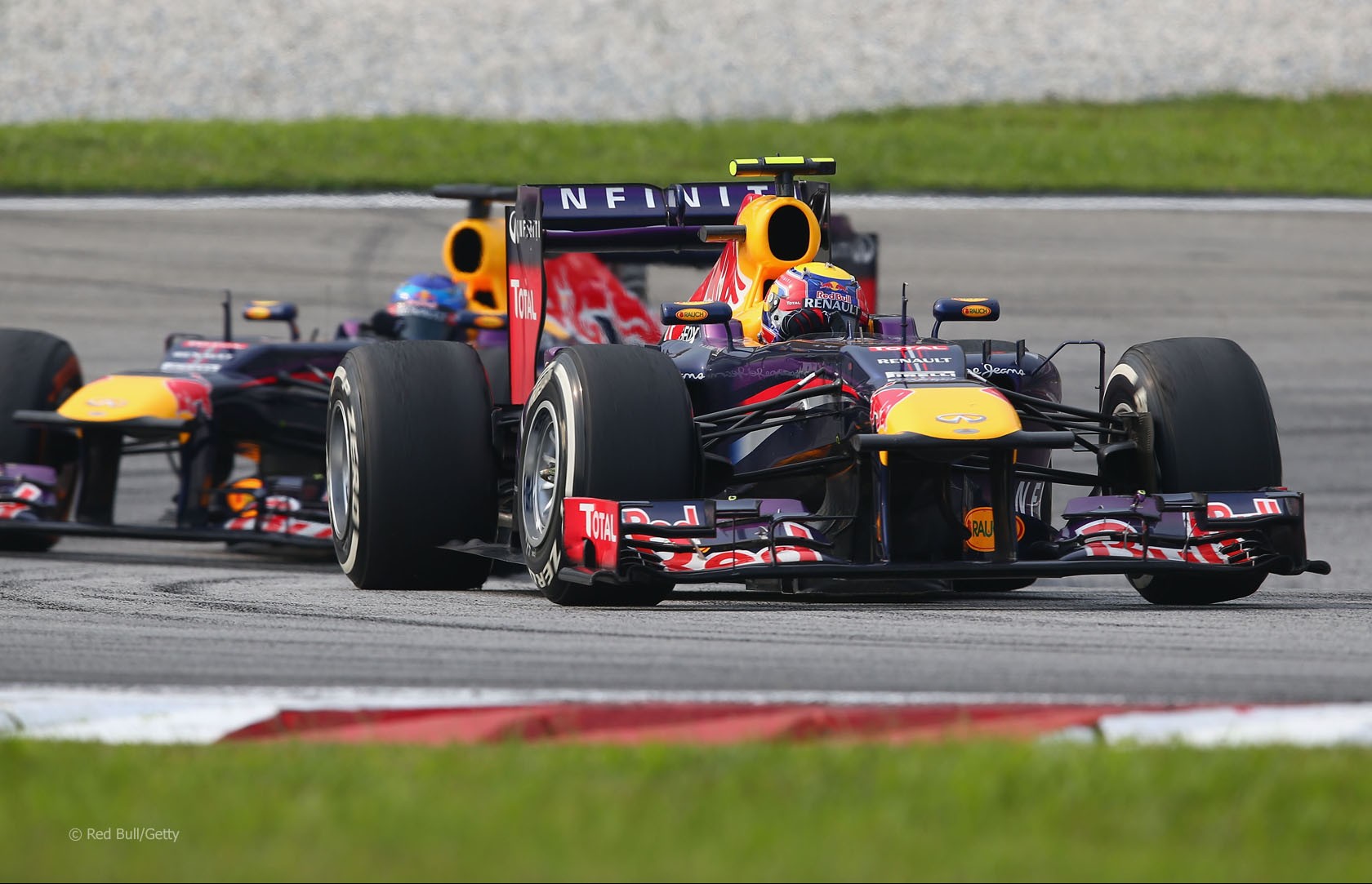 With the two Red Bull drivers sharing the front row of the grid, and Mark Webber ahead for the first time this year, this could be the first serious contest between the two since their notorious confrontation in Malaysia.

If Webber can hold on to his lead at the start we could be set for a race-long scrap between him and Sebastian Vettel.

Whether Webber can thwart Vettel’s hopes of another win in Suzuka could be decided by the sprint to the first corner. Starts are not a strength of Webber’s (on average he’s lost a position on the first lap of every race this year) and as Suzuka has one of the longest runs to turn one – 545 metres – this will have to be one of his best.

“We?óÔéĽÔäóre doing the prep we can,” said Webber of his starts, “the clutch is in good shape and we should be able to get away well and head down after that for a good race.”

Vettel’s first concern for tomorrow will be whether his mechanics can fix the KERS problem that dogged him on Saturday. After that he has to work out how he can become the first man since Mika Hakkinen in 2000 to beat the pole sitter to turn one at Suzuka.

The run to the first corner has produced carnage in two of the last three starts. Last year Fernando Alonso tripped over Kimi Raikkonen, Romain Grosjean took out Mark Webber and Bruno Senna collided with Nico Rosberg. In 2010, Vitaly Petrov didn’t even make it as far as turn one after hitting Nico Hulkenberg, while Felipe Massa cut across the first corner and smashed into Vitantonio Liuzzi.

That’s the kind of mayhem the drivers immediately behind the Red Bulls will be wary of avoiding. As last year Alonso starts on the right-hand side of the grid one place ahead of Raikkonen, albeit a row further back, and will not doubt be a little more cautious about moving left at the start.

Both need good starts if they are to have any hopes of finishing on the podium or passing their team mates – both of which have out-qualified them.

Lotus trackside operations director Alan Permane has no doubts Raikkonen can get the job doe, having taken podium finishes from ninth and thirteenth in the last two races. “To have Kimi start P9 is no big drama, especially as we know how well he can work through the field in race conditions,” he said. With Vettel on the cusp of claiming the championship – he could win it on Sunday – and Webber out of the running, thoughts inevitably turn to whether Red Bull will impose team orders on their drivers.

But recent history has shown neither of their drivers has the inclination to obey them – Vettel didn’t in Malaysia this year and Webber didn’t at Silverstone two years ago. And with Webber just five races away from retirement the chances of him suddenly having a change of heart about playing second fiddle to his team mate seem even more remote.

Given that, and the fact Vettel’s lead in the championship is already so large he’s unlikely to need Webber’s help, perhaps Christian Horner would be better off reminding his drivers not to take each other off and leave it at that.

Webber certainly doesn’t sound like he’s think of giving up a shot at what could be his last F1 victory: “Tomorrow is a new day and let?óÔéĽÔäós see how it?óÔéĽÔäós looking at the end of the race. Normally you talk about these things and they never happen but in general, yeah, we?óÔéĽÔäóll be there for ourselves tomorrow.”

Following the Malaysia row Horner said a discussion with Red Bull owner Dietrich Mateschitz had led them to conclude that “Red Bull is not a fan of team orders” and “we will not impose team orders at the end of a race”. Words worth bearing in mind tomorrow.

But it’s not just Red Bull who may have some decisions to make on team orders. Last week Lotus firmly declined Romain Grosjean’s repeated requests to be let past Raikkonen.

And Ferrari may have to engineer a means of getting Alonso ahead of Massa to maximise the former’s slender chances in the drivers’ championship. Since announcing his departure from Ferrari there have been mixed messages from the team whether Massa will continue to do Alonso’s bidding. Two stops were the way to go last year and Pirelli expect the same again this time. All the drivers in the top ten will start on the medium compound tyres they qualified on.

Red Bull’s long run pace looked predictably good on Friday. But following their disrupted build-up to the race Lotus now believe they’ve got a handle on the tyres.

“We spent more time on race preparation during morning practice and managed to unlock some extra pace in the car ?óÔéĽÔÇŁ especially on the [hards] ?óÔéĽÔÇŁ so we?óÔéĽÔäóre now very happy on both compounds,” said Permane.

“Yes, we did struggle with the hard tyres yesterday, but we?óÔéĽÔäóve made a significant set-up change which has certainly been beneficial in this area. Both drivers are much happier with their cars.”

Although Ferrari’s pace didn’t look as encouraging, Alonso believes they are in good shape: “The long run tests went better in terms of degradation than in Korea and that gives us hope that we can make up ground in the race.”

With a fairly narrow gap in performance between the tyres, and more durable compounds than were used in Korea, tomorrow should see the drivers exploiting the limits of their cars much more than in Korea. So even if the battle for victory is decided at the first corner, 53 racing laps of the mighty Suzuka will still be something to savour.

Vettel could win the championship in Sunday’s race – here’s what result he needs to clinch the crowd:

Will Webber score his first win of the year at Suzuka? What can Alonso and Raikkonen recover from the lower reaches of the top ten?

Share your views on the Japanese Grand Prix in the comments.