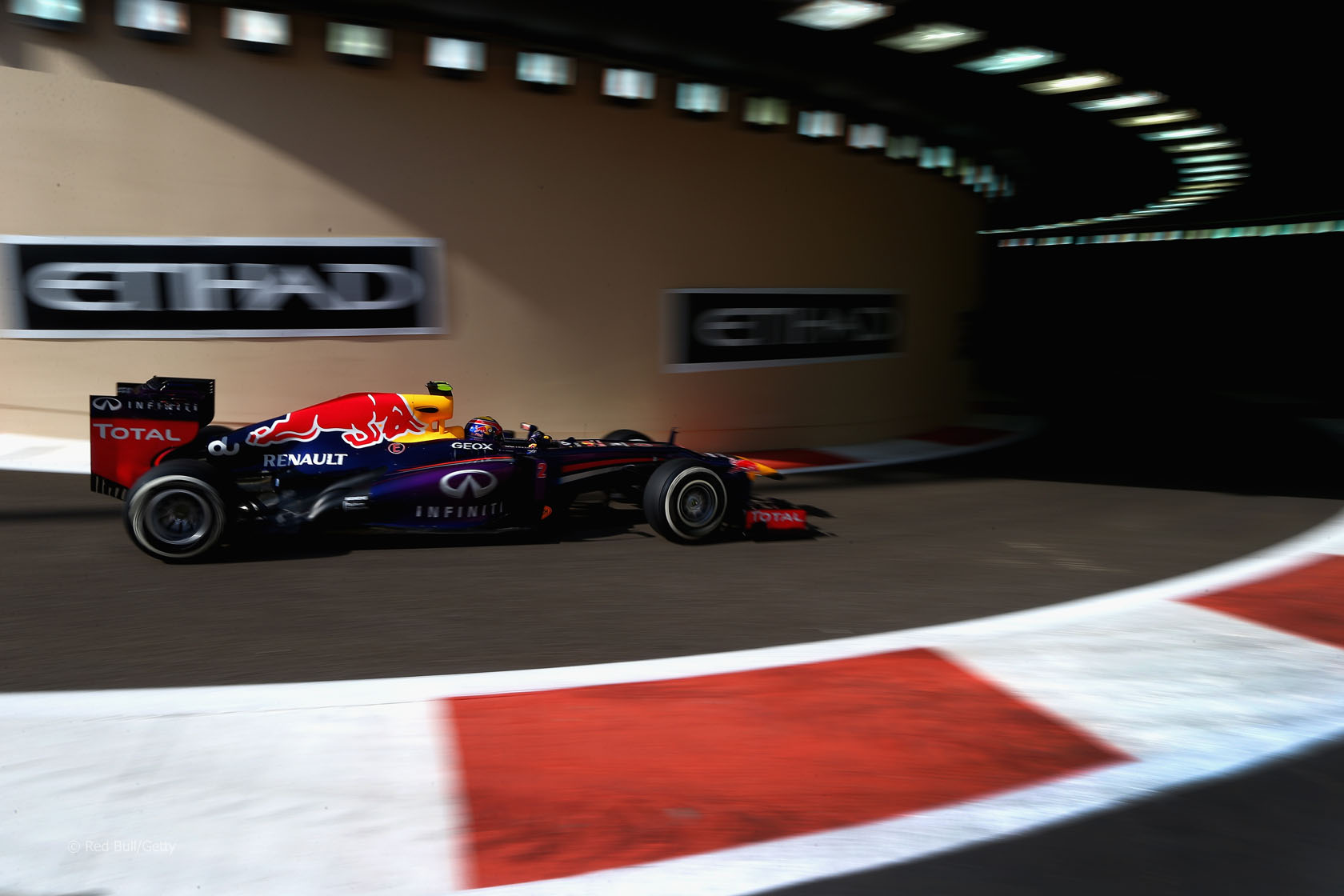 Mark Webber claimed his second pole position of the season in Abu Dhabi.

He shares the front row with Red Bull team mate Sebastian Vettel who looked on course for his eighth pole position of the year before being pipped by Webber.

The Mercedes drivers will share the second row after Lewis Hamilton spun on his final lap in Q3.

With the soft tyre offering a lap time boost of well over a second compared to the medium, some drivers didn’t even bother running on the harder tyres at the beginning of the session. That included the Red Bull drivers who did a single run on the softs to gain their place in Q2.

The Ferrari pair ran the mediums tyres at first then switched to the softs, Felipe Massa making a late leap from the bottom six to end the session second.

His gain was Esteban Gutierrez’s loss, the Sauber driver making his ninth exit in Q1 this year. He was joined by the Caterham and Marussia drivers as usual, plus a bemused Adrian Sutil whose race engineer told him they simply hadn’t been quick enough.

Max Chilton was the slowest qualifier, a fact partly attributed to his DRS not working, but team mate Jules Bianchi will start last due to a gearbox change penalty.

For the front-runners, Q2 was all about whether they could get through without making a second run. With the track temperature dropping – it was over 10C cooler than final practice – and lap times falling, they were aiming for a moving target in terms of the cut-off time.

Lotus estimated a 1’41.1 would be good enough to reach the final ten. Mercedes figured more like a 1’40.9 – and they turned out to be right.

Fortunately for Lotus, and unlike in India, neither of their drivers were caught out. Romain Grosjean made a second run and went through while Kimi Raikkonen went out as a precaution but didn’t set a time, as did Hamilton.

Webber was another of the driver who had to do another run and at this stage it seemed Vettel had the measure of him again.

The Ferrari drivers had been on a edge of the top ten all weekend. Massa’s final lap left him tenth with Fernando Alonso still on a lap. He was unable to break into the top ten, however, having to settle for 11th. Jenson Button was also knocked out, mystified about his car’s loss of pace since the last practice session.

The shoot-out for the top ten was between the Red Bull and Mercedes drivers. Wwhen Vettel when fastest in the first runs by three tenths of a second it again seemed like the usual story was playing itself out.

Hamilton lapped fractionally slower than he had in Q2 and on his way back to the pits asked his team to inspect his car. They did, despite not being able to see any problems in the data.

On his final lap a snap of oversteer at turn 13 put him on the kerbs, from where he could not recover. He spun off backwards at turn 14, ending his bid for pole.

Webber took to the track for his final run and began stringing together fastest sectors. He drove for the line and became the first person all weekend to tour the Yas Marina track in less than 100 seconds, setting a 1’39.957.

Vettel would have to find some more time but a mistake in the first sector had cost him over a tenth of a second. He ran wide at turn one, lost grip on the Astroturf, and from then on was fighting to regain lost ground. Despite taking a tenth back from Webber in the final sector, he fell short.

Raikkonen took fifth for Lotus, his best qualifying position since the summer break, with Nico Hulkenberg’s Sauber separating him from team mate Grosjean.

45 comments on “Webber takes pole from Vettel as Hamilton spins”