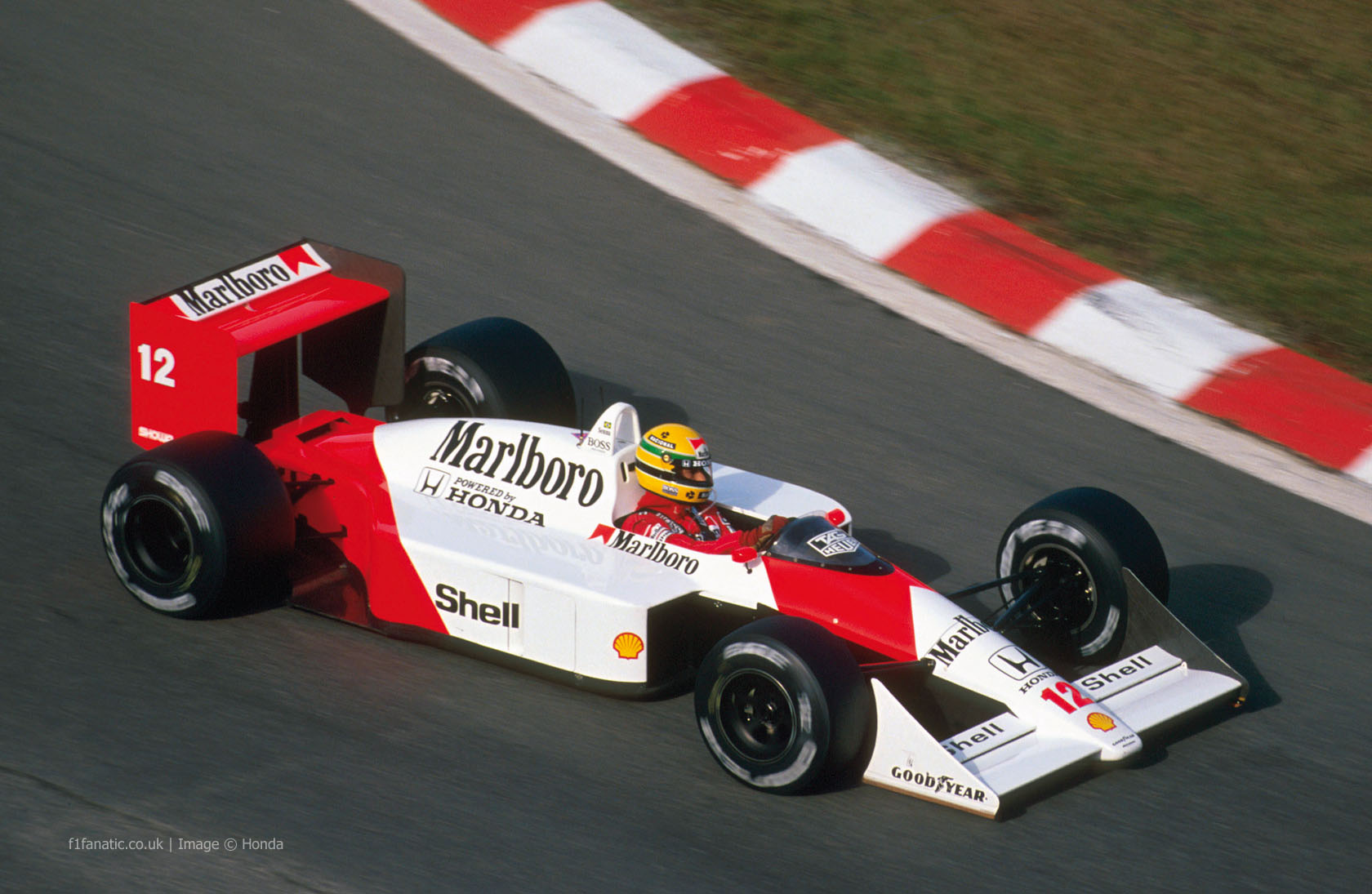 On Tuesday afternoon McLaren’s new Formula One car came to life as its Mercedes-Benz engine was fired up for the first time.

For the first time in 26 years their car – like every other machine on the grid this season – uses a V6 turbo engine.

The last time turbos were permitted in Formula One was in 1988, when McLaren won 15 out of 16 races. But for an altercation between Ayrton Senna and a backmarker with two laps to go at Monza, they would have swept the board.

That year marked the end of the last turbo era, one which McLaren had come to dominate. Renault may have led the way when they showed up with a turbo car in 1977, and Ferrari may have been first to win a championship with one five years later, but it was McLaren who stamped their authority on the turbo years.

Although F1 cars with normally aspirated engines continued to win F1 races as late as 1983, the opposition from their turbo-powered rivals from Renault, Ferrari and BMW (powering Brabham) had become irresistible. Realising this, McLaren’s Ron Dennis pulled off a coup by persuading Porsche, whose turbo-powered cars were dominating the sports car racing scene, to produce an F1 engine.

Designer John Barnard produced detailed specifications for the new unit and urged Porsche to adhere closely to them. But his careful planning was soon derailed: his concept was based around F1’s ‘ground effect’ cars of 1982, which were banned at the end of the year.

Nonetheless the project continued at considerable cost, which Dennis had persuaded Mansour Ojjeh’s Techniques d’Avant Garde (TAG) company to pay for. A comprehensive test regime was planned, beginning with Porsche running an early version of the engine in a 911 Turbo road car.

McLaren then produced a MP4-1D test hack for further development which lapped Silverstone quicker than the Cosworth-powered MP4-1C had. Barnard was reluctant to race the car until the new year but Niki Lauda believed they needed to get it in action as soon as possible to weed out any technical problems.

Lauda got his way by flying to meet with McLaren’s sponsor Marlboro, who leant on Ron Dennis to bring forward its race debut. This irritated Barnard even further, though he later came to appreciate the chance to solve the engine’s teething problems.

A single McLaren-TAG MP4-1E was readied for Lauda’s use at the Dutch Grand Prix. It was an inauspicious debut: the car lasted 25 laps before succumbing to brake failure, a common problem for teams adapting to their first taste of turbo power.

Team mate John Watson claimed a podium finish with his MP4-1C but for the balance of the season both drivers had turbo cars. Amid the drama of the three-way title decider at Kyalami the significance of Lauda holding second until an electrical fault stopped him six laps from home was lost on many. It was the shape of things to come. The 1988 season is justifiably remembered as McLaren’s greatest campaign. But their performance four years before that was almost as dominant.

There were similarities between the two seasons: both were McLaren’s first full year with a new engine supplier, their new car only tested briefly before the first round, but once they began McLaren routed the opposition.

It wasn’t the sheer power of the TAG-branded Porsche engine that helped McLaren win 12 out of the 16 races. The neat installation of the 80-degree V6, as specified by Barnard, allowed them to generate more rear downforce which in turn allowed the drivers to better control the power.

And Porsche’s sports car experience meant they were well equipped to cope with the flexible fuel management required by the ban on in-race refuelling and imposition of a 220-litre tank size.

If there was a weak link in the design it was the gearbox, which was little changed from the design used for the previous Cosworth engine even though it had up to 200bhp more power to cope with.

Nor did the engine respond well to the high boost pressures demanded for a flying lap in qualifying. Indeed, while McLaren-TAG cars won twenty-five races in four years they set just seven pole positions.

It didn’t stop them piling up silverware. Alain Prost returned to the team to partner Lauda and gave the MP4-2 a winning debut in Brazil. Lauda beat his team mate to the drivers’ title by the closest ever margin – half a point. But in the constructors’ championship it was a different story – McLaren had well over twice the haul of runner-up Ferrari.

Evolutionary development of the MP4-2 was sufficient for McLaren to retain the constructors’ championship in 1985 while Prost finally claimed his first drivers’ title. That had looked likely after he began the season by scoring McLaren’s eighth consecutive win – but it turned out to be a closer affair than many expected.

This was particularly true in the constructors’ championship where Ferrari remained in contention until the final round. Prost had wrapped up the drivers’ title two races earlier but Lauda endured a miserable title defence, bearing the brunt of the team’s technical problems and only scoring a single win.

At times the constraints of the fuel rules proved too much even for Porsche’s increasingly advanced solutions. Prost’s victory at Imola was annulled when his car, which ran dry after he crossed the line, was found to be underweight. He came close to losing his Monaco win for the same reason.

Detail changes to the car’s aerodynamics and new turbochargers introduced at mid-season were enough for McLaren to sustain their position as the team to beat in Formula One.

Year three for the MP4-2 generation and finally the opposition had caught up. Indeed Williams had set the new standard with their Honda-powered FW11s, and beat McLaren to the constructors’ championship.

But with fuel tank sizes cut by a further 25 litres, a disciplined right foot and a clever engine management system were the things to have. And that’s just what McLaren had courtesy of Prost and Bosch Motronic.

Bosch had learned about engine management systems the hard way. After one test with Brabham a few years earlier an absent-minded technician accidentally destroyed a control box, losing the details of a set-up Nelson Piquet believed he had honed to perfection.

Prost was probably also grateful that new team mate Keke Rosberg, who struggled with the understeer-prone chassis, took fewer points off him than the Williams duo did to each other.

That made the difference after a dramatic finale at Adelaide where Mansell’s tyre exploded and Piquet had little option other than to make a precautionary pit stop, handing Prost a surprise title win.

In their final year with Porsche power there was no championship success for McLaren or its drivers – the only time this happened in their five full seasons with a turbo-powered car.

Prost won the season opener at the Jacarepagua circuit in Rio de Janeiro but the Honda-powered cars soon took control of the championship. At circuits like Silverstone, Hockenheim and Monza where sheer grunt mattered most McLaren were completely outgunned.

The Porsche engine had produced some 600bhp at birth and successive upgrades had boosted that to around 850bhp. But efforts to extract greater grunt from the V6 were only partly successful, and came with the consequences of increased weight and some reliability problems.

Nonetheless Prost took three wins, surpassing Jackie Stewart’s record career tally with his 28th in Portugal, which was the last for McLaren-TAG.

Stefan Johansson made a decent contribution to the team’s points total, enough for them to claim the runner-up spot in the championship. But in circumstances Sergio Perez will sympathise with he was jettisoned at the end of the season to make way for a driver McLaren expected great things from. The arrival of Ayrton Senna was one of two major changes at McLaren in 1988. The other was the replacement of TAG-Porsche power with Honda – the engine which had been arguably the best in F1 for the last two-and-a-half years.

As 1988 was slated to be the last year for the turbo engines, and even tighter new restrictions had been imposed upon them, many expected the normally aspirated cars to be back in contention. The likes of Benetton, Williams and March would have been in the hunt for victories had McLaren’s Honda-powered MP4-4 not been on a different planet.

The scale of their advantage makes Red Bull’s margin in the season past look miniscule. When Senna scored his first victory for the team at Imola his pole position time was 3.3 seconds faster than the quickest non-McLaren. Victory margins in excess of half a minute were the norm.

Honda’s technicians had produced an engine which extracted more power than their rivals’ without exceeding the limits of 150 litres for fuel tanks and 2.5 bar for boost pressure. But there was more to it than that. Lotus, after all, had Honda engines too – and a three-times world champion – yet failed to win a single race.

You only had to glance at the MP4-4 next to one of its rivals to understand where some of its advantage came from. Low, flat and narrow, it owed much to a previous creation of the team’s new designer Gordon Murray. The radical low line format of Murray’s Brabham BT55 was now refined into something much more potent.

The result was 15 wins and 10 one-twos from 16 races and Senna’s first championship victory. And McLaren won the constructors’ championship with 199 points – just two fewer than all their rivals’ scores combined.

McLaren will launch the first of its next generation of turbo-powered cars tomorrow. The MP4-29 has a strong heritage to live up to – and next year’s Honda-powered MP4-30 will stand comparison with arguably the greatest F1 car of all time.