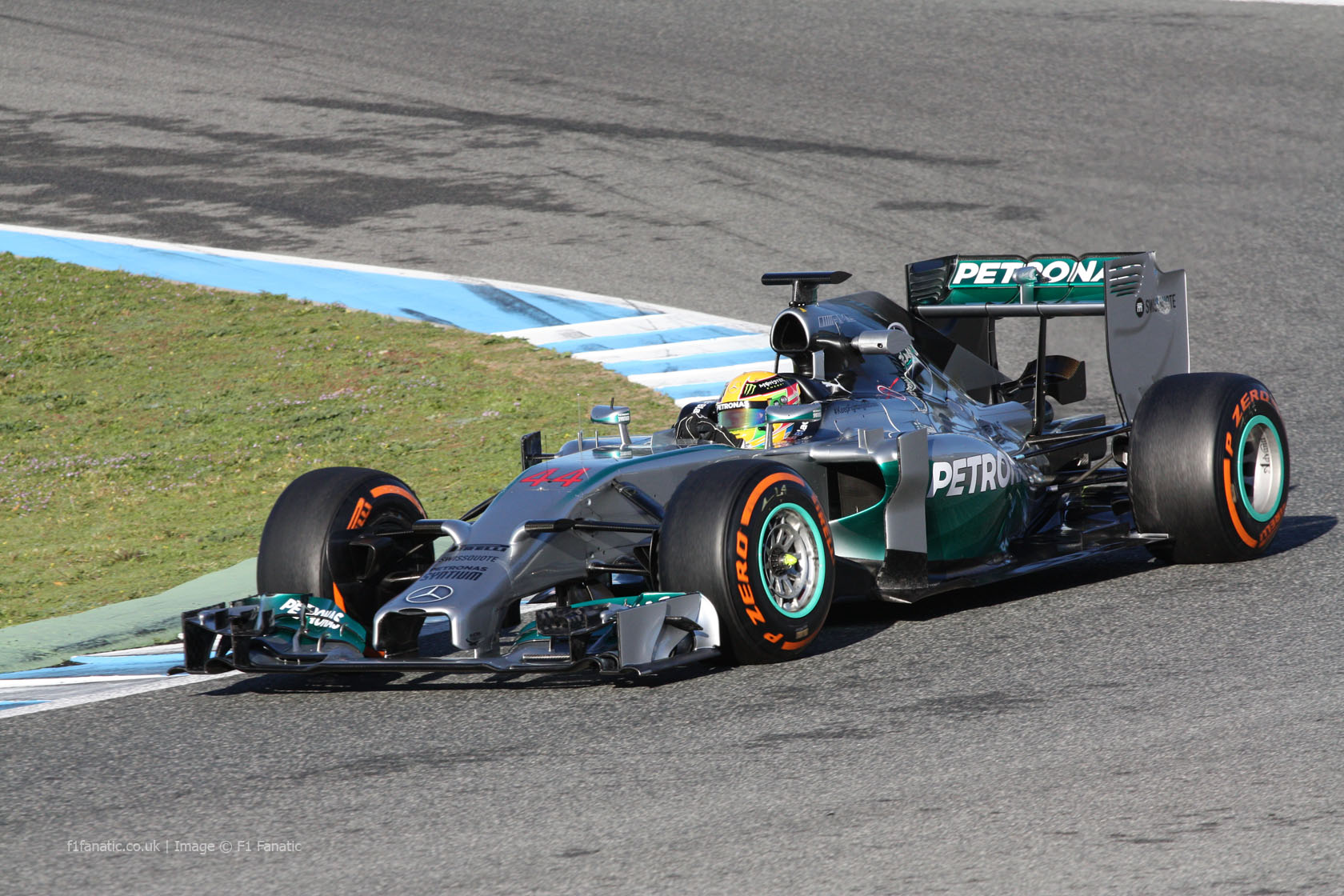 Turn two at the Circuito de Jerez in Spain is over 17,000 kilometres away from Melbourne, Australia, scene of the first race of the year.

But as far as the F1 teams are concerned it is seven weeks away. And that matters because some of them have a huge amount of work to complete before the season begins.

An hour spent watching the cars tackling turn two on the morning of the third day at Jerez threw into sharp focus how far on each of the teams are with their 2014 programmes.

On a warm track under a clear sky, Lewis Hamilton is already piling on the laps. But as he accelerates away from the scene of his Tuesday accident it’s clear he’s leaving some of the Mercedes’ potential untapped.

He rolls the W05 gently into the sharp turn two and picks up the throttle carefully at the exit, leaving no risk of breaking traction as the track twists downhill to the left.

Few of his rivals accompany him at first. Adrian Sutil passes by in the Sauber C33, whose low aircraft whine at all speeds immediately distinguishes it from any other car on the track. He pits after a gingerish lap.

Robin Frijns is next to emerge from the pits in his Caterham. The CT05 popped and banged on its first steady tour of the track an hour earlier, then came to a stop at the pit lane entrance. As Caterham occupy the pit box farthest from that point, Frijns’ poor mechanics had to jog the length of the pit lane and then push him all the way back.

The car completes a second run under its own steam, its Renault engine sounding better but still not right. Meanwhile Hamilton presses on, pushing more now, using the full width of the track at the exit, but still driving within himself. Steady testing pace. Out of sight, another engine fires up in the pit lane. A small group of spectators inside turn one clap and whistle: it’s Fernando Alonso, making his first appearance at Jerez in two years.

In marked contract to Hamilton, Alonso is really leaning on the F14 T. He runs deep at turn two on his first attempt, then fires the Ferrari down the hill. The flat-faced red car is not what you’d call attractive but it makes a welcome break from its dull-coloured rivals and their snigger-inducing noses.

More importantly as far as Alonso is concerned, it seems to be a willing partner to his driving ambitions. He comes back into view and aims the car at the apex of turn two, punches down the gears, and the F14 T obliges with the crisp turn-in he favours.

Sutil rejoins the track for another slow tour as Hamilton’s stint comes to an end. Mercedes were the first team to hit the track on Tuesday and their drivers have racked up more kilometres than anyone else so far. It’s not unusual for them to complete high testing mileages – only Sauber did more during pre-season last year – but in the context of the 2014 rules overhaul it is significant.

By the end of day three the Mercedes-powered cars had accumulated over 2,000 kilometres of running at Jerez. That’s twice as much as Ferrari and almost six times more than Renault. That advantage counts double as not only are they enjoying better reliability, but it allows them to make far more rapid progress in exploring the limits of complex new regulations which offer vast potential for gains.

The new brake-by-wire systems is just one the new areas which needs to be mastered. Back on the track Sutil is still plugging away on his first morning in the C33, his front-right wheel never rotating on his approach to turn two as his left foot adjusts to new sensations.

Jean-Eric Vergne judders past in the Toro Rosso, whose Renault engine is making a variety of unconvincing noises. He is 20 seconds off the pace as his team strive merely to get the car running properly.

Day one of the test was a write-off for McLaren, so some of the time Kevin Magnussen was due to spend in the car has been given to Jenson Button. Watching his progress in the MP4-29 you wouldn’t know he had a complicated new braking system, torquey turbo and vastly uprated energy recovery systems to contend with. His trademark smoothness is much in evidence. But ‘smooth’ is not a word you would use to describe the noise from his new engine – a subject which has been the cause for much debate. I may be in the minority but I wasn’t wedded to the sound of the old V8s, which to my ear were loud but bland.

The new V6 turbos are a bit quieter as you’d expect, but you’re not in any danger of forgetting you’re at a racetrack. More interestingly, there are discernible differences from engine to engine and car to car – something which had been lost under the old formula.

The Ferrari is the most pleasant of the three to listen to, while the Renault appears too infrequently to pass judgement on. The Mercedes sounds great at full song, but emits a gruff burble on part-throttle.

Put 22 of these on a track and I think it will sound great. Compared to the ridiculous-looking cars and the ludicrous double points rule, it doesn’t concern me in the slightest. But not everyone agrees – one photographer I spoke to later lamented how dismal he thought the new cars would sound at a larger venue like the Circuit of the Americas.

I head back to the paddock without having seen three cars. The Marussia appeared later that day and the Lotus hasn’t made it out of Enstone, though given Renault’s early problems they may not have missed much.

Renault’s plight is illustrated most dramatically by Red Bull, whose serious lack of running is a major talking point. They still have time to regroup but the world champions have begun the year on the back foot.

Meanwhile Hamilton has re-emerged in the Mercedes. Still seemingly not at ten-tenths, the W05 now appears at the top of the times charts as well as the lap count.

These are still early days, but Mercedes are looking as strong on the track as they are on the data screens.