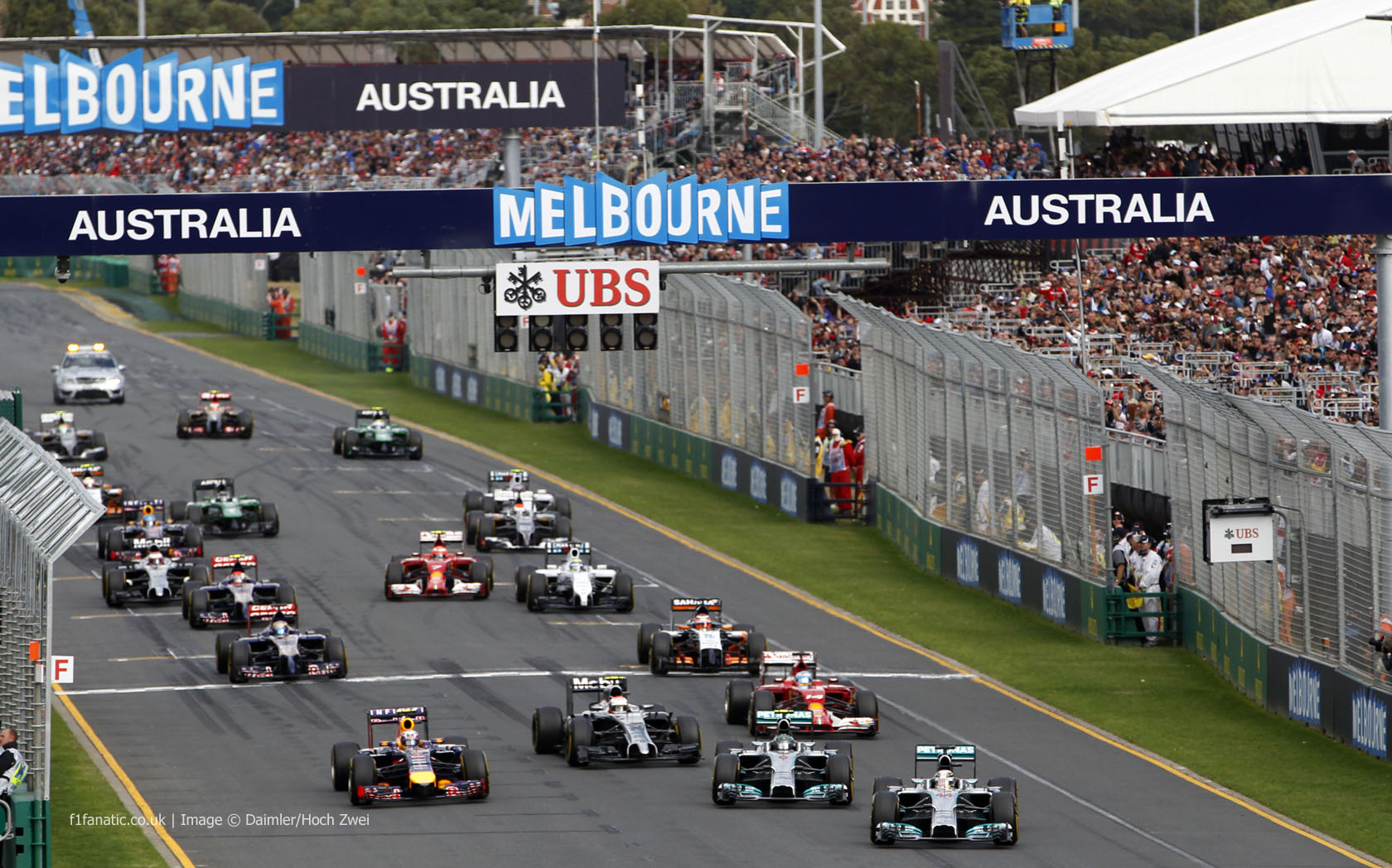 Who stood out from the pack during the Australian Grand Prix weekend?

Review the performances of all the drivers below and vote your Driver of the Weekend for the Australian Grand Prix.

Sebastian Vettel – A tenth consecutive grand prix victory never looked likely. Software problems caused a lack of engine power in qualifying, leaving him well over two seconds off the pace and unable to make the cut for Q3. His car still wasn’t running properly when the race started and he soon retired.

Daniel Ricciardo – Whether or not the fuel flow rate infringement which ultimately wrecked his weekend was significantly contributing to his car’s performance, Ricciardo coped with the pressures of performing for a top team for the first time on his ground admirably. His qualifying lap on a soaked track on intermediate tyres, which had shades of his predecessor at Malaysia in 2010, was a superb effort which demonstrated he deserves his place in a championship-winning outfit. Nico Rosberg – Was a close match for Hamilton on pace all weekend but slipped up in qualifying, going off at turn nine as he began his final run in Q3. That left him without enough time to do another flying lap which might have netted him pole position. However he dodged his way through the front row at the start and spent most of the race measuring out small quantities of the W05’s vast potential. He’ll be grateful the front wheel hub damaged incurred at his final pit stop didn’t end his race, however.

Lewis Hamilton – Bore the brunt of Mercedes’ reliability problems which struck during first practice and – more significantly – the race. He’d take pole position in the rain-hit qualifying session but after losing a cylinder at the start he was never going to be able to do anything with it.

Fernando Alonso – An initial gamble on intermediate tyres in Q3 didn’t seem to be paying off, so he switched back to wets and took fifth. He was also cleared of allegedly impeding Gutierrez during Q1. Spent the first half the race stuck behind Hulkenberg, and though he got ahead at the second pit stop he couldn’t keep the recovering Button behind. That meant he finished where he started, before being promoted by Ricciardo’s exclusion.

Kimi Raikkonen – Had more problems with his car than Alonso in practice. In qualifying he crashed at turn three, but said he had already missed the cut for Q3 anyway. Like Alonso he had electrical problems on his car during the race, though Pat Fry said Raikkonen’s were more severe. Nonetheless he brought the car home in the points.

Romain Grosjean – The Lotus E22 is in dire need of further testing and on the rare occasions it ventured from the pits Grosjean had major problems with the car. He had to start from the pit lane and a procedural error by the team earned him an immediate drive-through penalty. The Safety Car helped him regain the field and he passed Maldonado, but both were doomed to retire.

Pastor Maldonado – Car problems kept Maldonado from even setting a time during qualifying. He was given a dispensation to start based on his FP3 lap time – a deliverance, as he hadn’t set a time in either of the other sessions, illustrating the scale of the task Lotus are facing. Jenson Button – Missed the cut for Q3 as he had to back off following Raikkonen’s crash. Reacted quickly to the Safety Car deployment and his quick dash into the pits gained him three places. He then undercut Alonso and Hulkenberg at his second stop to pick up two more, and homed in on Ricciardo and Magnussen during the final stint.

Kevin Magnussen – It said a lot that Button singled out Magnussen’s qualifying lap in the rain as an even more impressive aspect of his race weekend than his classy drive to a podium finish on race day. He flirted with disaster at the start, almost spinning in front of the pack, but having kept it under control he sped off to a strong and thoroughly well-deserved result.

Nico Hulkenberg – Reached Q3, unlike his team mate, and ran inside the top ten for more than half the race. Front-left tyre graining was a problem and he ended up falling behind Alonso and Button ahead of the final stint.

Sergio Perez – Went off at turn three as the track conditions began to worsen in Q2, moments before Raikkonen crashed his Ferrari. Having pitted to replace a punctured tyre on lap one, due to contact with Gutierrez, he picked off the stragglers and was able to inherit the final point.

Adrian Sutil – The only driver to use a one-stop strategy during the race. It didn’t pay off, leaving him out of the points.

Esteban Gutierrez – Made a late start to Q1 due to ongoing problems with his car and blamed the resulting traffic problems on his failure to make the cut. Said his car had a “significant” lack of straight-line speed but at least managed to bring it home, outside of the points. Jean-Eric Vergne – Given his many off-track moments during practice while he grappled with his car’s brake-by-wire system, it was a surprise to see him reach Q3. Vergne’s wet weather pace served him well once again. He was passed by Raikkonen and Bottas twice during the race but getting ahead of them once was an achievement, and an eventual eighth place a fair reward.

Daniil Kvyat – Accompanied his team mate in Q3 despite his inexperience, the treacherous conditions and the challenging nature of the new cars. Gambling on intermediates for his last run didn’t pay off – he hit the wall – but nonetheless started a highly creditable eighth. He kept his nose clean in the race as well and became F1’s youngest ever points scorer. Felipe Massa – A disappointing start for his new team. Although the Williams was quick in the dry a lack of rear downforce made it a handful in wet conditions. He reached Q3 nonetheless, only to be wiped out at the first corner by Kobayashi.

Valtteri Bottas – A gearbox change penalty left him back in the pack. He wielded his much more competitive Williams to good effect in the opening laps but perhaps his exuberance got the better of him. Having picked off the Toro Rossos and Raikkonen he was lining up Alonso when he whacked the barrier at turn ten. He was fortunate to keep going and, thanks to the Safety Car, lose only a fraction of the time he might have. But it took until the end of the race for him to get back where he’d been.

Jules Bianchi – Electronic and gearbox problems hampered his qualifying. The gremlins remained on race day – he lost six laps at the start when his car died on the grid. Once he got going his race pace was considerably better than Chilton’s but the damage was already done.

Max Chilton – Said he only made one mistake on his clean lap in qualifying, and was two-hundredths of a second off reaching Q2. Like his team mate he had to start from the pits due to car problems, but was gaining on Ericsson’s Caterham even without the help of the Safety Car.

Kamui Kobayashi – Despite failing to complete a single timed lap on Friday due to various problems. Kobayashi got his Caterham into Q2 on his Formula One return. His raced ended early, but he was exonerated by the stewards after the first-lap crash with Massa, which was blamed on a brake-by-wire glitch on Kobayashi’s car.

Marcus Ericsson – Also did little running in practice – hardly an ideal situation for a driver making his F1 debut. His race was curtailed due to a loss of oil pressure.

Who was the best driver of the 2014 Australian Grand Prix weekend?