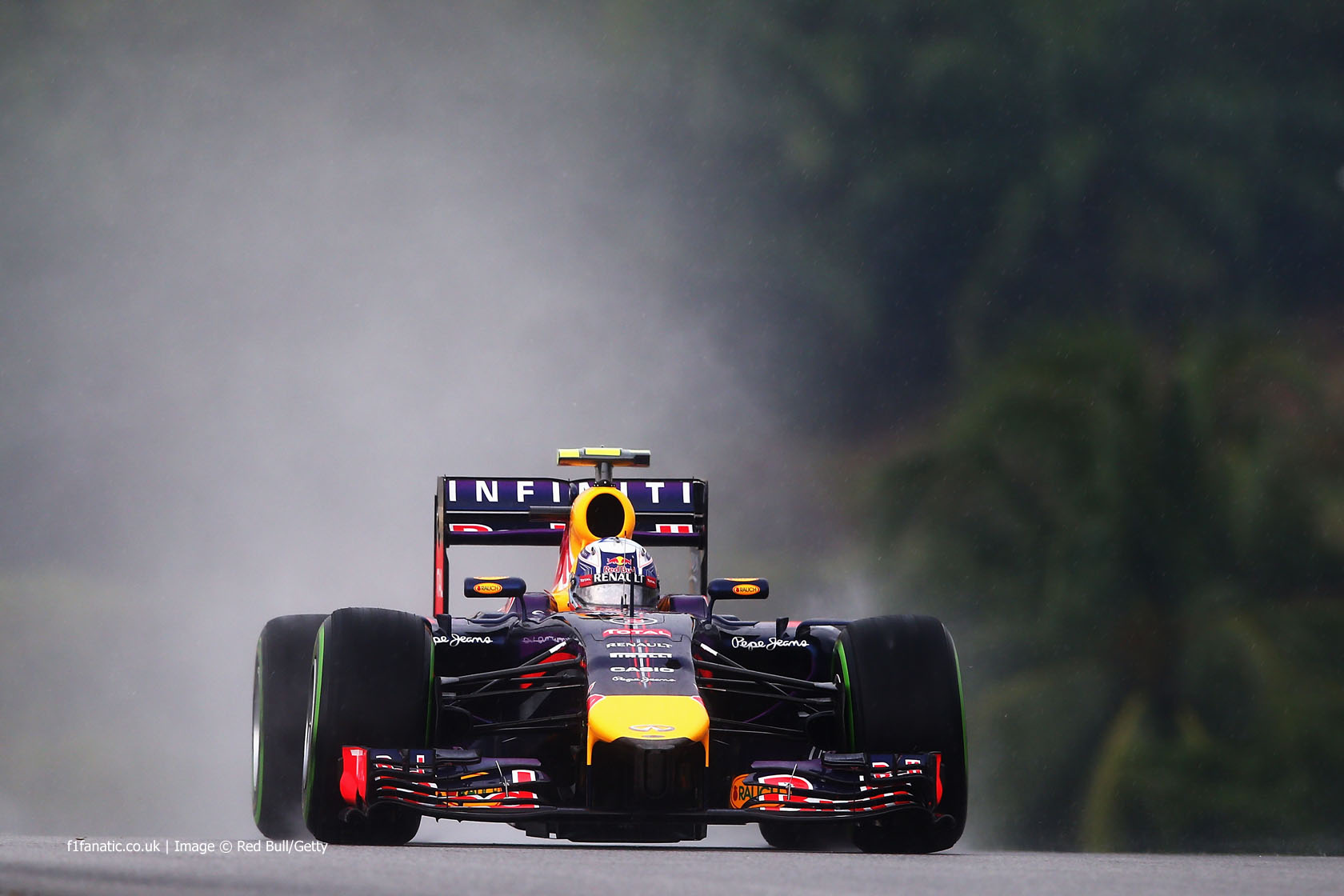 For the second race running a rainy Saturday meant a shake-up of the usual qualifying order. But of course this is only the second race of the season, so exactly what ‘the usual’ is in 2014 is not entirely certain.

What is clear is that it does involve a pair of silver cars going quite a bit faster than everyone else. So when Lewis Hamilton aborted his second run in Q3 that presented an opportunity for Sebastian Vettel – who had been just 0.055s slower on their first runs – to capitalise.

But he missed his chance. Heading into the last corner to begin his final lap Vettel was surprised to find Nico Rosberg on his inside. he backed off and didn’t get across the start line in time. Rosberg inadvertently helped his team mate towards pole position, afterwards he was under the mistaken impression he hadn’t been involved.

So as in Australia Hamilton will head the field on the grid with his team mate in his wheeltracks and a Red Bull separating the pair – Vettel this time instead of Daniel Ricciardo.

But does the world champion have a realistic chance of taking the fight to two cars which had up to a second per lap in hand at the first race?

While the local weather system has certain strongly defined characteristics – such as the regular afternoon storms – it is also volatile. Today’s heavy showers developed very quickly and instead of a brief downpour they lingered over the circuit, periodically topping up the track with more rain.

The threat of rain remains for tomorrow’s race and for most of Mercedes’ rivals it represents their best chance to get on terms with the W05s. The silver cars remained a full second faster than anything else on track in the dry final practice session – in the rain the other cars might at least have a sporting chance.

While Red Bull are patently at a disadvantage to Mercedes when it comes to top speed (see below) the RB10 wants for little in terms of downforce – as you’d expect. That’s the strongest card Vettel and Ricciardo have to play at the moment.

Red Bull’s lack of straight line speed is partly why they’re challenging the sport’s governing body over the fuel flow rate rules. If they have a repeat of the problem Ricciardo had in Australia Christian Horner is prepared to defy the stewards again – which could lead to another post-race disqualification. Vettel is not too disappointed in taking second on the grid as he believes it could put him on the more advantageous side of the grid. The racing line crosses the grid hatchings at Sepang and the pole sitter starts on the right, while the line cuts across to the left-hand side of the track for turn one.

Pole position was on the left-hand side of the grid until 2011, when it was switched to the right. The pole sitter hasn’t been beaten to turn one since then, but in 2011 and 2012 he was given a hard time by the driver who started second.

In 2011 pole sitter Vettel blocked Hamilton’s attempt to get down the inside, leaving him vulnerable to the Renault of Nick Heidfeld. Hamilton may want to extract some revenge for that as the roles are reversed for tomorrow’s start.

The looping first turn and tight second corner can be the scene of first-lap destruction. Last year Alonso sowed the seeds of an early retirement from the race by nudging Vettel’s car with his front wing. Assuming the race stays dry the high temperatures are likely to push drivers towards a three-stop strategy. The medium tyres are significantly faster than the hards, but they were degrading quickly during the searing heat of Friday afternoon practice.

The possibility of rain during the race will also act as an incentive for drivers to start on the medium tyres (everyone has free choice of tyres again due to the wet qualifying session) and continue using them for the first stints. Taking on the hard tyres early is a risk because is rain arrives and everyone has to use wet weather tyres, the obligation to use both types of slick is removed and any time spent on the slower hard tyre will have been wasted.

In terms of fuel consumption the race should not be as demanding as Melbourne. Of course in the event of a Safety Car period drivers will consume less fuel, and to a lesser extent that is also true of driving in wet conditions.

One scenario which is likely to play out as long as one team has a significant performance advantage over its rivals is how they handle team orders between their drivers – particularly when the need to conserve fuel and tyre life is pressing. It’s something Mercedes had to deal with last year, and they are most likely to be the ones who need to confront it again.

Despite the shake-up of the new rules and the vagaries of the weather, circumstances have conspired to give us a similar situation on the grid to what we saw two weeks ago: A Mercedes-Red Bull contest at the front, with Ferrari not far behind and Williams needing to make up ground after a poor qualifying session.

Whether tomorrow’s race is wet or dry could make the difference between another Mercedes rout and a much closer contest.

Will Hamilton make up for his Australian Grand Prix disappointment in Malaysia? Which of Mercedes’ rivals has the best chance to beat them?

Share your views on the Malaysian Grand Prix in the comments.