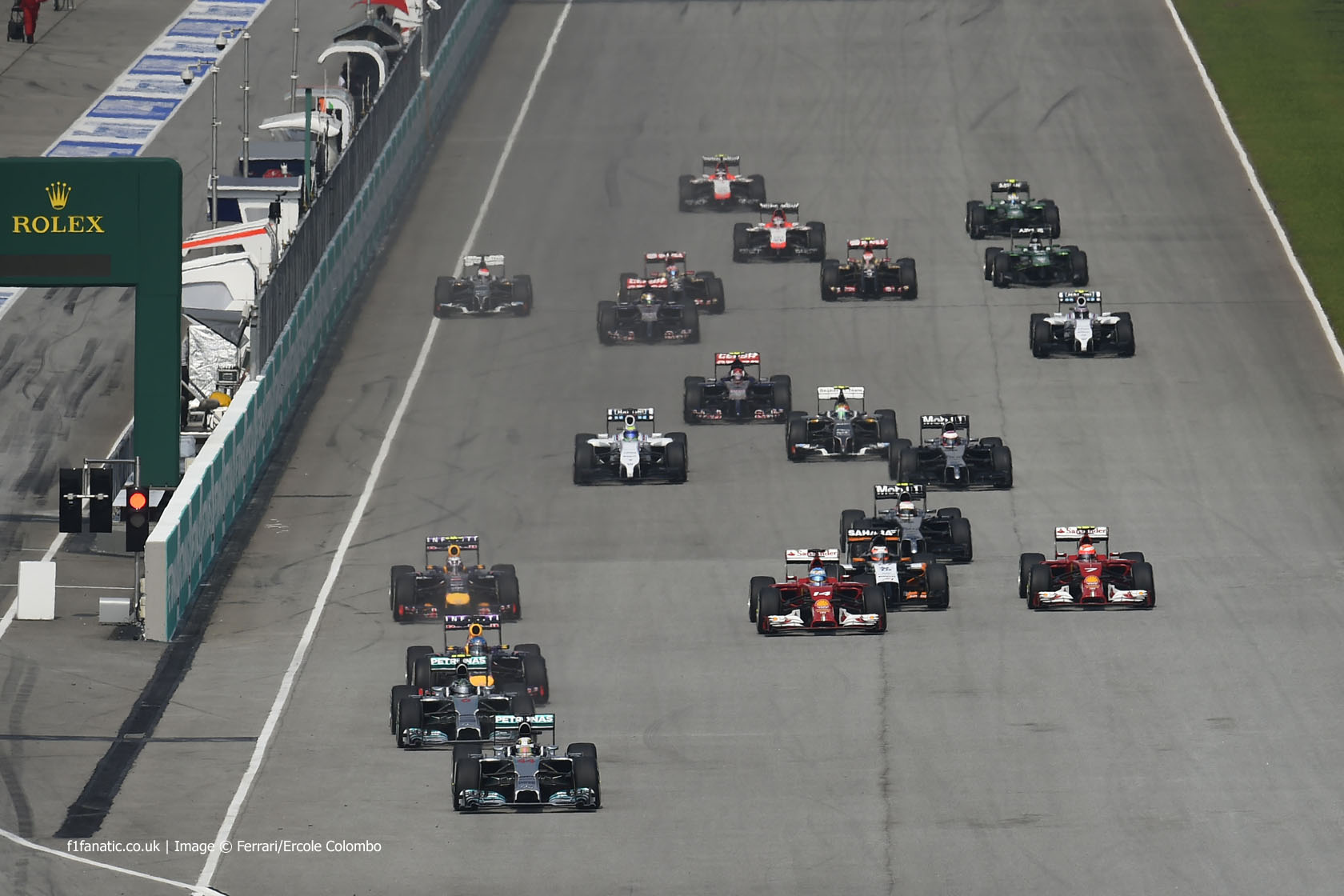 Which F1 driver impressed you the most during the Malaysian Grand Prix weekend?

Review how each driver got on below and vote for who you think was the best-performing driver of the weekend.

Sebastian Vettel – Had he not been surprised by Rosberg at the final corner during Q3 he might have had pole – as it was he lined up just a few hundredths of a second off Hamilton. Rosberg beat him off the line and he briefly dropped behind Ricciardo before reversing the positions. Dropped back from Rosberg towards the end of the race as he saved fuel, but third remained an impressive achievement for the team so soon after their dire testing campaign.

Daniel Ricciardo – Said he was “a bit off in Q3” and took fifth behind Alonso. But a superb start saw him pass the Ferrari and his team mate – and nearly Rosberg too. Vettel demoted him soon afterwards but Ricciardo kept pace with his team mate. But a string of misfortunes beyond his control ruined his weekend and, gallingly, left him with a ten-place penalty for Bahrain as well. Nico Rosberg – His first run in Q3, in the best of the conditions, was off the mark and though he managed to improve on his second run he missed out on a front-row start. He soon got up into second once the race began but seemed uncomfortable with his car’s balance and never got on terms with Hamilton.

Lewis Hamilton – Aborted his final run in Q3 as he found himself too close to Hulkenberg but held on to his pole position. Never looked like being caught in the race and, much like his team mate in Australia, was even asking his team if he could do any more to look after his engine in the final laps.

Fernando Alonso – Qualifying almost went badly wrong as he tangled with Kvyat, incurring suspension damage. Alonso had been driving particularly slowly on intermediate tyres while most others were on wets. He could have done more to avoid the incident and the same was true of Kvyat, who locked a wheel before hitting the Ferrari, damaging its suspension. Impressively Ferrari were able to repair it and despite wonky handling he took an excellent fourth on the grid. Made an early move to hard tyres during the race allowing him to attack in the final stint and see off Hulkenberg for fourth.

Kimi Raikkonen – Seemed to have an edge on Alonso in dry practice but the rain which arrived during qualifying served to highlight his continuing discomfort with some aspects of the Ferrari’s handling. His race was ruined by the contact with Magnussen which cost him a huge amount of time and left him with a damaged floor. Romain Grosjean – Although Lotus’s problems continued during practice Grosjean dragged his car into Q2 and then all the way to the chequered flag. He was pleased to keep Raikkonen behind for 11th despite losing downforce due to a broken diffuser.

Pastor Maldonado – Was hit by an out-of-control Marussia at the start, then dropped due to a loss of power. His car was retired soon after to avoid damage to his engine due to a fault with his turbo.

Jenson Button – A gamble on intermediate tyres in Q3 failed to pay off. But in the race he started well and was quickly up to seventh, from where he was unable to make any impression on Hulkenberg. Held off the Williams pair at the end.

Kevin Magnussen – Started ahead of Button again but an error of judgement spoiled his race when he tagged Raikkonen, damaging his front wing. He had a lonely end to the race, unable to rejoin the battle between his team mate and the Williams drivers. Nico Hulkenberg – Easily outpaced Perez in Q2 and took seventh on the grid. Tried to use a two-stop strategy to finish ahead of Alonso but had to relinquish the place in the closing laps, but that still left him a strong fifth.

Sergio Perez – Struggled with rear brake locking during qualifying and was knocked out in Q2. Failed to start the race due to a gearbox problem.

Adrian Sutil – Not getting an early ‘banker’ lap in during Q1 was a basic tactical error which left him 17th on the grid (promoted one place due to Bottas’s penalty). Gained places at the start and passed his team mate on lap 19 but an electrical problem halted him just after half-distance.

Esteban Gutierrez – Qualified 12th – a decent performance given the car’s lack of pace. Was passed by Kvyat early on and was running 13th when a gearbox glitch ended his race during his second pit stop. Jean-Eric Vergne – Made it into Q3 – at the expense of his team mate – but a problem with his power unit was immediately clear at the start of the race. Bianchi clipped him as the Marussia went past, leaving Vergne with a puncture. He retired shortly after falling to last place.

Daniil Kvyat – Lost two places at the start but fought back with a handy pass on Gutierrez at the first corner on lap five. Though he couldn’t keep the recovering Magnussen behind he held off Grosjean for his second points score in as many races.

Felipe Massa – Neither Williams driver made it beyond Q2, both switching between the intermediate and wet tyres as they tried to find some grip. From 13th on the grid Massa gained five places in two laps, but voiced his displeasure at his team mate’s driving as Bottas tried to pass. After spending the rest of the race stuck behind Button, Williams decided to let Bottas have a try, but Massa refused to let his team mate through.

Valtteri Bottas – Picked up his second grid penalty in a row but this time he was to blame after holding Ricciardo up during Q2. Once again he started very well and was soon on his team mate’s tail – which was where the trouble began. Jules Bianchi – Easily had the beating of Chilton in qualifying but threw away a good qualifying position by making contact with Vergne at turn four. The resultant puncture sent him spinning into Maldonado.

Max Chilton – Got onto Ericsson’s tail at the end of the race but couldn’t get past for 14th.

Kamui Kobayashi – Had yet more problems in practice, covering just a dozen laps before qualifying. However in the race his car ran reliably and he finished 40 seconds down on the Kvyat/Grosjean/Raikkonen battle.

Marcus Ericsson – Ran out of road at turn three during qualifying and smacked the barrier. But in the race he brought the car home, holding off Chilton in the final laps.

Who was the best driver of the 2014 Malaysian Grand Prix weekend?