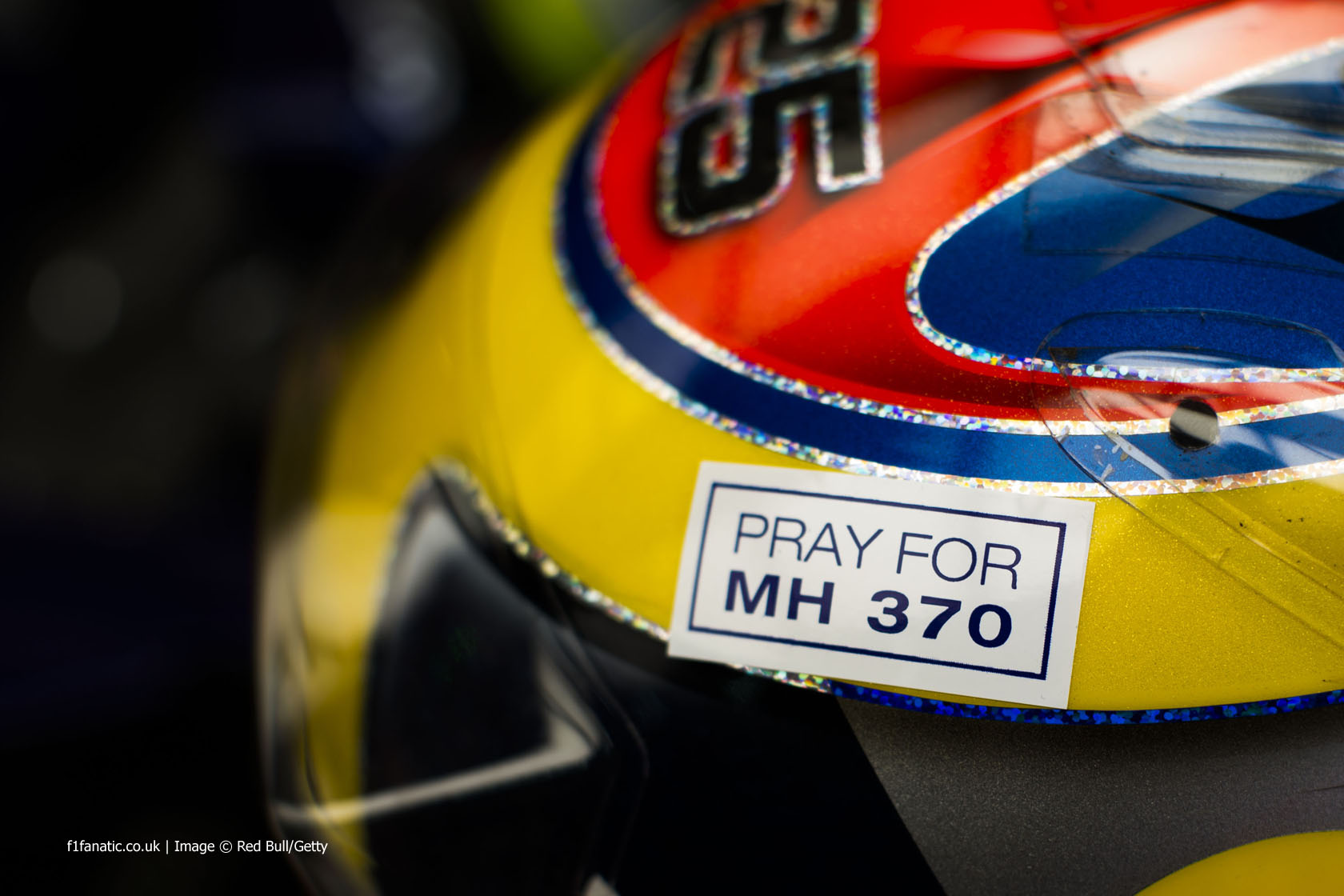 Formula One paid its respects to those who are believed to have lost their lives in the recent loss of a Malaysian Airlines plane in the Indian Ocean.

Drivers’ helmets bore messages of support for the victims and their families, and a one minute’s silence was observed before the start of the race.

Qualifying was disrupted by one of the usual Malaysian downpours but Sunday stayed dry and Lewis Hamilton romped to an emphatic win. Here’s a look back on the weekend in Tweets.

One of my favorites from the day. @JensonButton & birthday boy @therealdcf1 having a laugh in the #Formula1 pit lane. pic.twitter.com/TxwHTdOQV1

Here @Pastormaldo shows a total lack of respect for the law at the pitlane exit. He's a very naughty boy. pic.twitter.com/0XLufnYclc

In honour of flight #MH370, @jensonbutton and @kevinmagnussen wear 'Pray for MH370' on their helmets this weekend. pic.twitter.com/LZ2jYW5Te4

Welcome back to @sepangcircuit everyone! A hazy glow here in the #F1 paddock this morning; just over 1hr until #FP1! pic.twitter.com/VBm1qMrzrH

Rosberg reports a "problem with the car" as he struggles to get down to the pit lane speed limit on the way in. #F1

Hope we don't get a parking fine.

It's air-hose-down-the-shirt levels of hot down in the garage: full marks for ingenuity there! #PriMaxPower #F1 #FP1 pic.twitter.com/wH87GZNrrn

So it's either short wheelbase evaluation for @Pastormaldo in this session or he's not going out pic.twitter.com/zs3kSJVkHu

So, Kev's car went into 'limp home' mode – didn't quite manage that, but the marshals/mechanics got it across the line!

Chilton is back on track. He says he was improving on his last lap but ran out of MGU-K and then 'couldn't get car stopped'. #F1

We're seeing a lot more mistakes in dry sessions than last year. Shows cars are harder to drive. Will take that over V8 din any day. #F1

…Vettel doesn't realise it's a simulation initially and protests he didn't pass under yellows! #F1

Fabrice Lom head of power train for FIA helps to explain how these new fuel flow sensors work in a briefing. pic.twitter.com/aX7IWAB3YT

Well done Monisha shouting about the positive messaging of the new technology. The negativity in the sport has to stop. @OfficialSF1Team

The temperature made it pretty tough today but we're happy with the progress. I'll be pushing hard tomorrow for a top finish on the grid!

A first for 2014 – crew able to stand around in garage during a session as the car is on track. pic.twitter.com/GZWHINW3yn

Rennie to Ricciardo: "Start was good. You can be more aggressive on throttle at the end of first gear. Otherwise procedure was good." #F1

Magnussen: "I've got a problem with the engine, no power." He briefly got in Massa's way as he slowed down, Massa raises his hand. #F1

Interesting to see who of the drivers carries an umbrella for a woman! (@maxchilton @Marussia_F1Team ) pic.twitter.com/YC6Ev0nTEH

Ericsson's car has failed to get away. Bonnington to Hamilton: "We do expect rain in the session so make the early laps representative."

Ricciardo: "Get this [censored] Williams out of my way!" Rennie: "OK mate understood keep up the pace we're going to get one more timed lap"

#F1 CAM Security should be ashamed at the showing by the paddock gates this morning. Aggressive to fans waiting for autographs. #meatheads

Took a gamble and it didn't pay off today but hey ho! Tomorrow is another day and I think it'll be a very interesting one!

Aero+hard tyres. We knew this track would be a test for our car. Despite little preparation to the quali exam, now we know.

Gotta love a good Malaysian downpour. Spiced it up. P5 in qualy. Gonna have some fun trying to move on up there tomorrow & get amongst it ✊

Perez; "I am stuck in fourth gear. I am in the pit lane. I have no power basically." Joyce: "Checo straight into the box." #F1

Bottas told not to attack his team mate. "I have more pace" he replies. #F1

Bonnington tells Hamilton to turn his engine down to save it: "HPB2 to position two." "That's for both cars," he adds. Remember '13… #F1

All smiles from @nico_rosberg as he hands round the P2 trophy: back-to-back podiums and the #F1 Championship lead! pic.twitter.com/bFJgoQYW87

Funny chat with @LewisHamilton. Asked him how much he'd held back given how good his fuel rate was. "WHAT? You guys can see that? Oh man"

Tough day in the office, closed the gap at the end to cross the line 0.1 behind from 10 behind. -3kgs in body weight. pic.twitter.com/ID2vVS6wfY

That was the hottest I've ever been standing on the grid today! Crazy heat!!???? #scorchio #MalasyianGP

"Felipe your teammate is faster than you".. Massa must go crazy after hearing that again 😁

The words Massa never wanted to hear: "Felipe, Valteri is faster than you." Very pleased he behaved like a racer and didn't give way.

Hard weekend for us but with a clear step forward in term of development and solutions, still many thinks to improve with the E22

Enjoying dinner & a after work/10 points beer now✌️! Tmrw morning off to the middle east! pic.twitter.com/4cXH5af861

A win for @LewisHamilton is a win for @SilverstoneUK ticket sales for British Grand Prix.

Can't understand the reason of 10 place grid down penalty for @danielricciardo at Bahrain . FIA starts the double punishment system?

@takiinoue They like to kick a guy when he's down. And then run over him with the Safety Car.