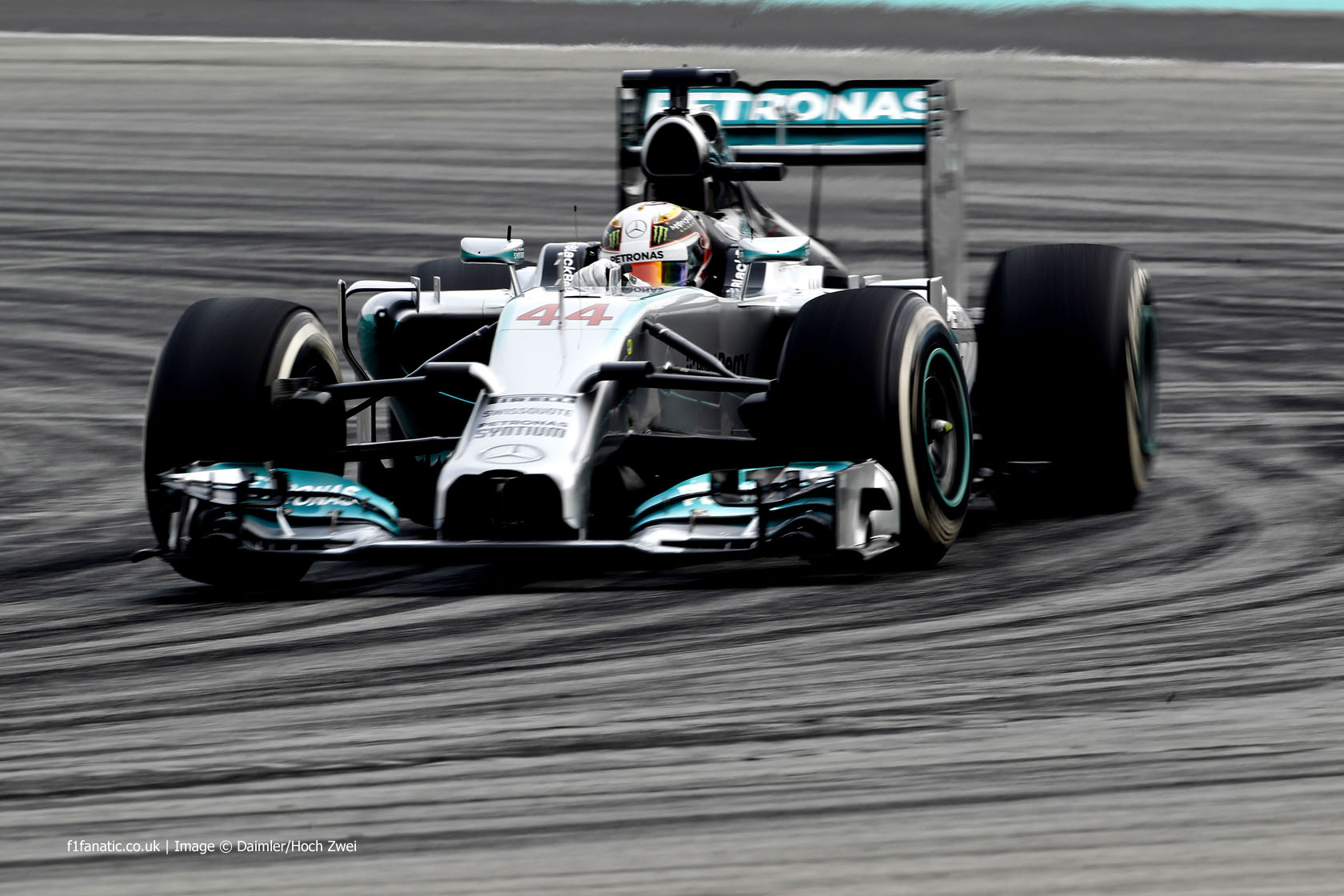 Lewis Hamilton was voted Driver of the Weekend after scoring his first ever ‘grand slam’ in the Malaysian Grand Prix.

Hulkenberg’s defensive driving against Fernando Alonso was a highlight for many fans while Sebastian Vettel was voted in third for his ‘best of the rest’ result behind the two Mercedes.

Mercedes looked a class apart in the final practice session and it looked to be a straight fight between them for pole, but the torrential rain that arrived just prior to qualifying closed the field up tremendously. Despite aborting his final run after he found himself too close to Hulkenberg, Hamilton held on to claim his second pole position in as many races this season.

A solid start – firing on the full six cylinders, unlike the five he was left with in Australia – meant this time he kept the lead into turn one and never looked back. He’d already opened a four second gap up by the end of lap three.

The only time Hamilton was headed in the race was when he exited the pits behind the two-stopping Hulkenberg, but passed him before he had chance to cross the line in the lead.

Hamilton’s advantage was so comfortable that much like his teammate in Australia, he asked if there was anything he could do to help look after the engine.

There’s only one answer here, right?

Lewis’ performance was the most brutally efficient I’ve seen by a non-Vettel driver since Silverstone 2008.
@Alehud42

Drove a very fast and controlled weekend. Handled the torrential qualifying conditions to take pole on what was supposed to be a banker lap.

He then converted the pole into a superb drive on Sunday. Drove more fuel efficiently, and was faster than anyone, finishing the race with considerably more fuel in hand than anyone else.
Chris (@tophercheese21)

Hamilton, for an emphatic win – all the while conserving his fuel better than almost anyone. You just can’t not vote for a grand chelem.
Max Jacobson (@vettel1)

Another solid qualifying from Nico Hulkenberg got him firmly into the top ten when his teammate fell in Q2.

Hulkenberg then got away well to fight the Ferrari’s into turn one before settling down and making a two stop strategy work while everyone else at the pointy end drove a three. Was the only man other than Hamilton to lead – even if it was only for half a lap – and his defensive driving against Fernando Alonso was one of the highlights.

Hulkenberg however brought that car to another spot where it should not be. He really is champion material. With the words of Ben Edwards: “There asn’t been a race where I wasn’t impressed by Hulkenberg.”
Sam (@Ardenflo)

I’ve gone for Hulk. Doesn’t matter whether he’s in a Williams, Force India or Sauber, he still manages to fight towards the front.
@Craig-o

Vettel could well have snatched pole on Saturday, but after being surprised by Rosberg at the final corner, slowed too much and missed the line by two seconds. A poor getaway saw him fall behind Rosberg and team mate Daniel Ricciardo, but Vettel recovered to hassle Rosberg throughout the race and finish best of the rest behind the Mercedes cars.

I voted for Vettel. Hamilton had such a dominant car he could do little else but cruise around in front. Vettel had to ring the neck of the Red Bull car to even challenge Rosberg. He drove a flawless race in an inferior car.
David Bretz (@Cynical)