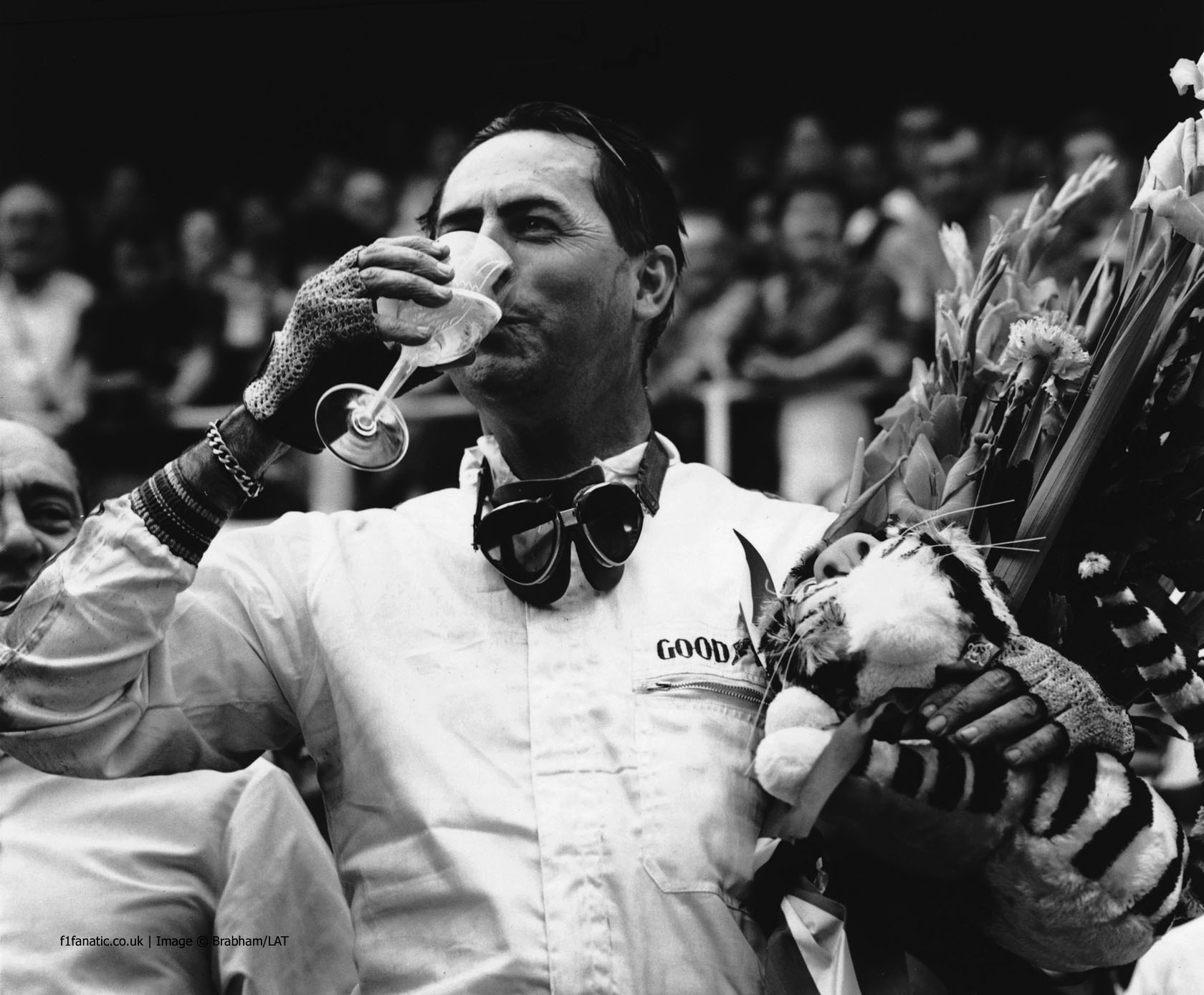 During 1966, the year Jack Brabham won his third, final and arguably greatest championship title, some sections of the motor racing press had begun to ask how much longer the 40-year-old was going to continue in the sport.

Irked by their questions, at Brands Hatch that year Brabham donned a novelty fake beard and leaned heavily on a jack handle as he hobbled onto the grid for the British Grand Prix. Underlining his point that there was still plenty of fight left in him, Brabham won the race – his second of what turned out to be four consecutive triumphs that year.

But one of the many remarkable things about Brabham was that, unlike so many of his peers in that perilous time, he survived the sport and became its oldest living champion.

Sadly, Brabham passed away in early this morning at his home on Australia’s Gold Coast. He leaves behind a growing dynasty of racing Brabhams: his sons Geoff, Gary and David all raced F1 cars, and grandsons Matthew and Sam are competing in junior categories.

Born in Sydney in 1926, Brabham cut short a three-year engineering course to join the Australian air force at the age of 18, during the final years of the Second World War. After hostilities ceased he began racing midget cars, and found his engineering abilities were matched by a talent for car control.

Brabham was already married with one son when in 1955 he headed for his grandfather’s homeland, Britain, to further his career. Having enjoyed considerable success at the wheel of a Cooper in Australia, Brabham soon began working for John Cooper’s company, who were poised to revolutionise motor racing with their rear-engined cars.

Brabham began the 1959 season – his third full campaign – with victory in the Monaco Grand Prix, which he followed up with another win at Aintree. He arrived at the season finale in Sebring leading the points but with Stirling Moss and Tony Brooks within range.

But Brooks lost ground early on and Moss retired after five laps. Brabham didn’t need to push his Cooper across the line into fourth place when he ran out of fuel in order to win the title, but he did so anyway.

The following year he reeled off five wins in a row at mid-season to retain his crown. But Cooper were not competitive following a change of engine formula in 1961, and six years passed before Brabham won a round of the championship again.

In the meantime they took the rear-engined revolution to Indianapolis, where the performance of Brabham’s underpowered but lighter and better-handling Cooper surprised the speedway regulars in 1961. The only non-American in the race finished ninth, a result he did not better in three subsequent appearances. But Brabham had turned his attention to a new project – his own racing team, which produced its first car in mid-1962. Their breakthrough came in 1966, a year of drastic change for Formula One as maximum engine capacities were doubled to three litres.

Brabham’s third championship victory that year proved the landmark achievement of his career as he won it driving the Brabham BT19 chassis he developed with designer Ron Tauranac, powered by V8 engines which were produced by Repco at Brabham’s urging.

As a driver-engineer, Brabham placed greater value on the importance of having a car that would finish races than the likes of Lotus’s Colin Chapman, who some felt made too many sacrifices in the name of reducing weight. The Brabhams may have erred on the conservative side but in a year of upheaval in the regulations his finishing rate was a cornerstone of his championship success.

Brabham played down his role in developing the cars which were designated ‘BT’ for Brabham and Tauranac. “The idea people were apt to get from the press, that Jack Brabham built a grand prix car all by himself in his back garden, is a bit far from the truth,” he wrote in his 1971 autobiography.

Nonetheless it was a unique accomplishment, on top of which Brabham became only the second driver after the great Juan Manuel Fangio to win three championship titles.

He nearly made it four, but the following year early-season unreliability left him playing catch-up to his team mate. Brabham eventually lost the title to Denny Hulme by just five points.

Brabham saw too many of his rivals killed and wounded not to do his part in the drive to improve safety standards, which was gathering pace as he neared retirement. In 1970, his final year of racing, Brabham gave his vital backing as the sport’s elder statesman when his fellow drivers refused to race on the dangerous Nurburgring Nordschleife. An important victory was won when that year’s German Grand Prix was moved to the Hockenheimring.

Brabham’s victory in the season-opening race at Kyalami set him up for another tilt at the title but it proved to be the final victory of his career. He was on course to win again at Monaco only to crash at the final corner while lapping traffic as Jochen Rindt closed on him.

Rindt won again at Brabham’s expense at Brands Hatch – this time the BT33 ran out of fuel – and was on the verge of claiming the title when he was killed at Monza. Brabham waited until practice for the final race of the year before confirming his retirement, by which time Rindt had already become the sport’s only posthumous world champion.

McLaren chairman Ron Dennis, who was Brabham’s chief mechanic at the time of his retirement, paid tribute to the man whose unique achievement made him one of the sport’s true greats:

“The word ‘legend’ is often used to describe successful sportsmen, but often it exaggerates their status. In the case of Sir Jack Brabham, however, it’s entirely justified.

“When I started out in Formula One in the late 1960s, I worked first for Cooper and then for Brabham. Even as a callow youth, I could recognise greatness when I saw it, and I’ll always regard it as an honour and a privilege to have worked for Sir Jack. I learned a lot from him too.”

Brabham blended the talents of racing driver and engineer in a way others – including Bruce McLaren, Graham Hill and John Surtees – achieved without the same success.

He was also a trailblazer among Australian racing drivers, and thanks to his endeavours the sport has enjoyed a succession of Australian talent from Alan Jones to Mark Webber and Daniel Ricciardo.