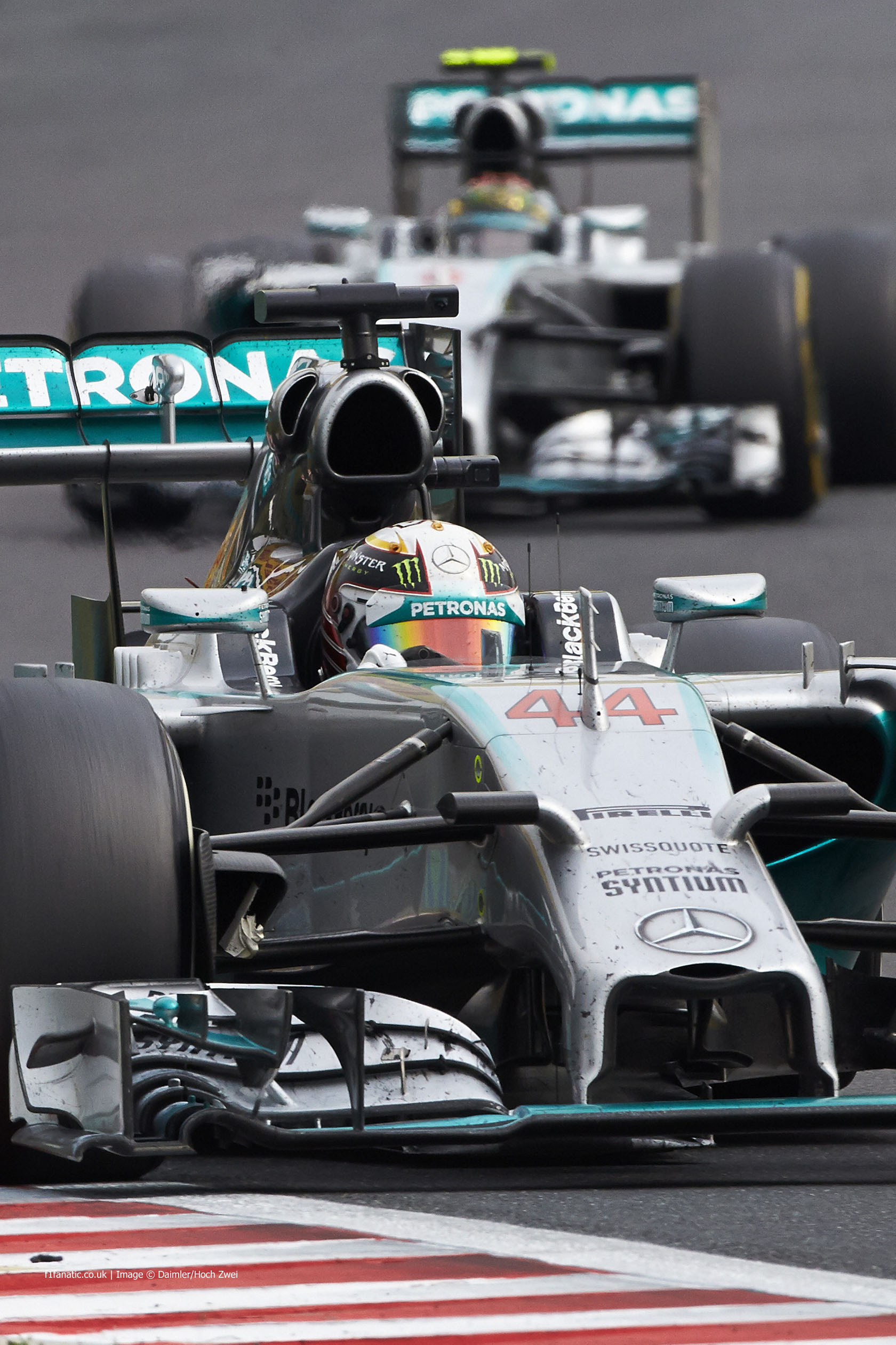 Mercedes say they are satisfied with Lewis Hamilton’s driving in the Hungarian Grand Prix despite him refusing an instruction to let his team mate past.

During the second of of the race Hamilton was told not to hold Nico Rosberg up and then ordered to “let Nico past on the main start/finish straight”.

However Hamilton kept his position, saying “I’m not slowing down for Nico”.

Rosberg asked more than once why Hamilton hadn’t moved aside for him. After the race he said Hamilton’s failure to let him past was “obviously not good”.

But Mercedes now say Hamilton acted correctly because Rosberg did not get close enough to him.

“When the Safety Car came out, we chose to split the strategies, and offset ourselves to the cars ahead, in order to create opportunities to win, or worst case finish on the podium,” Mercedes motorsport director Toto Wolff told the team’s website.

“When we did so, Nico was running two positions in front of Lewis. We put Nico onto an aggressive three-stopper and Lewis onto a two-stop, with a long final stint on the [medium] tyre. That meant they would find each other on track at some point – and we would have a situation to manage.

“Lewis was asked to let Nico pass because we believed they both still had a chance to win the race as the strategies played out. But Nico never got close enough to Lewis to make the move – and we were ultimately comfortable with the decision Lewis made to hold position.”

Wolff said the team believed both drivers were capable of winning the race at the time.

“As a racing team, our mission is to win championships and to win races. We thought both of our drivers had a chance to fight for the race win – not just for a podium finish – so we acted accordingly.

“When it comes to drivers in the same team running alternative strategies, it is usual for them not to make life hard for each other when it comes to overtaking. But we must appreciate that we are not in a usual situation any more.”

The team intend to continue giving equal treatment to both drivers, Wolff added:

“At the start of the season, [executive director for technical] Paddy [Lowe] and I agreed a clear policy with the drivers that they are free to race for the win – as long as they are fighting for it.

“Equally, we have been clear that our priority as a team is always to give ourselves the best chance of winning the race – no matter which driver is fighting for it. The calls Paddy and the team on the pit wall made on Sunday were completely in line with our policy.

“And so, our drivers will continue to be free to race for the remainder of the 2014 championship; and they will be racing to win.”

However Wolff added the team’s biggest problem at the moment was not sorting out the tactics between their drivers.

“We should also be clear-sighted about the situation: this debate about team orders is obscuring our real problem at the moment, which is reliability.

“If we give the drivers the opportunity to use the full potential of the car on every lap, then we have the performance to race at the front of the field – and they will be free to race for the win without external factors playing a role. We haven’t done that recently and that has given us some headaches. But those problems can be avoided if we do a better job.”