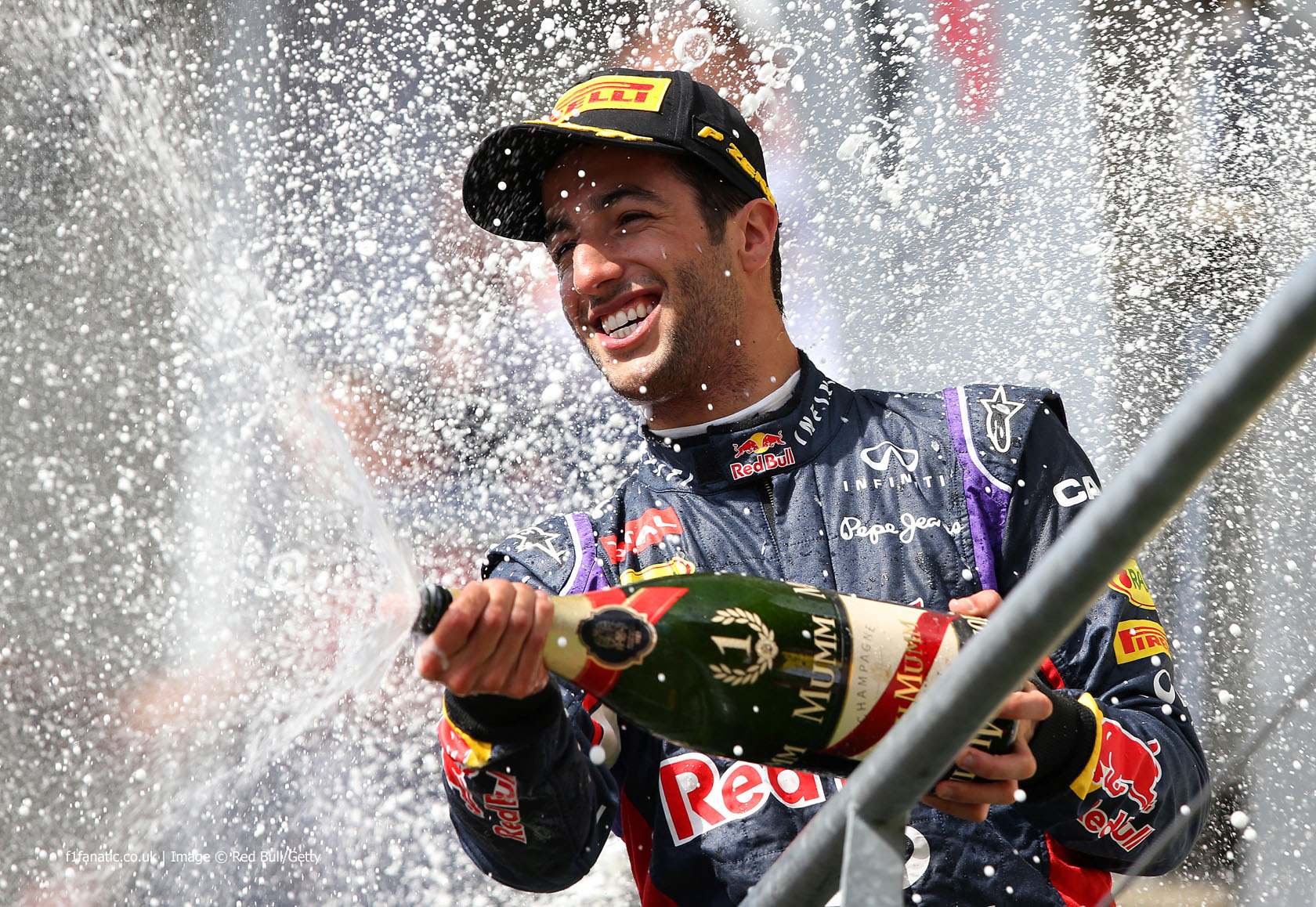 Daniel Ricciardo earned his second Driver of the Weekend win after claiming an unlikely victory in the Belgian Grand Prix.

Taking 44.4% of the vote Ricciardo topped the poll comfortably ahead of Kimi Raikkonen, after the Ferrari driver took a season-best of fourth at Spa-Francorchamps.

Valtteri Bottas, who passed Raikkonen for third place in the closing stages of the race, made his fifth appearance in the top three of the vote this season.

Despite having the upper hand with more practice time Ricciardo couldn’t get the best from his car during the tricky qualifying conditions, and ultimately ended up only fifth with his team mate third, best of the rest behind the Mercedes cars.

Come the race though it was Vettel who struggled – a mistake at Pouhon allowed Ricciardo through into second, and he never looked back. As the two Mercedes’ were cleared from his path by their collision, Red Bull refused to be drawn into strategy games and stuck to their two stop plan.

Ricciardo executed this to perfection, timing his laps perfectly to hold off the charging and recovering Nico Rosberg to take his third win of the season.

Once again he was the one who capitalised when Mercedes dropped the ball.

Relatively unspectacular in practice and qualifying, and his Q3 mistake arguably cost him third on the grid but his sublime race outshone everyone else by a mile.
Lewis McMurray (@celicadion23)

Ricciardo is getting every superlative thrown at him but the sum of his race was inheriting positions. No harm in that but nor does it really qualify him in my opinion.
Bobby (@F1bobby)

All Raikkonen’s been claiming he needs all season is a clean weekend, and Belgium – arguably his best circuit – finally produced that. He was closer than usual to Fernando Alonso in qualifying and made it count in the early part of the race, using his newfound pace.

Ferrari opted for an aggressive two-stop strategy with an early first stop, and Raikkonen reaped the rewards come the race end. He used the strategy to good effect – running quickly while in clean air – and claimed his highest finish of the season so far, only just being beaten to the podium in the final five laps.

Raikkonen. He weighed up in a race for the first time this year.
JayfreeseKnight (@jeff1s)

Went for Raikkonen too, but it was a close call between him and Magnussen.

Was fast in Q1 and Q2 despite having missed some of the practice running and made an aggressive two-stop strategy work, nursing the tyres (it reminded me a bit of his Australia 2013 race). For the first time of the year, he didn’t look slower than his team mate.
Patrick (@Paeschli)

During practice it looked as though Williams would once more be able to take the fight to Mercedes in qualifying, but the rain – a nemesis for Williams this season – but paid to that hope. Bottas had to settle for sixth on the grid but he made up the important ground early on, passing Alonso on lap eight.

During the second stint took advantage of Rosberg’s delay behind Sebastian Vettel to temporarily move ahead of the Mercedes. Although Rosberg later got back ahead, Bottas was able to use the straight-line speed of his Williams to power past Vettel and Raikkonen to take his fourth podium of the season.

Bottas is the only choice for me. The only one who got the maximum out of his package over both qualifying and the race. Some say qualifying sixth was poor but they forget that the Williams always is less competitive in the wet, and he was faster than his team-mate too. Something Ricciardo hasn’t managed to do. In the race Bottas did all the overtaking required to get the maximum result possible without any mistakes whatsoever.
@Montreal95

29 comments on “Third win, second Driver of the Weekend for Ricciardo”