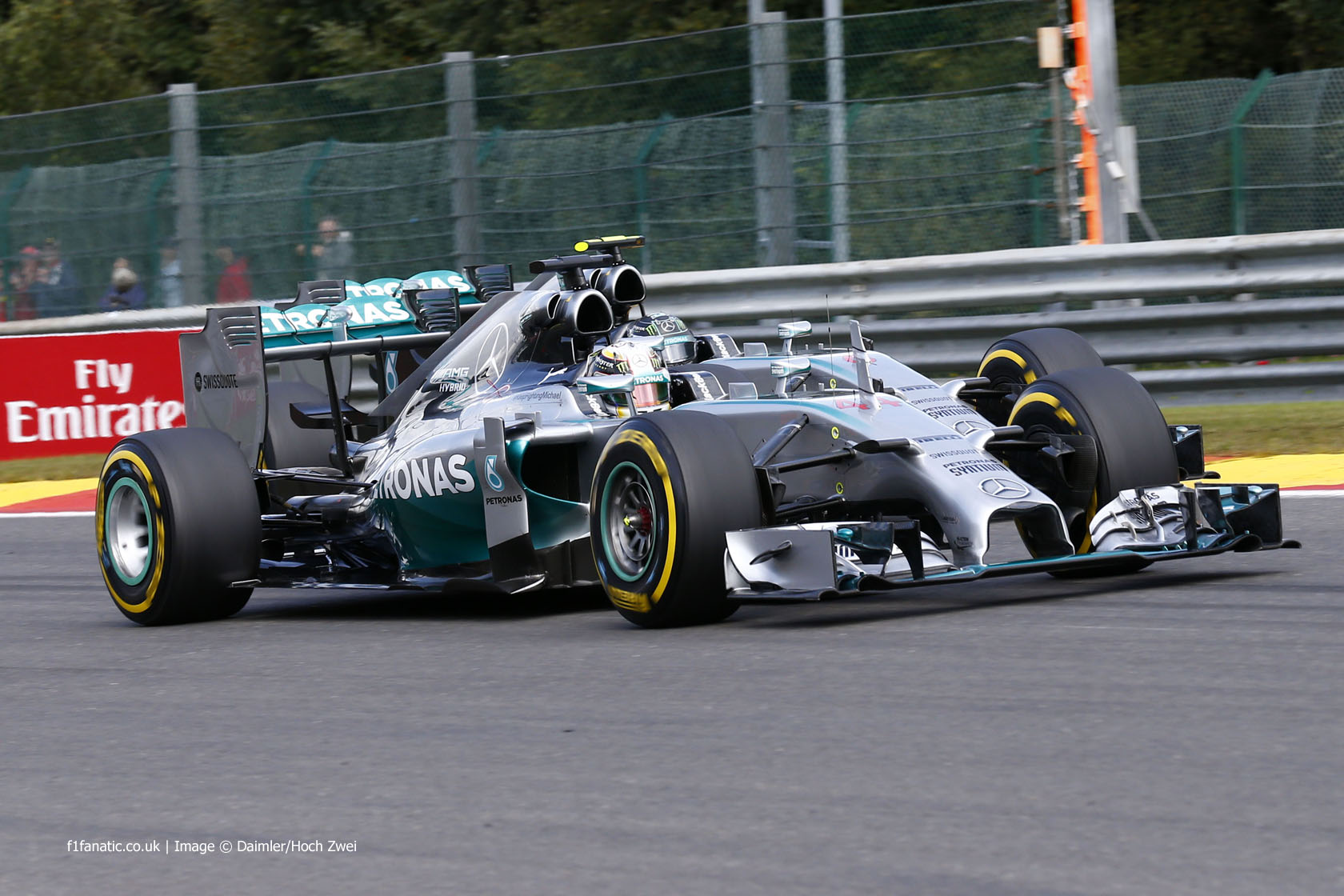 Lewis Hamilton and Nico Rosberg say nothing has changed in their approach to racing each other as they prepare to resume battle at Monza.

Mercedes read their drivers the riot act after the events of Spa – but they also told them they were free to keep racing each other.

Sunday’s race will show whether Hamilton and Rosberg are going to repay that trust – or whether they’re going to keep raising the stakes ever higher as the battle for the championship increasingly turns into a grudge match.

But for Hamilton the imperative is to stay out of trouble and cut into his team’s mates 29-point advantage in the standings. Another result as bad as Spa (or Montreal or Melbourne) would leave him at a serious disadvantage in the points standings.

With Hamilton on pole position and Rosberg behind him, there will be a few million eyes keeping a very close watch on where Rosberg’s front wing goes as the pair negotiate the Rettifilio chicane on the first lap.

But will the Mercedes drivers play safe with each other? Asked after qualifying Mercedes’ warnings will be “ringing in their ears” Hamilton simply said: “They won’t be ringing in my ears at all.”

Rosberg added their approach to racing each other “has not changed”.

“Already before, when we started the season, the message has been clear – so there’s no real change at the moment. So, from that point of change it’s the same as always, in a way.”

But the Mercedes drivers may have more to worry about than each other. Behind them the two Williams drivers are waiting to pounce. Both Valtteri Bottas, third, and Felipe Massa behind him have made strong starts this year.

Monza’s 380-metre run to the first corner is one of the longest of the season and that can allow drivers to attack from further back on the grid. In 2011 Fernando Alonso powered into the lead from fourth. For Rosberg to finish in front of Hamilton, he’s almost certainly going to have to pass his team mate on the track. Mercedes are scrupulous about not giving one driver a strategic advantage, and at any rate it’s unusual to see drivers make more than one pit stop at Monza. The high speed nature of the circuit means a lot of time is lost coming into the pits.

In qualifying Hamilton was quicker in the middle sector of the lap, Rosberg in sector one. That, and Rosberg’s higher straight-line speed, indicates he’s running slightly less downforce, which could help him attack on the straights.

All the drivers in the top ten will start on the medium compound tyres. Hamilton had a small lock-up on the set he will start the race on but said afterwards he wasn’t concerned about potential damage. “I didn’t have any problems with the tyres when I finished the lap, so they’re fine,” he said.

Friday practice indicated the Williams cars may have the pace to apply some pressure to Mercedes in the race. It’s another reason why Mercedes need to impress upon their warring drivers the fact they have 20 other rivals on the track.

“I am really happy with the qualifying lap and the car is set-up for the race so I am confident we can push the Mercedes,” said Valtteri Bottas, who starts third, “it’s just a question of how much can we push them”.

After one of their strongest qualifying performances of the year, McLaren have an opportunity to reinforce their margin over Force India in the championship. But some of the drivers behind expect to be able to challenge them during the race.

“We should be quicker than McLaren tomorrow,” said Sebastian Vettel, who starts eighth alongside Alonso. “I’d say we’ll be about the same as Ferrari, while Williams and Mercedes will likely be a bit too quick for us.”

How do you expect the latest chapter in the Hamilton-Rosberg battle to unfold? And can Williams take the fight to Mercedes?

Share your views on the Italian Grand Prix in the comments.