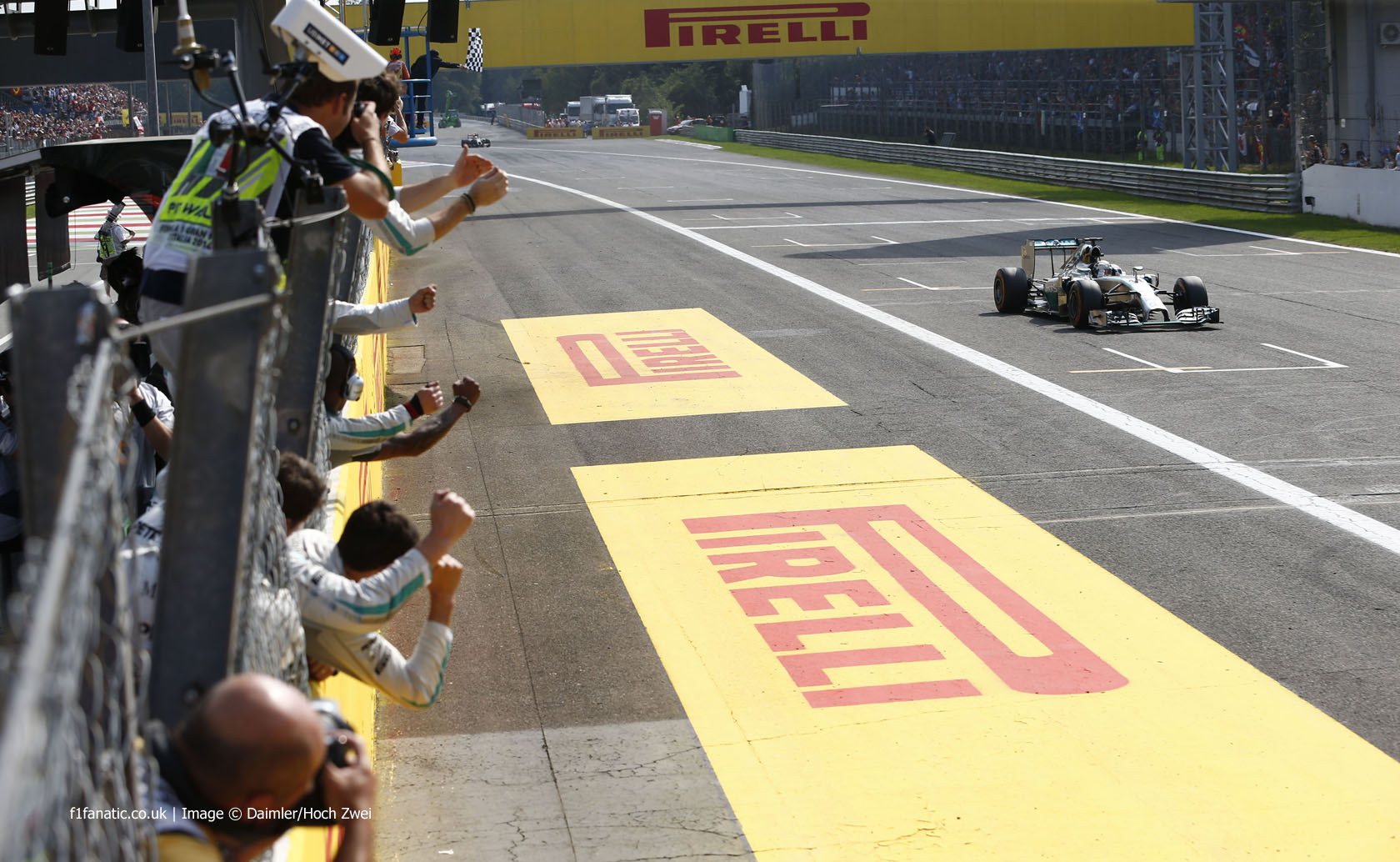 Lewis Hamilton took his 28th career win at Monza. It was his sixth win of the year – the most races he has ever won in a season.

Team mate Nico Rosberg has won four times yet retains a 22-point lead in the drivers’ championship with 175 left to be won. Hamilton still has a good chance of winning the championship, but he can ill-afford another setback.

There remains a strong possibility Hamilton could end the year with more wins than Rosberg but fewer points. This has happened on 12 previous occasions in F1 history, but only once in the last two decades.

On that occasion, in 2008, Hamilton was the beneficiary, pipping Felipe Massa to the title by a single point despite having won one race fewer than his rival. However Hamilton controversially stripped of a victory at Spa that year, which was handed to Massa. Hamilton was in strong form all weekend, setting his 36th pole position and 17th fastest lap – the latter giving him as many as Rubens Barrichello. This was the fourth pole, fastest lap and win ‘hat trick’ of his career.

Rosberg followed him home for Mercedes’ seventh one-two of the season. They have six races left to beat the all-time record of ten set by McLaren in 1988.

As Mercedes clearly are capable of scoring one-two finishes in all the remaining races, it’s revealing to look at how this could determine the championship. Heading into this weekend’s race there were 128 permutations for how Hamilton and Rosberg could finish first and second, and in only seven of them (5.5%) would Hamilton win the title.

Now there are 64 different ways they could finish one-two in the six remaining rounds. Six of these would result in Hamilton winning the title (9.4%). Note that Hamilton could lead Rosberg home in the next five consecutive races, but still lose the title by finishing second to him at Abu Dhabi, thanks to double points.

You can see how all the scenarios could play out using the points calculator:

This was Mercedes’ 23rd win of all time, making them the ninth most successful F1 team ever in terms of race victories. They are tied with Tyrrell, who can be traced back in the lineage of the current Mercedes team. Tyrrell’s championship entry was purchased by British American Racing in for their new team in 1999. They built the headquarters at Brackley which Honda took over in 2006. When Honda pulled out it was run for one season as Brawn GP, following which Mercedes took over.

Felipe Massa made his 37th appearance on the podium and his first not wearing Ferrari overalls. His team mate Valtteri Bottas finished fourth and moved up to fourth in the championship, one point ahead of Fernando Alonso. The Ferrari driver failed to score a point for the first time this year after his Energy Recovery System failed. That’s only the second time out of his 90 starts for Ferrari that a reliability problem has forced him out of a race. His last such failure was 86 races ago, when his engine failed in the 2010 Malaysian Grand Prix.

It ended Alonso’s streak of 15 consecutive points finishes. Daniel Ricciardo now has the longest running streak having scored in the last 11 rounds. Kimi Raikkonen upheld Ferrari honours with ninth place which extended their record streak of consecutive races in the points to 80.

Finally, the penalty points table has a new leader. Marcus Ericsson was given three penalty points for failing to observe double waved yellow flags during final practice, moving him up to five.

Spotted any other interesting stats and facts from the Italian Grand Prix? Share them in the comments.

64 comments on “Hamilton having strongest season yet with sixth win”