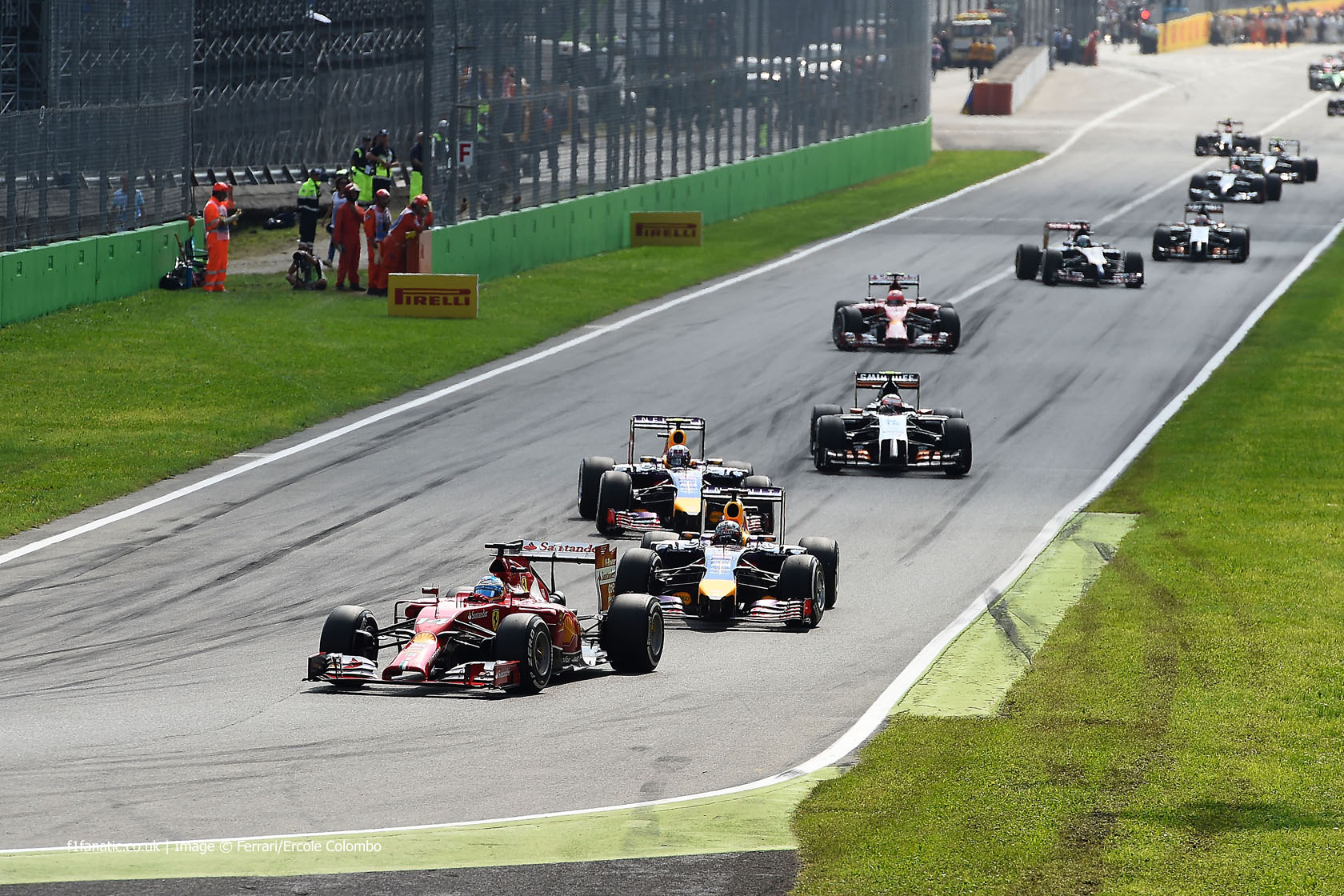 The Italian Grand Prix seemed to have been decided within seconds of the start, as Lewis Hamilton slipped to fourth and Nico Rosberg seized the initiative.

But it was just getting started. Hamilton quickly went after his team mate and, having made it up to second, the sight of him looming large in his mirrors seemed to pressure Rosberg into making the mistake which gave Hamilton the win.

As has often been the case this year, there was plenty of action going on behind the Mercedes pair and we witnessed some marvellous scraps for position between the others. A single pit stop may have been the preferred strategy but with the Red Bull drivers in particular stretching the limit of how early or late they could pit, this created opportunities for close racing in the final laps.

Bottas, Riccardo, Perez and Button were among those who impressed with their tough but fair racing. That seemed to go down well with F1 Fanatics, who gave the race a solid average score of 7.4 out of ten.

A poor race for home favourites Ferrari did little to sap the enthusiasm of the crowd, which I had the fortune to witness first-hand. The atmosphere was incredible, though I was surprised to hear more cheers for Raikkonen than Alonso – the latter may be far ahead in the points but the latter is of course Ferrari’s most recent drivers’ champion.

I sat on the first corner for most of the sessions and observed many drivers braking too late and taking the slip road, however it definitely seemed to be Rosberg who did it more often than the others.

It was my first time hearing the turbo engines and after all the complaints, I was pleasantly surprised. The cars are not as loud as they used to be, but they do sound great, and more enjoyable than the GP2 in my opinion. As a plus, the volume allowed you to hear the tyres screech along with the commentary.

Here’s what the rest of you made of the Italian Grand Prix.

I joined in the tradition post-race sprint to the podium along with the other fans and it was great to see even the Ferrari supporters were still in high spirits. Sadly none of the speakers seemed to work for the podium interview. I thought that was a shame as I was led to believe they did the interview on the podium for the spectators benefit.

The great Monza crowd for podium: proudly waving Ferrari flags even when Ferrari are not winning, and showing their appreciation for Massa. They do not forget their Ferrari drivers.
Kpcart

The polystyrene blocks at the turn one run-off had to be replaced a few times during the weekend, especially after a Porsche Supercup driver smashed through them all trying to catch the others up after a spin.

However for the most part it proved a useful deterrent to corner-cutting.

What I think was particularly important was that unlike many venues errors had repercussions. A driver making a mistake such as his breaking error lost out by a small amount of time.

All tracks should have this built in. Spa has it as we saw Vetted lose a place by running wide at the end of Les Combes straight. But Canada earlier in the year didn’t.

Physical barriers such as at tracks like Monza and Spa are the best way of having safe run-offs (instead of gravel) but with an unavoidable penalty. This is very important factor when looking at track design and satisfactory outcomes from drivers’ mistakes.
BenBailey

The hard-fought battle for the lower half of the points places provided much entertainment.

Very fair fights from Bottas and Perez (this is how you do it Magnussen).
@Peartree

Great recovery by Hamilton scared Rosberg off the road, Great drives by Ricciardo and Bottas. Finally Massa on the podium again.
@Tino852

Really loved the save of Kvyat! Heroic stuff. Apart from that incident, a lot of expectations, but almost none fulfilled. Credits to Ricciardo though, intelligent moves.
@Polestar31

Sitting at the first corner it looked like most of the cars fighting for position entered the corner neck-and-neck which made the corner very exciting. There were mixed opinions on DRS in your comments.

I have to say I think I mind DRS even less now that you can pass without it. As we saw today drivers were fighting back through the Curva Grande into Variante Della Roggia, so DRS was stong enough to initiate a fight but not strong enough to conclude it (most of the time). Which, in my honest opinion, is how DRS should always work.
@vmaxmuffin

The added effect of slipstreaming and the difference in drag between the cars already created a ‘DRS effect’. You could see Bottas close up to cars even when both had their DRS open.
@Patrickl

DRS made 90% of the passes far too easy ans they were just no fun to watch. Seriously, how much longer do we have to put with this Dumb Racing System?
RogerA

DRS is part of why we are enjoying the racing even more than we have done in the past, in most cases this weekend if you had bothered to look at the car being passed it also had its wing open, which in-effect cancelled out the DRS.
Lethalnz

Needed a fight for the lead

Any battle for the lead was gone once Rosberg made that mistake. Massa had a quiet race in third, and it was obvious that Bottas would make up positions easily due to the speed of the Williams. The fights between Vettel, Ricciardo, Magnussen, Perez and Button were good to watch, but that was about it really as far as the action goes.

Plus, the race was so short, something I never like!
@Jamesjames123abc

There weren’t practically any battles for the first three positions, except some tension, which didn’t live up to expectations. Of course, there were battles for lower positions, but they weren’t very meaningful.
@Osvaldas31

I didn’t like it a lot. The start was promising, but race was decided just through halfway and the midfield fights couldn’t make up for this.
@Favomodo

“A golden season for F1”

Loved it. Proper race refreshingly free of multiple tyre stops and nagging race engineers (and Hamilton completely ignored the instruction to stay two seconds behind, good man). Great passing skills from Ricciardo and Hamilton, and Bottas used his car’s strengths and DRS well. As good as it gets while there’s one or two teams clearly better than the rest.
@Bullfrog

I thought it was a great race.

The opening few laps seemed a bit quiet and I wasn’t optimistic about the rest of the race but after that there seemed to be action throughout the race.

Then there was Ricciardo late stopping and charging through putting in some impressive overtakes to finish fifth and finally we had a good battle between Perez and Button.
@Pja

Best race at Monza for a long time and awesome battles throughout the field! This is a golden season for F1. That I am sure of.
@Bobby-balboa

I rated it highly because the lack of pit stops kept the cars together forcing them battle each other on track, there was action all through the race, rather than just at the end.
@Hohum