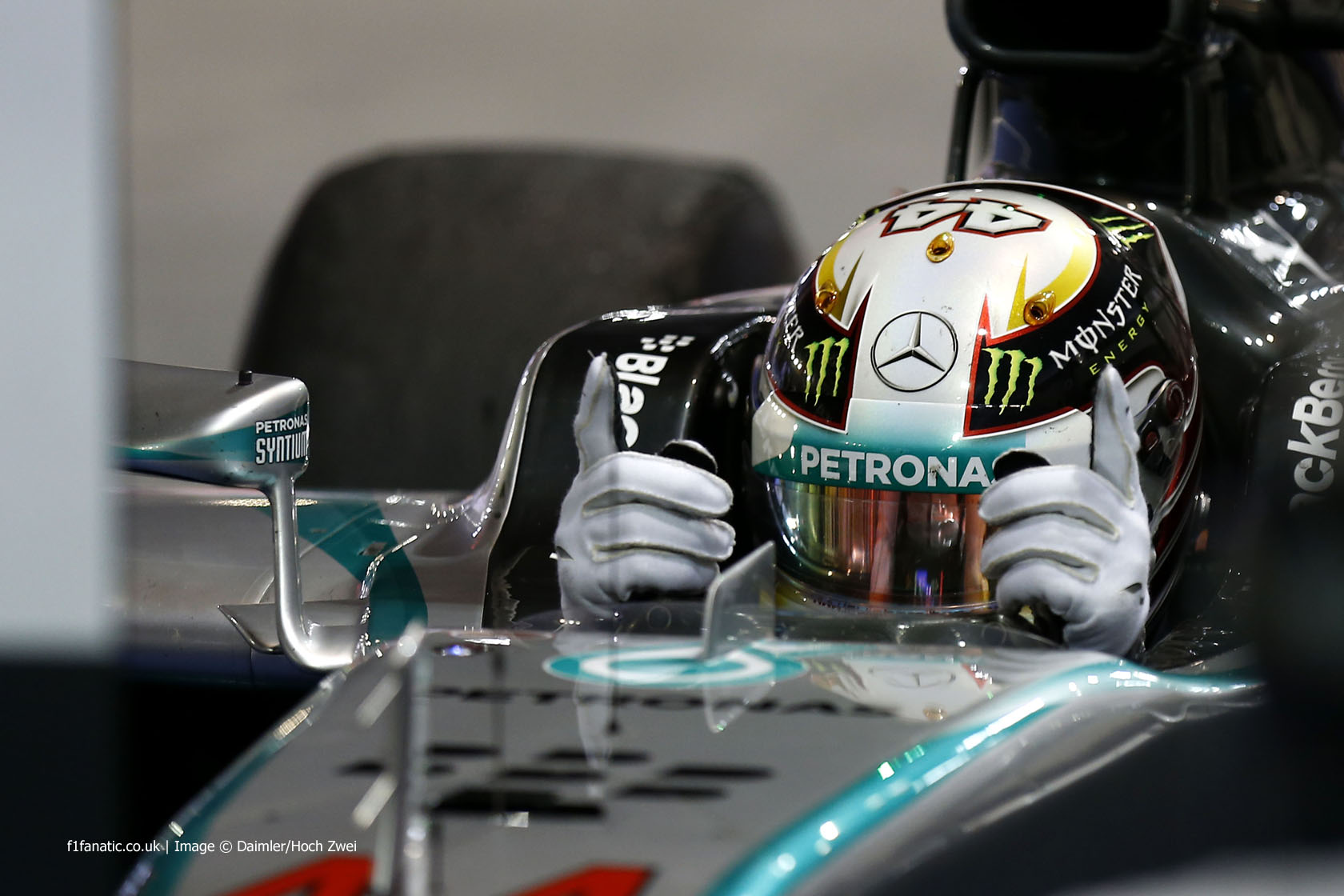 In the story of the 2014 championship battle, the Singapore Grand Prix will rank as a footnote.

That was guaranteed from the moment the Mercedes mechanics pushed Nico Rosberg’s faulty car off the grid while the remaining drivers headed off on their formation lap.

He and team mate Lewis Hamilton could only be separated by thousandths of a second in qualifying and practice, but the latest blow to Mercedes’ reliability ensured the fight would not carry on into the race.

Two gruelling hours later, Hamilton took his seventh win of the year and with it regained the points lead he last held four months ago.

Mercedes discovered the problem on Rosberg’s car as he drove to the grid before the start. As the seconds counted down to the start of the race his mechanics hurriedly completed a change of steering wheel, but they were pessimistic about his chances of getting started.

“Obviously an intermittent fault,” said his race engineer Tony Ross. “If you have control of it, just pull away manually. If you don’t, we’re going to have to start from the pit lane.”

He didn’t. The rest of the field headed for turn one while the Mercedes was wheeled off into the pits.

Hamilton therefore enjoyed an untroubled run to the first corner as the sole occupant of the front row. It also helped that the next closest driver to him got away poorly.

Starts have been a weakness for Daniel Ricciardo this year, and this was no exception. Vettel also didn’t get away very well – his practice start had been compromised by the stationary Rosberg – but did enough to draw alongside his team mate.

Meanwhile Fernando Alonso scorched away from fifth on the grid and was alongside the pair of them as they reached turn one. He braked late, never had a hope of making the corner, and shot across the run-off area. He then rejoined the track in front of both RB10s.

To reduce his chances of incurring a penalty, Alonso ceded position to Vettel. However he chose not to let Ricciardo past, and the stewards quickly announced they would take no action over him cutting the corner. Ricciardo might have had trouble staying ahead of Alonso anyway, as he wasn’t on the Ferrari driver’s pace to begin with. “We weren’t quick enough in the first stint,” he said afterwards. “We had a few other issues going on, with brakes and some power issues that were coming and going.”

The gap between Ricciardo and the cars ahead opened up quickly enough that Red Bull were able to deploy a tactic they previously used in Monza last year. They brought both drivers in for their first pit stop on lap 13, at the same time Alonso came in, and the trio departed in the same order.

Hamilton’s lead was unaffected by his first pit stop, but for his team mate this marked the end of his unhappy race.

Having started from the pit lane, Rosberg had caught the rear of the field despite not being able to use his car’s DRS or power boosts, and lacking fourth and sixth gears. The team prepared to switch steering wheels again when he pitted on lap 15, but stopping and starting in the pits posed further problems.

“You’ll need to stall the car, so come in in first gear,” explained his race engineer. “We’ll drop you off the jacks because the clutch won’t work.” However once his new steering wheel had been fitted Rosberg was unable to select first gear, and they finally had to accept defeat. Hamilton had a seven-second margin and could afford to manage his pace during the second stint. But behind him others were seizing the opportunity to pit early to make up positions. Switching from worn super-softs to fresh ones offered huge gains via the ‘undercut’, as Felipe Massa demonstrated when he made his second stop as soon as lap 23, and jumped ahead of Kimi Raikkonen by doing so.

The other Ferrari used the same trick to its advantage. Indeed Alonso was close enough to Vettel that Red Bull realised he was likely to use the undercut to get ahead, and began adjusting their tactics accordingly.

They were already discussing their options if they switched Vettel to the soft tyres before Alonso made for the pits on lap 25. Vettel told the team he wanted to go down four turns on his front wing – a clear sign he was preparing to switch to the harder tyre.

Sure enough while Alonso blasted through the middle sector in a new best time of 41.829 seconds with the benefit of new tyres on his out-lap, Vettel was 2.3 seconds slower over the same portion of track on his way to the pits. The Ferrari driver easily jumped ahead, but by switching to the soft tyres Vettel had the opportunity to attack him on super-softs in the final stint. Or so it seemed. But on lap 31 Singapore’s inevitable Safety Car period finally happened. Adrian Sutil had given Sergio Perez room on the outside of Memorial Corner as they approach it together, so Perez could be forgiven for expecting the Sauber driver to do the same at the very next corner.

He didn’t, and the contact damaged Perez’s wing which then disintegrated underneath his car as he accelerated towards turn ten. The resulting Safety Car period dragged on for nearly 20 minutes – seven laps – during which time the lapped drivers including Perez were allowed to regain the lead lap.

The Safety Car scotched Alonso’s hopes of pulling out enough of a margin over the Red Bulls on his super-soft tyres to hold them off after his final pit stop. While the track was neutralised he made for the pits and switched to soft tyres.

Ferrari also serviced their other car, dropping Raikkonen behind Valtteri Bottas. Both Williams drivers would now attempt the tall order of running to the end of the race without a further pit stop.

A few laps earlier McLaren had told Jenson Button his two-stop strategy gave him a chance to get ahead of the Williams drivers. After making his second stop under the Safety Car he was running behind them both.

For Hamilton the objective was simple: use his super-soft tyres to drop those on the harder rubber quickly enough that he could make his final pit stop without losing the lead. It proved not to be quite that straightforward, however. When the Safety Car came in it looked like a replay of last year, except this time it was a Mercedes leading a Red Bull instead of the other way around. The gap was the same, however – Hamilton completed his first flying lap 3.2 seconds ahead of Vettel.

He was pushing to build up a 27-second margin to make his final pit stop for the mandatory change in compounds. And with half that margin in his pocket he told the team his tyres felt good and “can do several more laps”.

Soon after that they began to go south. But with Vettel also on trouble on even older tyres Hamilton was still pulling away at over a second per lap, though his complaints grew ever more insistent. These were the same tyres he’d been on when he’d run over the shards of Perez’s front wing.

With Rosberg out of the race, the last thing Hamilton wanted was to blow a shot at winning the race. He knows from bitter experience the cost of running for too long on worn tyres, and it was hard not to invoke comparisons with the 2007 Chinese Grand Prix when he warned his team “there are some lines showing on the outside and the inside of the rear tyres”.

He finally came in on lap 52. It was a clean pit stop, but it wasn’t enough to keep Vettel from taking the lead of the race.

Still there was never any doubt that Hamilton – with a faster car, fresher tyres and the added advantage of DRS – would pass Vettel the first time he tried. Sure enough, he regained the lead on lap 54.

“There was no point fighting Lewis at the end,” said Vettel, “he was on fresh tyres and I had to manage mine to the end as they were pretty old by then”. Vettel’s tyres were two laps older than those of Ricciardo, who was now bearing down on him, with Alonso in close company. But the trio made it to the end without any dramas.

Bottas falters at the last The same could not be said for Bottas, who had told his team during the Safety Car period that his car’s steering felt odd. A train of cars was growing behind him, though on lap 52 his lead challenger – Button – parked up at the side of the road, his car having died just as he was preparing to mount an attack.

Raikkonen took his place, following by Nico Hulkenberg. But they now came under attack from two drivers who had taken on fresh tyres after the Safety Car period: Jean-Eric Vergne and the recovering Perez.

Vergne had fallen foul of the stewards twice and been given five-second penalties on both occasions. He’d served the first in the pits but the last was to be added to his race time, meaning he not only had to pass the cars in front of them but finish well ahead to keep the places.

He did exactly that – he’s already picked off the two Lotus drivers and with three laps to go pounced on Hulkenberg, Raikkonen and Bottas – the latter by now in serious tyre trouble.

“I had a big lock up in the rear tyres when I was defending and after that I had no grip and cars could easily sweep past,” he said.

“I also had an issue with the power steering in the final stint and this made it harder to keep the tyres alive as I lost a lot of feeling in the car. If I hadn’t had this issue then I might have been able to go until the end.”

Raikkonen scrambled past Bottas but also lost out to Perez. Kevin Magnussen, suffering badly with excess heat in his cockpit, also demoted the Williams to claim “the hardest point I’ve ever earned”.

There was no reward for Daniil Kvyat, though. The Toro Rosso driver’s drinks bag failed before the race started and his team were unable to repair it. “I can’t drive any more,” he gasped, and was relieved to be told the race had been cut short by a lap under the two-hour rule. He earned nothing for 14th place, however. Two years earlier in Singapore a failure on Hamilton’s McLaren – caused, Ron Dennis later pointed out, by a Mercedes powertrain component – set in motion the sequence of events which led to him joining the team.

Today another timely technical failure, for his team mate, has given his championship campaign a shot in the arm.

It went a significant way towards rebalancing the effect of Mercedes’ many car failures which have tended to cost Hamilton more than Rosberg this year. Singapore may not have served up a classic race, but it’s left the two main contenders on an almost equal footing with just five rounds remaining.

36 comments on “Hamilton back on top after another Mercedes failure”