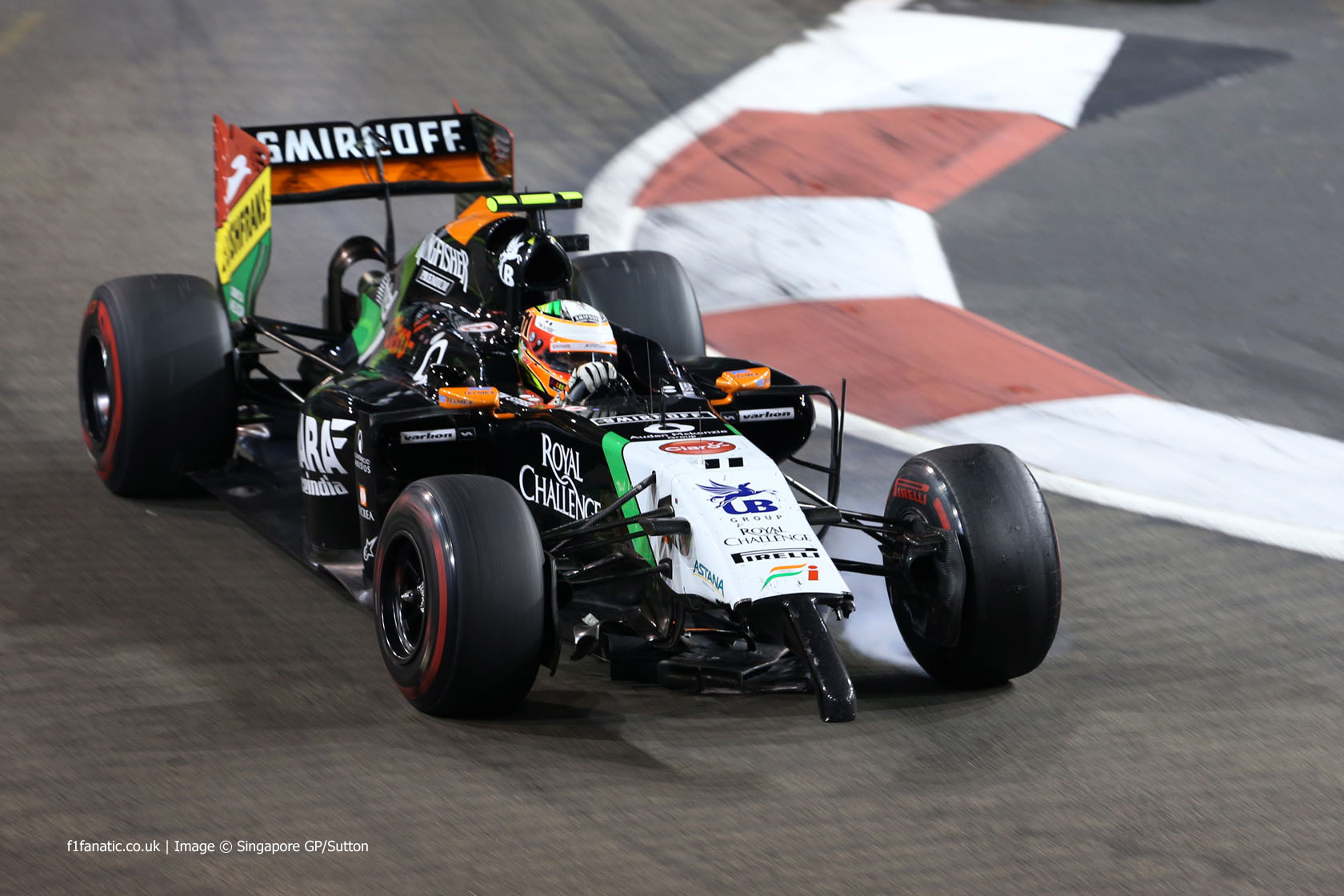 [interactivecharts]
Sergio Perez claimed a useful seventh place in the Singapore Grand Prix, but ironically he probably wouldn’t have been in a position to do so had he not collided with Adrian Sutil earlier in the race.

Perez was running 16th and had just made his second pit stop when he tangled with the Sauber driver at turn eight. The contact broke his front wing, but while Perez headed back to the pits for a replacement the Safety Car was deployed so the debris could be cleared.

This was a gift for Perez as the incident had left him a lap down. When the lapped drivers were allowed to rejoin the lead lap he found himself back in the hunt for points and on fresh tyres.

He made little progress once the race resumed but with 16 laps to go Force India decided to switch him onto the super-soft tyre to give him the chance to benefit from any drivers who ran into trouble nursing their soft compounds to the end.

That’s exactly how it played out: Valtteri Bottas held up a queue including Kimi Raikkonen, Kevin Magnussen and Nico Hulkenberg – and Perez passed the lot of them within the final two laps.

“Those in front of me at the end had big tyre degradation, but this affected me as well,” he said. “When I caught the train ahead I didn’t have much grip either and this made each one of the overtakes a bit more difficult. We managed our tyres perfectly and to go from P15 to P7 was the reward we deserved.”

Deserved it may have been, but it’s doubtful it would have happened at all had he not collided with Sutil.

Another driver Perez might have come up against in his late-race charge was Jenson Button. The McLaren driver was poised to strike at Bottas when his car failed.

“I was cueing things up for the end of the grand prix,” said Button. “I’d been looking after the tyres for the whole stint, and I knew the last five laps were when things were going to get tricky for Valtteri ahead of me.”

“I’d just switched the car into a different mode, and the chase was starting to get quite exciting. Then, a few corners later, the car just died going into the hairpin. Going across the bridge, it just turned off, so I had to stop.”