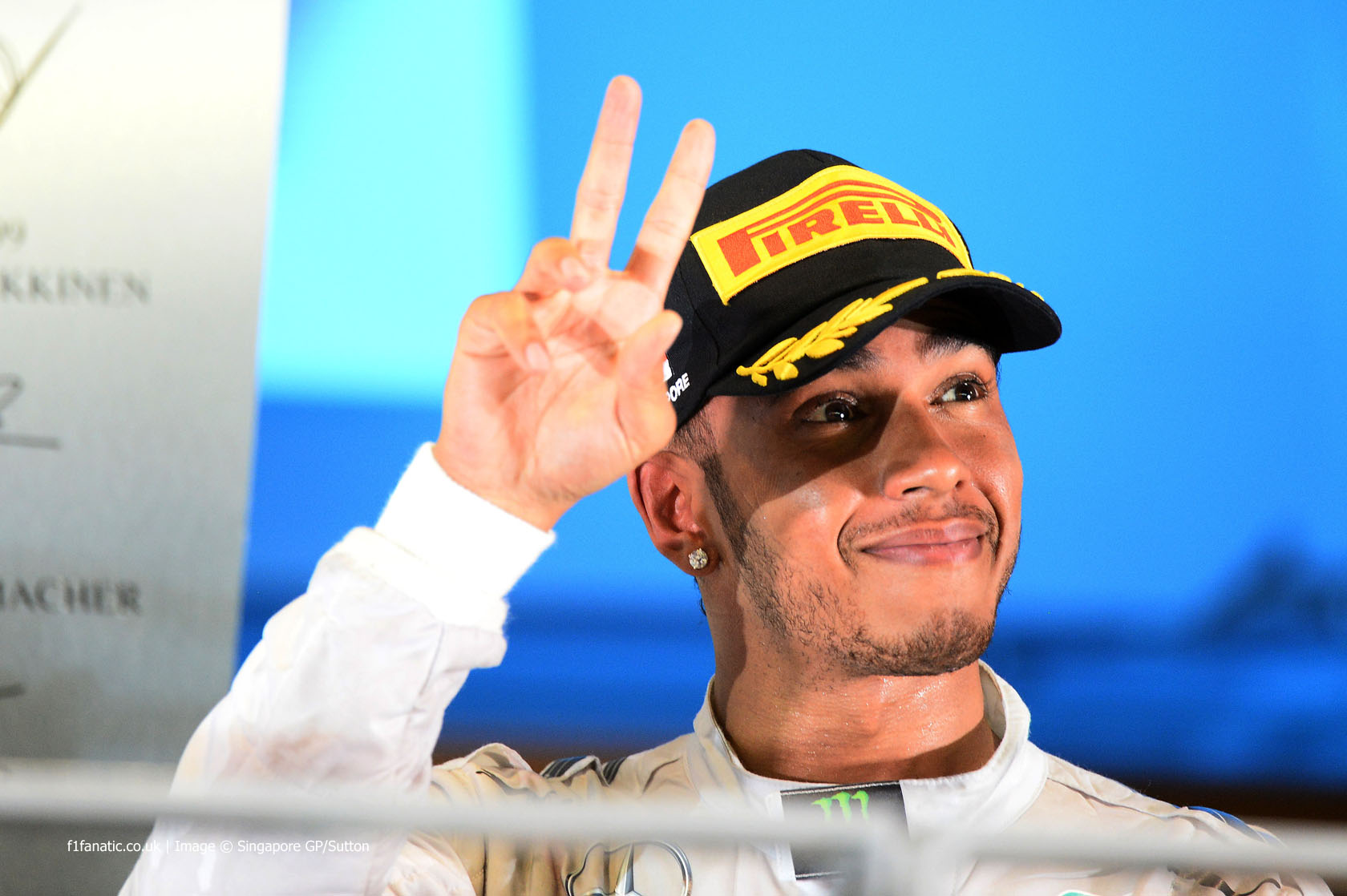 Lewis Hamilton is in the lead of the drivers’ championship for only the second time this year after winning the Singapore Grand Prix.

Hamilton’s seventh win of the season means he has now won half of the races so far this year. It was his second victory in Singapore, where he last triumphed for McLaren in 2009.

For the third time this year Hamilton won from pole position and set fastest lap on the way. That was his fifth career ‘hat trick’, giving him as many as Fernando Alonso and three fewer than Sebastian Vettel. The record is held by Michael Schumacher, who has 22.

It’s been a year for close pole position battles. In Malaysia, Monaco, Canada and Austria the front row was decided by less than a tenth of a second. It happened again in Singapore, where Hamilton edged Rosberg by just seven-thousandths of a second. You have to go back to the 2010 German Grand Prix to find a closer fight for first place than that – Vettel pipped Alonso by two-thousandths on that day.

The only thing that kept Hamilton from a ‘grand slam’ was the two Red Bull drivers, who each led one lap of the race. In Vettel’s case, it was the first time he’d led a race all season, making him the ninth driver to do so.

Singapore continues to be one of Vettel’s strongest venues. This was his fifth consecutive finish in the top two, and he has placed in the top five in all seven editions of the race. Alonso can top that, however – he’s finished in the top four in every Singapore Grand Prix, though this was a streak which began in dubious circumstances.

Aided by a lengthy Safety Car period, the Singapore Grand Prix once again hit the two-hour time limit and also had to be shortened by a lap. This is consistently one of the longest races of the year.

Jean-Eric Vergne equalled the best result of his career so far with sixth place, which he also scored in last year’s Canadian Grand Prix.

Behind him Sergio Perez took seventh for Force India and Nico Hulkenberg backed him up in ninth. The team now have 117 points, beating their previous best of 109 which they scored two years ago.

This is partly thanks to their strong finishing rate. They are the only team who are yet to see either of their drivers fail to be classified as finishers due to a technical problem.

Having taken a three-point lead in Singapore Hamilton’s chances of winning the championship has risen enormously. Assuming Mercedes deliver on their potential to take one-two finishes in all the remaining races, Hamilton now has a 62.5% of claiming the title – a figure which was less than 10% before the weekend began.

Have you spotted any other revealing stats and facts from the Singapore Grand Prix? Share them in the comments.