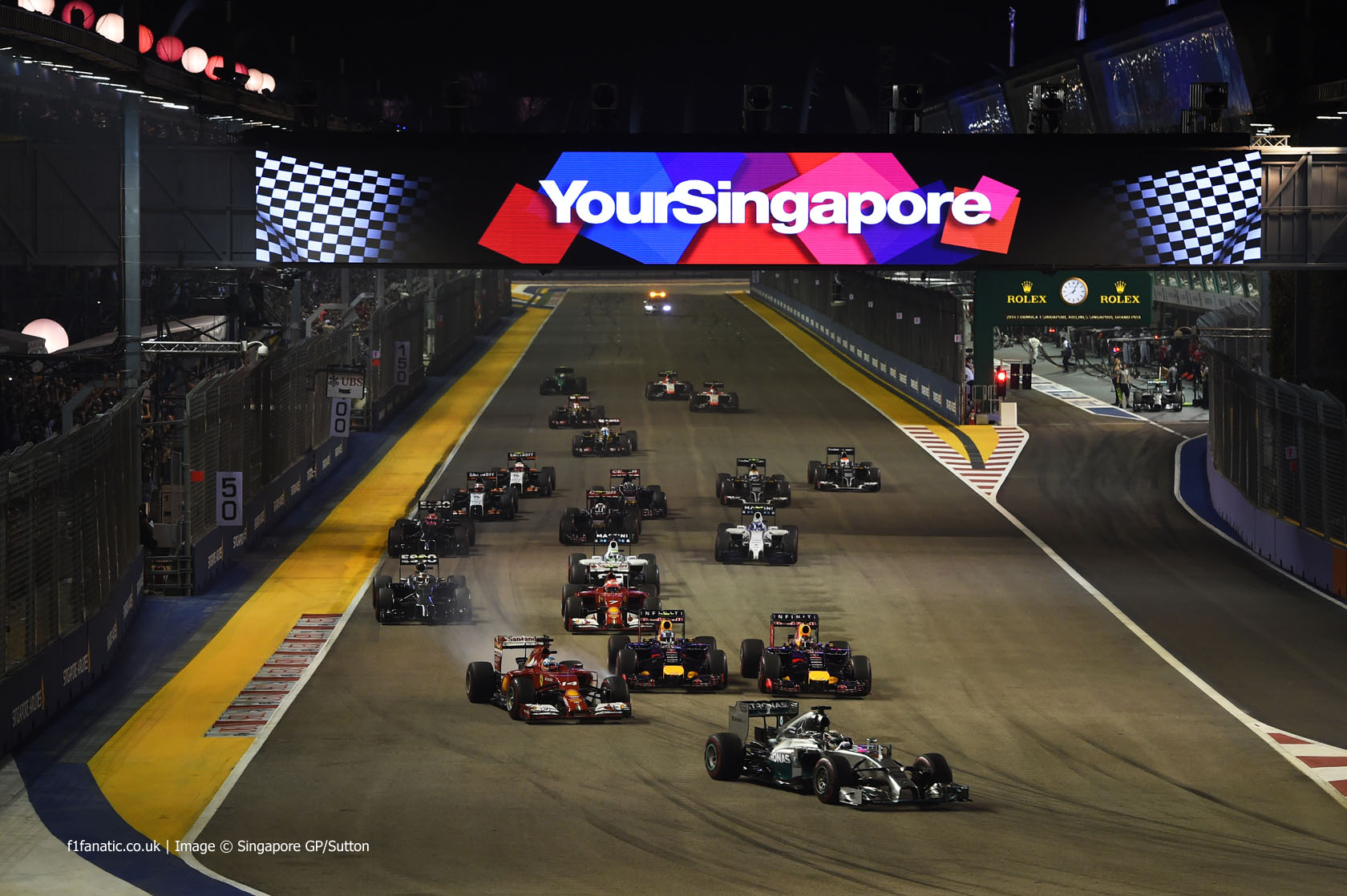 Which F1 driver was the best performer during the Singapore Grand Prix weekend? Sebastian Vettel – Having lost most of the second practice session on Saturday due to a power unit problem, Vettel took fourth in qualifying but said he believed his car was quick enough for pole position. Passed Ricciardo at the start, but when Alonso got within range during the second stint the team elected to switch him onto the harder tyres. This paid off when the Safety Car came out, moving Vettel back up to second. He then coped with a 35-lap long stint on the softs to secure his best result of the season.

Daniel Ricciardo – Out-qualified Vettel but made a sluggish start and was passed by his team mate and Alonso, though the latter went off the track to do it. Slowed by an intermittent fault early in the race, he wasn’t able to get ahead of Alonso until the Ferrari driver was dropped behind him when the Safety Car came out.

Nico Rosberg – There was almost nothing to choose between Rosberg and Hamilton during practice and qualifying, so for those hoping for a close race it was particularly galling to see him being pushed off the grid. Managed a few laps with an ailing car but couldn’t get his car going after his first pit stop, despite urging his team to try everything they could think of.

Lewis Hamilton – Pipped Rosberg to pole and was largely untroubled after his team mate retired. But the Safety Car left him needing to pull out a significant gap over his closest pursuers, which he didn’t quite achieve, although he was easily able to pass Vettel once he’d rejoined the track and take a vital win. Fernando Alonso – Having looked good in practice fifth on the grid was almost a disappointment, though there was much encouragement to be had from the reduced gap to Mercedes. He cut turn one at the start to pass both Red Bulls, and was fortunate the stewards were content with him only letting one of them past. He used an aggressive strategy to get ahead of Vettel, but fell back behind both of them because of the Safety Car. Without that it would have been fascinating to see if he could have kept them behind in the final stint.

Kimi Raikkonen – Said he was “very happy” with his car’s balance after qualifying, although a problem relating to his car’s software forced him to scrap his final run in Q3. Having overtaken Massa at the start he was disappointed to drop behind the Williams at the second round of pit stops, then lost out to the other one under the Safety Car. He later regained the place from Bottas but not before Vergne and Perez also passed him.

Romain Grosjean – Fumed at the shortcomings of his Renault engine after qualifying 16th. He was up to 13th when the Safety Car came in but lost two places at the restart, and with it a chance of scoring points. “I tried to attack too hard on the restart. I wanted to give it everything and with cold soft tyres after a slow safety car period, it was just too much once at the corner.”

Pastor Maldonado – After a crash in practice he was eliminated in Q1, but his race went race better – Grosjean’s mistake allowed him to finish in front of his team mate. Jenson Button – Missed out on a place in Q3 by a slim margin, but made a great start and moved up four places. McLaren felt his two-stop strategy would allow him to attack the Williams drivers, but after the Safety Car period his car failed and wrecked his hopes of a strong points score.

Kevin Magnussen – Beat Button again in qualifying, but dropped behind him after a scruffy first lap. Despite intolerable hear in his car’s cockpit he came home in tenth for a point.

Nico Hulkenberg – Reasserted himself over Perez in qualifying, though neither of the Force Indias made it into the top ten. Unlike his team mate he did not pit for fresher tyres in the final stint, and so Perez came by him while Hulkenberg claimed ninth.

Sergio Perez – Was having a quiet race until he tangled with Sutil, which happened to work out very well for him. He regained the lap he had lost during the resulting Safety Car period, and as he had fallen towards the back of the queue Force India could afford to gamble on switching him to super-soft tyres late in the race. He put them to good use, rising to seventh at the flag.

Adrian Sutil – Wasn’t able to use full power in qualifying and was knocked out in Q1. In the race he tangled with Perez, picked up a penalty for exceeding track limits, and then retired. Esteban Gutierrez – Continued to bemoan the Sauber’s lamentable reliability after failures ended both drivers’ races. “At the moment it is almost impossible to achieve good results,” he said.

Jean-Eric Vergne – Just six-hundredths off Kvyat’s pace in qualifying – which made the difference in the contest to reach Q3. His team mate made way for him early in the race, but it was in the closing stages when Vergne really came to life, switching to super-softs and passing the likes of Hulkenberg, Raikkonen and Bottas. He picked up two five-second penalties along the way, but built up enough of a gap over his pursuers that he was able to keep his sixth-place finish.

Daniil Kvyat – Had the one problem no driver wants in Singapore – his drinks bag failed before the start and the team were unable to fix it. Was told to let Vergne past early in the race, and thereafter suffered in the punishing heat with no water. “I’m dying here” he told his team with 16 laps to go – but he made it to the end. Felipe Massa – Out-qualified Bottas and despite falling behind Raikkonen at the start an early second pit stop got him ahead of the Ferrari. He then ran the longest stint of any driver at the end of the race – 38 laps – to take fifth place.

Valtteri Bottas – Couldn’t make his tyres last as well as Massa at the end of the race, although did have a deteriorating steering problem. His tyres finally gave up on the final lap and dropped him from seventh place out of the points.

Jules Bianchi – Was a second ahead of his team mate and the Caterhams in qualifying, and just four-tenths off Maldonado. But a brake problem blunted his run at the end of the race and left him unable to pass Ericsson.

Max Chilton – It’s rare that a Marussia driver can legitimately claim to have been held up by a Mercedes but Chilton was in the opening laps in Singapore. More misfortune came his way in the form of a puncture, and he ended the race a distant 44 seconds behind his team mate.

Kamui Kobayashi – Beat Ericsson in qualifying as usual but an electrical problem on the formation lap meant he didn’t even get to start the race.

Marcus Ericsson – Described his race as “one of the best of my season so far” after staying on the harder tyres at the end of the race and holding off Bianchi.

Who was the best driver of the 2014 Singapore Grand Prix weekend?