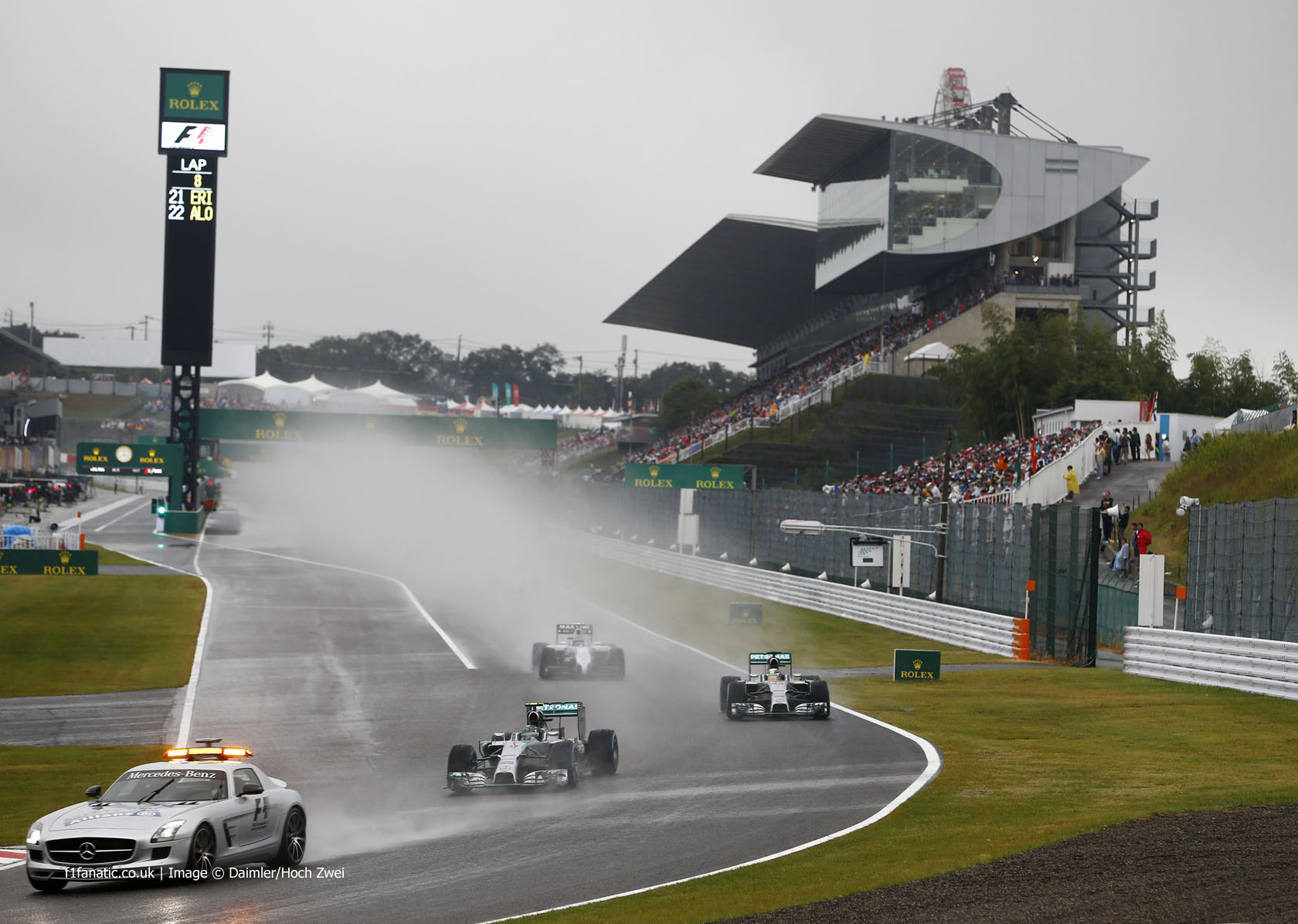 The race was abandoned with six laps remaining following a serious accident involving Jules Bianchi and Adrian Sutil at the Dunlop Curve. Sutil escaped unhurt in the accident, but Bianchi received emergency medical attention at the scene.

With rain falling heavily before the start, the decision was taken to begin the race under Safety Car conditions. On the second lap the red flag was shown and the cars brought into the pit lane for around 25 minutes to wait for conditions to clear.

The race resumed under Safety Car conditions once again, but within two laps Fernando Alonso became the first retirement of the race when his Ferrari suddenly lost power in the Esses with an apparent electrical failure.

With some drivers calling for the race to begin on team radio, the Safety Car finally pulled into the pits on lap ten with Nico Rosberg leading from Hamilton and Bottas. Jenson Button immediately pitted for intermediates in a clear bid to emulate some of his memorable wet weather performances of previous seasons.

After just a few laps of green flag racing, there was a rush of activity in the pit lane as the field began to switch to intermediate tyres. After every car had cycled through, Rosberg retained the lead, with Hamilton close behind and Button having jumped to third after his early gamble.

The two championship rivals were clear out in front and Hamilton began to put his team mate under immense pressure for the lead of the race. With DRS enabled on lap 25, Hamilton had a great opportunity to attempt a pass and managed to pull alongside Rosberg along the start/finish straight on lap 29, sweeping through into the lead around the outside of turn one.

With many cars sticking to intermediates, the rain slower began to fall harder and around lap 40, many drivers opted to switch for full wet tyres to try and tackle the increasingly difficult conditions.

Having battled with the Williams earlier in the race, the Red Bull duo of Sebastian Vettel and Daniel Ricciardo eventually caught Button’s McLaren in third, dispatching him with a pair of decisive moves.

With the surface water levels increasing, Sutil lost control of his Sauber at the Dunlop Curve and crashed into the outside tyre barriers. The crash scene was covered only by local yellows and – unseen by cameras – Bianchi’s Marussia appeared to aquaplane off the circuit at the same point the following lap.

The Safety Car was deployed with the Medical Car also immediately dispatched. Many drivers took the opportunity to pit for fresh tyres, with a mix of drivers opting for both Intermediates and full Wets.

After two laps under the Safety Car, the race was red flagged for the second time. With all cars brought back into the pits once again, the FIA soon announced that the race would not be restarted, officially declaring the results from the end of lap 44, the first lap under Safety Car. Full race points were awarded.

Hamilton was therefore declared the winner, from Rosberg in second and Vettel in third. Ricciardo was classified fourth, followed by Button and the Williams pair.

Despite stopping on the start/finish straight under Safety Car conditions, Nico Hulkenberg was awarded eighth, with Jean-Eric Vergne in ninth and Sergio Perez rounding out the points finishers in tenth.