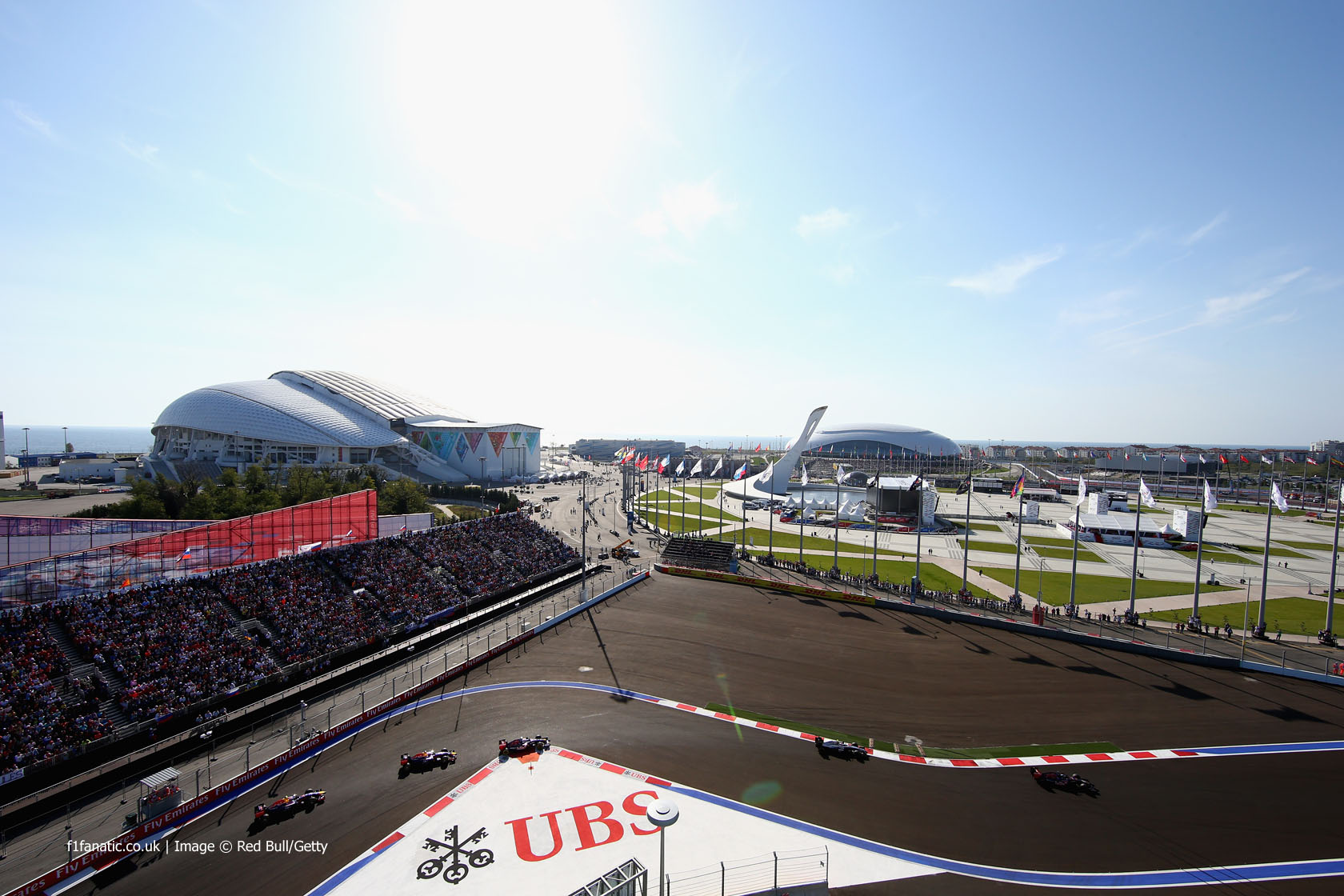 Coming so soon after the harrowing events of Suzuka, Russia’s first Grand Prix was always going to be an emotionally charged event.

While 21 cars assembled on the grid the 22nd, belonging to Jules Bianchi, sat in the Marussia garage, waiting for the driver whose recovery from injury remains the dearest hope of the entire F1 community.

Before the race began, the drivers assembled in silence as a mark of respect for him. If motor racing can serve any useful purpose in such difficult times like these, it is as an entertaining distraction. And for the first few laps it seemed the Russian Grand Prix might just do it.

The Mercedes drivers led away from their customary front-row positions, and as they reached the first braking zone Nico Rosberg seized his best chance to stop his team mate from winning a fourth consecutive race.

Rosberg aimed for the inside of the corner and tried to out-brake F1’s latest of late-brakers. “It was definitely do-able,” he said afterwards, “I just messed up – just braked too late and too hard.”

This was no exaggeration. The Mercedes smoked its front tyres spectacularly and Rosberg made for a run-off area which had been well-used by drivers in the support races.

He rejoined ahead of Hamilton, and his engineer was quick to point out he would not be allowed to keep that advantage. But Rosberg had bigger problems. “I have to box because of vibrations,” he said, and sure enough he ended the first lap in the pits having his flat-spotted softs replaced with a set of mediums.

The Toro Rossos fall back Valtteri Bottas took up second behind Hamilton, followed by Jenson Button and Fernando Alonso, the latter having made another excellent start.

But Jean-Eric Vergne’s had been even better, fending off attacks from Sebastian Vettel and Kevin Magnussen, the latter taking to the Sochi Autodrom’s generous complement of run-off areas more than once as he tried to get ahead.

From a crowd-pleasing fifth on the grid, Daniil Kvyat was shuffled back to eighth, after which Daniel Ricciardo knocked him down another spot. Both Toro Rosso drivers were struggling to recapture their qualifying pace, and despite Vergne’s best efforts he was soon passed by Magnussen and then the two Red Bulls.

But Vergne drew the line at being passed by his team mate, and as the pair went toe-to-toe at turn one it allowed Kimi Raikkonen to capitalise and take a place off Kvyat. And that was it. Once the field settled into an order it remained largely undisrupted. Rosberg patiently picked off the slower cars and once he reached the midfield those in front of him – like the two Force India drivers – were advised not to waste their time trying to resist a car which was inevitably going to get past one way or another.

Like Valencia before it, the Sochi Autodrom has all the disadvantages of a street circuit and none of the benefits. Turn three aside, the layout is largely composed of uninteresting and repetitive slow corners. But its pristine surface is largely devoid of the bumps, gradient and camber that make true street courses challenging.

It didn’t help matters that the stop-start layout proved highly demanding in terms of fuel consumption, yet the smooth asphalt asked little of Pirelli’s somewhat conservative tyre selection. For many drivers this was a case of ‘list and coast’ driving either side of a single pit stop.

Rosberg’s first-lap mishap and Massa’s misfortune in qualifying served to further diminish the competition at the front. Massa tried to follow Rosberg’s path through the field, but doing so on soft tyres without the assistance of the Safety Car proved too much to ask. A second pit stop ensured he finished the day out of the points. Rosberg, meanwhile, was elevated to third place when the remaining drivers made their pit stops, and took second place off Bottas as the Williams driver struggled to get his medium compound tyres up to temperature.

Though some of Rosberg’s rivals – such as Button – doubted he could make a single set of mediums last for all bar one of the race’s 53 laps, by managing his pace he made it to the end without reaching the dreaded ‘cliff’. Although Bottas set the fastest lap of the race as he gave chase, Rosberg set his own fastest time on the penultimate tour.

Alonso’s single pit stop appeared to be one too many for his pit crew, who fumbled his front-left tyre change, then further delayed their driver when a mechanic inexplicably stepped in his path with a jack. That ensured he finished behind the McLarens.

When confronted with questions about the ethics or politics of racing in certain countries – be they Bahrain, Russia or wherever – Formula One team representatives have dutifully stuck to the same ‘F1 doesn’t do politics line’ which Bernie Ecclestone and Jean Todt fall back on.

The idea that a sport with Formula One’s global reach, where the majority of rounds area subsidised to some extent by national or local governments, can exist in a political vacuum, is patently absurd. It is cynicism with a facade of naivety, and during FOM’s coverage of the Russian Grand Prix the mask slipped.

You couldn’t complain that the television director cut away from a thrilling moment of racing action during the Russian Grand Prix – because there were none – yet the switch of focus from sport to politics when Vladimir Putin arrived could not have been less subtle.

The repeated shots of Russia’s controversial president left no one in doubt who the Russian Grand Prix was for the benefit of. This was personality cult propaganda.

The race petered out to an anticlimax long before the chequered flag brought proceedings to a close. Hamilton’s ninth win of the season ensured he will end the season with more wins than anyone else, but his championship situation is a long way from being secure.

“I remember 2007 very well,” said Hamilton when reminded of how the title slipped through his fingers during his rookie season, and asked if he was afraid the same might happen again.

“I wasn’t afraid then either but I guess I was perhaps less experienced,” he said. “I’m a completely different man today so I’m looking forward to the races coming up.” The drivers’ title may be far from settled, but the constructors’ championship has been decided. Mercedes’ W05 has been the class of the season all year long, and only occasional reliability problems kept them from clinching the title sooner.

Amid the sheer tedium of the race and the depressing cynicism of the politics, Mercedes had the class to put the focus back where it belonged. The constructors’ championship marked the culmination of five years’ work since they took over the Brawn team, but even in their moment of triumph they acknowledged it was tinged with sadness.

“This is a great moment for our team but, first of all, we must not forget what happened last week,” said the team’s motorsport director Toto Wolff.

124 comments on “Sport and politics collide amid dreary Russian race”