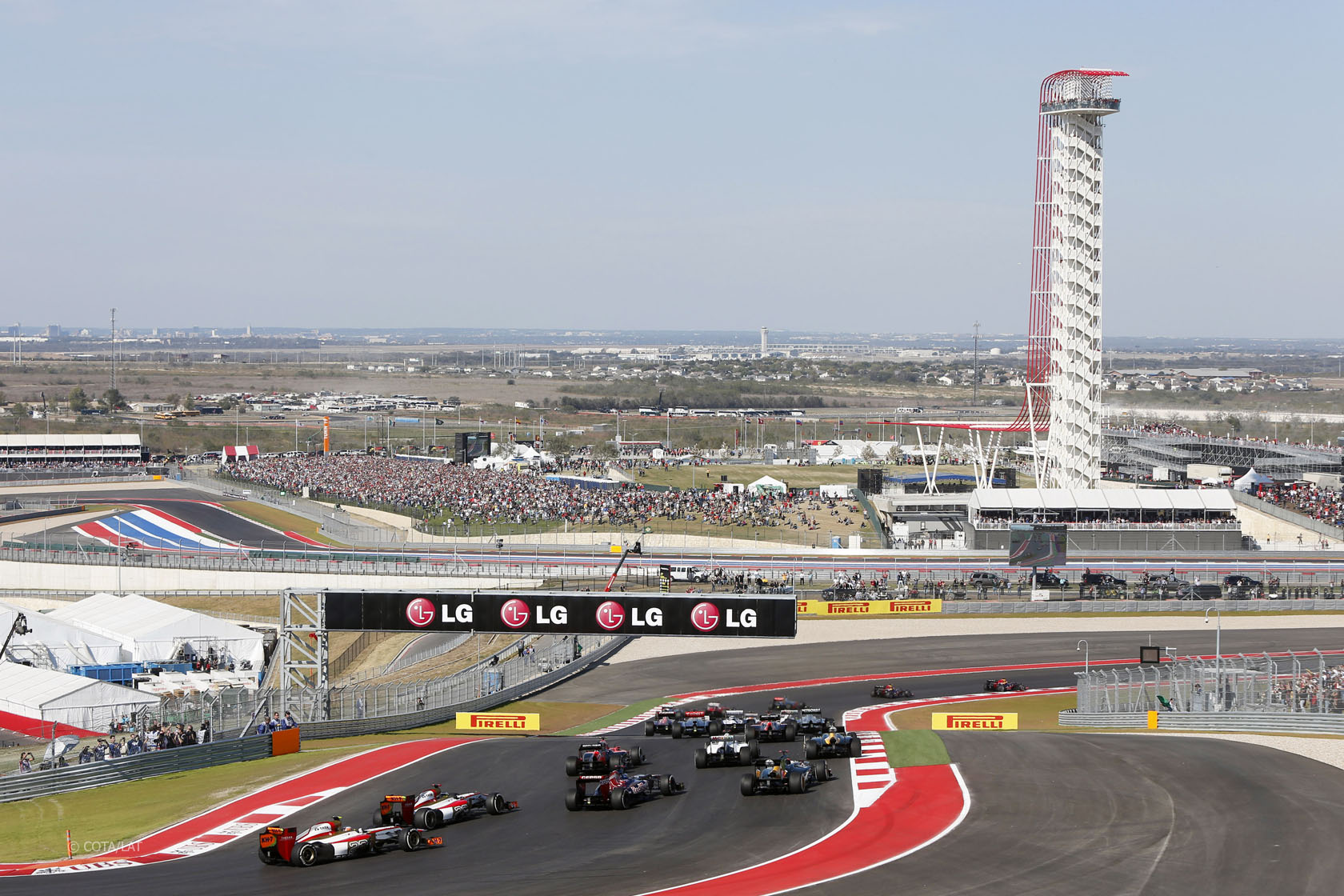 With three races and a maximum of 100 points remaining to decide this year’s Formula One drivers’ championship, the focus during this weekend’s United States Grand Prix should have been entirely on the racing.

But instead, F1 arrives in Austin as a sport on the brink of crisis with two teams – Caterham and Marussia – having fallen into administration since the last race, leaving a meagre field of 18 entrants for this weekend’s grand prix.

Given F1’s eagerness to conquer the American market in a state which prides itself on having the largest of everything, it’s an unfortunate coincidence this year’s race will have the smallest grid since the infamous 2005 United States Grand Prix at Indianapolis. Three years since F1’s last race at the Circuit of the Americas, the field is now 25% smaller.

Although Marussia and Caterham were only ever going to be contesting the minor positions, the loss of these four cars will have a significant impact on this grand prix weekend. The regulations do not cover the potential for just 18 cars in qualifying, but we will likely see a reduction to the number of cars eliminated from the first two qualifying stages to accommodate the reduced number of cars.

Marussia’ inability to race in the USA means local fans will miss the opportunity to see Alexander Rossi in action, as was widely expected to happen. And the sport’s profile in America would certainly have benefitted from having a local driver.

But while this will be a race weekend dominated by politics, the thousands of fans that will flock to the Circuit of the Americas for its third grand prix will no doubt be more concerned about the duel for the drivers’ championship.

Lewis Hamilton arrives at Austin with a 17-point advantage over Nico Rosberg, and seeking a fifth successive victory to further extend his lead. However Hamilton cannot secure the title this weekend.

He was the first driver to win at the Circuit of the Americas when it opened in 2012. Designed as a purpose-built, permanent home for Formula One in the United States, the venue has proved by far the most popular recent addition to the calendar among drivers, teams and fans. Taking inspiration from a variety of famous European circuits, COTA provides a variety of challenges around its three distinct sectors.

Circuit of the Americas circuit information

Circuit of the Americas track data in full

The wide, uphill braking zone into the first corner invites drivers into daredevil lunges before the high-speed sweepers test both driver precision and aerodynamic efficiency. The long back straight offers a second prime overtaking area, with the final sector proving to be perhaps the most difficult for drivers to master during the sport’s first two visits.

A high average lap speed means Mercedes-powered cars will likely enjoy an advantage this weekend. Following criticism that previous tyre choices for this race were too conservative, Pirelli have responded by nominating the soft and medium compounds for this weekend.

With the sport still reeling from the horrific accident suffered by Jules Bianchi in Suzuka, F1 will also trial a new yellow flag speed limit system during free practice this weekend, designed to increase driver and marshal safety after an accident. If successful, we could well see the system introduced during races next season.

Daniel Ricciardo may not be giving up on his championship hopes for this season, but it’s likely that the Australian will be duly eliminated from title contention after this weekend’s race – barring any dramatic upset.

There’s little chance of Sebastian Vettel emulating last season’s COTA victory this weekend as the reigning champion is expected to use a new complete power unit, which will force him to start from the pit lane, and therefore leave him with no incentive to participate in qualifying. Expect just 17 cars on the grid in Q1. For the new constructors’ champions the remaining three races of the season are all about determining which of the two Mercedes drivers will claim the Drivers’ title.

On the back of his second four-race winning streak of the season, Hamilton knows that he has a decisive edge over his rival at this crucial stage of the championship. But he will equally be aware that that alone will not guarantee him the title and that any more mechanical misfortunes could well prove to be disastrous to his campaign.

Having thrown away any chance of victory at the first braking zone in Russia, Rosberg must keep his cool and begin taking significant points away from his team mate if he is the one to take this championship. Crucially, if Rosberg leaves Austin with a points deficit of 24 points or less to Hamilton, then the title can only be decided at the double points finale in Abu Dhabi.

It’s still yet to be officially confirmed but it seems increasingly likely these final three are Fernando Alonso’s last for Ferrari.

Having been beaten by both McLarens in Russia, Ferrari increasingly seem doomed to their first win-less season since 1993. But according to engineering director Pat Fry, they have been working hard to improve performance since Sochi.

“The extra week has given us more time to get ready and also to prepare some specific test items,” he said. “They are all aimed at learning about car performance and trying to improve, but at this stage of the year, it’s more with an eye to 2015.” We may soon have a better understanding of where Romain Grosjean will be racing in 2015, with the Frenchman having told his fans to expect ‘big news’ about his future this weekend.

Despite failing to score any points since Monaco, the team’s morale will likely have been boosted by securing Mercedes engines for next season. But given the high speed nature of the Austin circuit, it may prove difficult for Lotus to add to their points tally this weekend.

Having been locked in a battle with Force India over fifth place in the constructors’ championship, McLaren achieved their best result since Melbourne in Russia to put them firmly ahead of the Silverstone team.

Racing Director Eric Boullier is confident that McLaren’s late-season surge will continue in Austin. “Our result in Sochi gave us increased confidence, and we come to Austin with the firm intention of building on this recent form with a strong finish for the team and boosting our points buffer over Force India in the constructors’ standings,” he says.

Sochi proved a big blow to Force India’s hopes of snatching fifth place from McLaren by the end of the season with neither Sergio Perez or Nico Hulkenberg looking particularly quick.

Hulkenberg has announced that he will be committing to the Silverstone team for next season. But Perez has out-qualified and out-raced by his team mate in four of the last five races. While next year Perez will have a true home race, the Texas round has served as a surrogate home event for him, with Mexican fans turning out in force to cheer him on.

It is likely to be between Sauber and Lotus for who has the indignity of bringing up the rear of the 18-car field at the Circuit of the Americas.

But despite the loss of of two backmarking teams, the likelihood of Sauber finally capturing those elusive first points of the season will not increase. With the team admitting that they are no longer bringing upgrades to the C33, Sauber will be relying on good fortune to help them achieve their first top ten finish since last year’s Brazilian Grand Prix. Despite being overlooked for promotion to Red Bull Racing for 2015, Jean-Eric Vergne continues to do all he can to try and secure his Formula One future. He has beaten his Red Bull-bound team mate in three consecutive races, which is the kind of performance he needs if he is to convince Toro Rosso that an all-rookie line-up next year is not the way to go.

Following his successful first outing for the team in practice at Suzuka, Max Verstappen will make his second appearance in an official grand prix session in Austin on Friday.

Yet another impressive performance from Valtteri Bottas in Russia saw him secure his fifth podium of the season and almost snatch pole position from the Mercedes.

With COTA’s long straights and high speed turns, Williams will likely be feeling confident of challenging for yet another podium in Austin – a venue where Bottas scored the best result of his debut season 12 months ago.

After his Russian race was severely compromised by a fuel pressure problem in qualifying, Felipe Massa will be determined to bounce back as Williams inch ever closer to their best finishing position in a season for over ten years.

Are you going to the United States Grand Prix?

If you’re heading to USA for this weekend’s race, we want to hear from you.

Who do you think will be the team to beat in the United States Grand Prix? Have your say below.

60 comments on “Everything’s bigger in Texas, except F1’s meagre field”