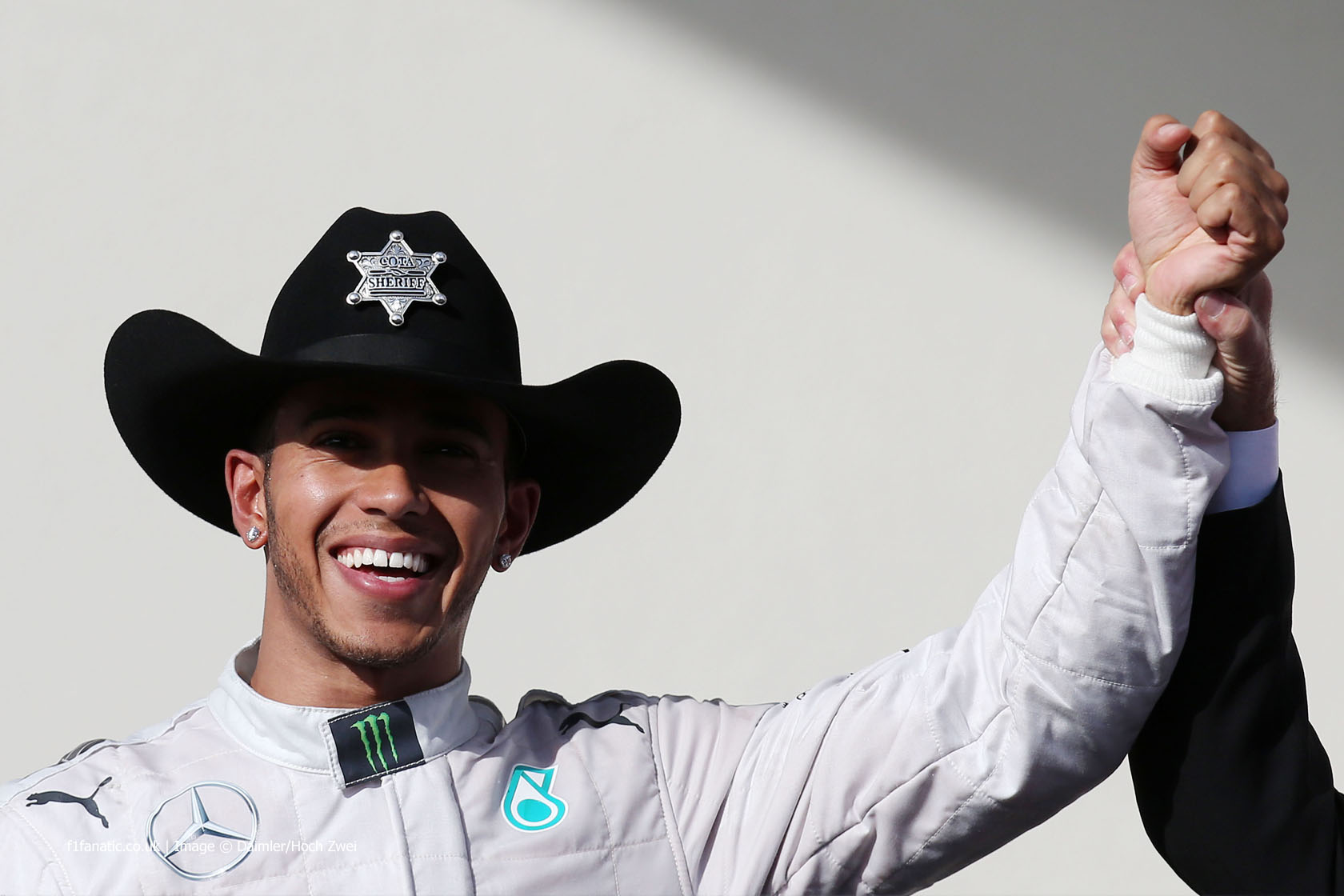 For the second time in three races, Lewis Hamilton lined up behind his team mate on the front row of the grid but showed him the way home at the chequered flag.

Nico Rosberg made Hamilton work hard for this one – he took pole position in style on Saturday, and early in the United States Grand Prix he seemed to have enough pace to keep his team mate at sword’s length indefinitely.

But when Hamilton got within range on the 24th lap he forced Rosberg to relinquish his grasp on victory – and took another important step towards the championship. Once the grid was cleared of people F1’s 18-car field looked noticeably thin. Of course it didn’t help matters that Sebastian Vettel had to start from the pits, or that two cars were eliminated within moments of the start.

But unlike in Russia the race was a lively affair, aided by a more aggressive tyre selection from Pirelli and improved grip levels at the Circuit of the Americas. The latter seemed to diminish the effect of starting on the dirty side of the grid, which had been severe in the previous two races.

Hamilton wasn’t able to put Rosberg under serious pressure at the first corner, but behind them Felipe Massa got away well enough from fourth on the grid to beat team mate Valtteri Bottas to turn one.

Daniel Ricciardo lost two places off the line, falling to seventh ahead of Kimi Raikkonen. The Ferrari driver had trouble of another kind on the first lap, when he was assaulted by Sergio Perez.

The Force India driver had made an over-ambitious attempt to pass Adrian Sutil, which resulted only in both drivers being eliminated from contention and Raikkonen taking damage. Perez was later handed a stiff penalty for eliminating Sutil, an act which shattered Sauber’s hopes of finally getting some points on the board following their best-ever qualifying performance. The Safety Car was summoned and McLaren sprang into action, bringing both drivers in to switch them from soft to medium tyres. Red Bull also pulled a fast one, bringing Vettel in for soft tyres and then summoning him back on the next lap to re-fit the medium compounds. This meant they had fulfilled their obligation under the rules to run the soft tyre – potentially a strategic advantage.

When the race resumed Rosberg led Hamilton and the Williams pair – followed by Ricciardo. The Red Bull driver had picked up one place from Kevin Magnussen, then brilliantly dispossessed Fernando Alonso for fifth at the restart.

Towards the end of the first stint Ricciardo turned up the heat on Bottas. He was within a second by lap 12, and two laps later he made an early dive for the pits. To preserve the order of their drivers Williams had to bring Massa in first the next time by, and when Bottas arrived on the next lap he slipped behind Ricciardo.

Alonso emerged from his first pit stop ahead of Vettel – who was unhappy with his car’s balance – and behind the out-of-sync McLarens. The Ferrari driver battled thrillingly with Button and eventually came out ahead, then went on to pass Magnussen too.

By then the Mercedes pair had made their first pit stops, both switching to the medium tyres. Rosberg’s lead peaked at 2.6 seconds before he pitted, but once on the harder tyres Hamilton had a decisive advantage of a few tenths of a second.

Within two laps of getting close enough to Rosberg to be able to use his DRS, Hamilton was through. Rosberg saw the move coming too late to be able to cover the inside of turn 12. As they accelerated away it was close – almost Spa-close – but the pair left each other just enough room.

At first Hamilton only edged away, then he built his lead back up to over two seconds. But even in the final stint Rosberg never fell far behind, and as Hamilton caught traffic in the closing stages Rosberg prowled menacingly in the background.

Back in 2012, with six more cars on the grid, Hamilton exploited such an opportunity presented by a lapped car, but Rosberg had far fewer such chances this time.

Another gamble pays off for Vettel

While the battle settled down at the front, the contest behind them was heating up. A sluggish pit stop cost Massa third place to Ricciardo. Red Bull were doing well for pit stop practice – Vettel was serviced four times on his way to seventh.

His last stop with eight laps to go looked like a blunder by Red Bull as it dropped him well out of the points. It proved a masterstroke as Vettel swept past all the cars he had fallen behind thanks to his fresher tyres – and might have beaten Alonso to sixth place with one more lap.

Behind Magnussen in eighth was Pastor Maldonado, who scored his first points of the season. Team mate Grosjean had been running even higher before being elbowed off at turn one by Jean-Eric Vergne. The Toro Rosso driver was later penalised for the move, and was passed by Maldonado on the final lap, the Lotus driver also taking a five-second penalty for a pit lane speeding violation.

Hamilton has title in sight The curious fact of Hamilton’s tenth victory of the season was how little it did for his title chances. Hamilton has now won ten races to Rosberg’s four, yet his lead in the championship is less than the number of points earned for an ordinary win.

With twice as many points available for the last race of the season, the drivers’ championship will now definitely be decided in Abu Dhabi. Hamilton’s fifth win in a row inevitably prompts claims he has the ‘momentum’ and the ‘psychological advantage’, but all that truly matters is where the cars finish, and that isn’t always just a question of how well the driver performs.

Rosberg went into the weekend saying it was still in his power to win the championship by beating Hamilton. That is no longer the case: Second place to Rosberg in the final two races will make Hamilton champion.

For Rosberg’s, his best chance is now that Hamilton will suffer some kind of mechanical misfortune in one of the final rounds. But it has seemed for some time like that was already the case anyway.

110 comments on “Hamilton can cruise to title after tenth win”