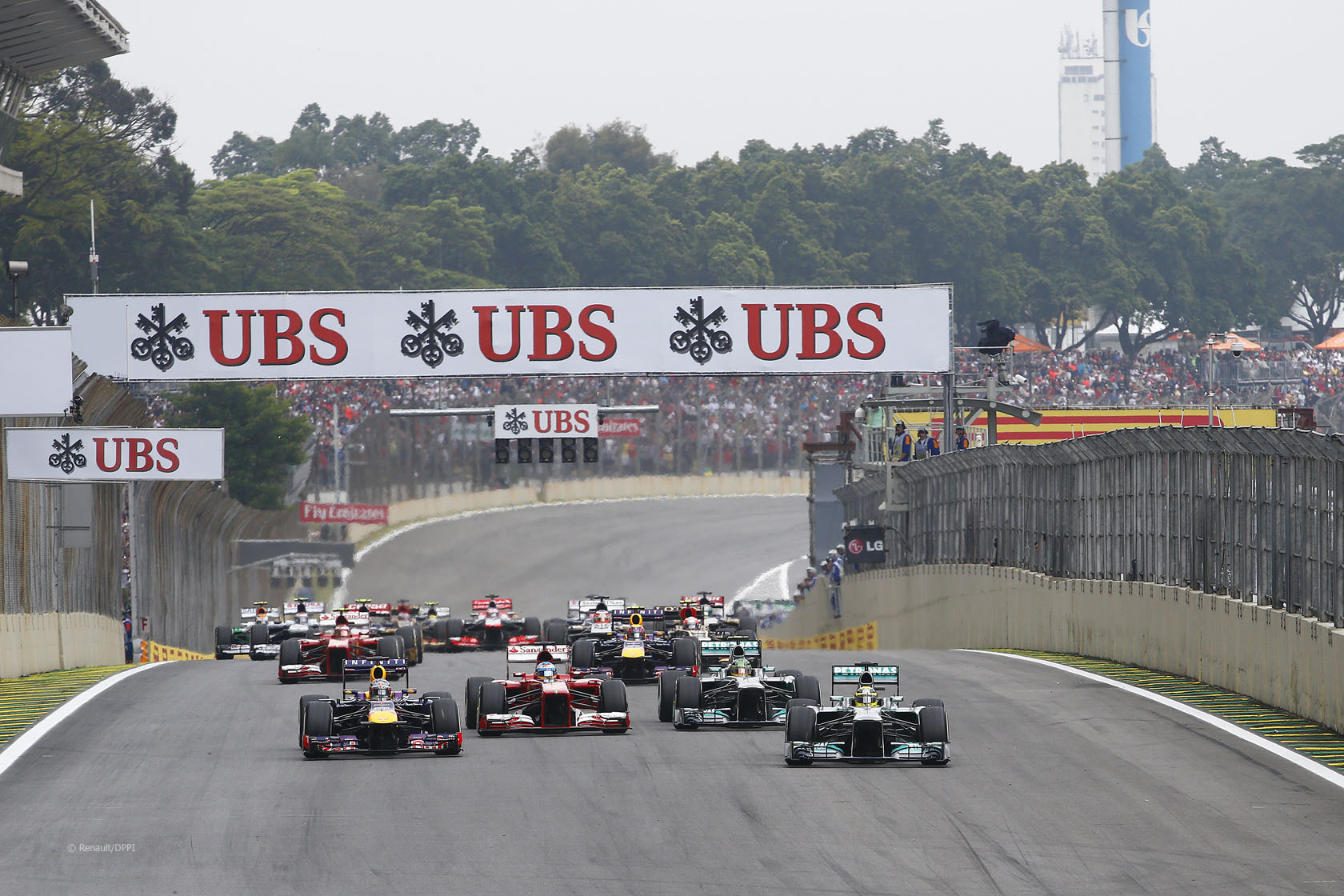 Over the last ten years, Interlagos has staged some of the most incredible championship-deciding moments in F1 history.

But that won’t be the case this year. This is partly because it is no longer holding the season finale, and also because its replacement, Abu Dhabi, is worth double points.

While the consequences of this rules change were clear to many before the season began, others are only just beginning to appreciate the strange situations which could play out thanks to ‘double points’. For example, each driver could have one win and one retirement in the next two races, but depending when and where they happen either of them could win the championship.

However the Brazilian Grand Prix will determine which Mercedes driver will hold the advantage heading into the final race of the season. The year-long duel between Lewis Hamilton and Nico Rosberg has become somewhat one-sided during this second half of the season, with Hamilton taking five consecutive victories. But at this stage of the season, just one incident or failure for either driver could well decide the destination of the drivers’ title.

As a regular host of the final round of the season, the Brazilian Grand Prix has been the stage for some of the most spectacular and memorable races of the modern era. All of the current champions on the grid – Alonso, Raikkonen, Hamilton, Button and Vettel – have secured at least one title in Brazil, often in dramatic circumstances.

The fast, flowing layout and long straights of the Interlagos circuit coupled with the ever-present threat of rain means that races are rarely dull around this 4.3km circuit. There are plenty of overtaking opportunities around the track, but there is no such thing as an easy pass around here, especially into the deceptively tight first corner.

Formula One first raced at Interlagos in the early seventies on a daunting, near-8km layout. That was curtailed when F1 returned to the track in 1990, but this year the track has seen its greatest overhaul since then.

Happily, although the track has been resurfaced, its layout has been largely untouched. However the pit entrance – a significant danger spot and a focus of controversy last year – has been relocated further up the main straight in an attempt to lower the risk of drivers hitting the tyre wall that separates the track from the pit lane. A Tarmac escape road has also been added to the inside of Bico de Pato (turn ten).

As one of the few anti-clockwise circuits on the calendar, the Brazilian Grand Prix is often one of the most physically demanding races for drivers. But with the reduced downforce levels of the 2014 cars likely to reduce corner speeds, this year’s race could prove slightly less of a challenge.

Following criticism that their compound choice for this weekend was too conservative, Pirelli have instead opted to use the soft and medium tyres on the new Interlagos tarmac. But with early forecasts predicting rain at some point during the weekend, the dry weather compound choices may prove a moot point.

For the second consecutive weekend, only 18 cars will attempt to qualify for a grand prix with Caterham and Marussia both absent once more. After a rumoured boycott by some of the smaller teams in Austin did not materialise, politics and financial inequality are likely to dominate discussions in the paddock again in Sao Paulo.

After a win-less season so far, Sebastian Vettel returns to the circuit where he claimed his most recent victory at the end of last year. With no grid penalties to concern him this weekend, a podium finish must be his target – team mate Daniel Ricciardo scored his eighth after leapfrogging both Williams drivers to third place in Austin. After five consecutive victories, Hamilton arrives in Brazil knowing that only a retirement on Sunday and a win for his team mate would see him lose his 24-point championship lead heading into the final round.

While Hamilton can afford to settle for second place in both races knowing that the title would still be his, it’s unlikely that the championship leader will approach this weekend any differently. The Brazilian Grand Prix is one of only two events on the current calendar he has never won, and it’s a track he has a special fondness for as the home of his hero Ayrton Senna, and the place where he won the world championship in 2008.

Realistically, Rosberg is now relying on misfortune for his team mate to help him overcome a substantial championship deficit. A retirement for Rosberg on Sunday may not count him out of contention, but he knows he cannot afford any mistakes or setbacks if he is to retain any realistic chance of snatching this world title from Hamilton.

After a tough race in Austin, it will take two very strong results for Ferrari to take back third place from Williams. That does not look likely after Fernando Alonso’s best efforts were not enough to beat the two Williams or Ricciardo home last weekend.

Kimi Raikkonen will be hoping that his weekend isn’t characterised by severe understeer problems like he experienced in the US that left him out of the points and a lap down.

Austin provided some very valuable points for Lotus and Pastor Maldonado after a miserable season so far, despite receiving two five-second penalties during the race.

Romain Grosjean’s chance of a result was ruined by a forceful move from Jean-Eric Vergne in the latter stages. But he is optimistic the team can sustain its upswing in form.

“[Interlagos] really suits my driving style so I’m really looking forward to it,” he saud. “Certainly, the E22 is getting more enjoyable to drive and the soft and medium Pirelli tyres – particularly the softs – seemed to work well for us in Texas so there’s good potential.”

McLaren’s improved performance in the second half of the season has seen them jump Force India – and they even have Alonso concerned about the security of Ferrari’s fourth place. with the double points finale looming. But Jenson Button will be anxious to avoid further tyre wear troubles like those which ruined his race in Austin this weekend.

With neither of McLaren’s drivers confirmed for next season, Kevin Magnussen needs to deliver two strong performances to maximise his chances of retaining his seat for 2015. The Interlagos circuit is new to him, however.

Any slim chance Force India had of challenging McLaren for fifth place in the constructors’ championship almost certainly disappeared in Austin after Sergio Perez crashed into Adrain Sutil’s Sauber on lap one and Nico Hulkenberg was halted by power unit problems soon after.

Thanks to his first-lap antics, Perez will be hit with a seven-place grid penalty this weekend, which will likely see him start around the rear of the field.

Luckily for the team, Hulkenberg has an excellent record around Interlagos, having taken a shock pole position here in 2010 and led 30 laps during the dramatic 2012 race before tangling with Hamilton. The team will be looking for more good things from the German in Brazil after some difficult races.

Daniel Juncadella will receive his third first practice run of the season on Friday, in place of Perez.

Sauber’s most promising weekend of the season so far in Austin went unrewarded after Adrian Sutil was forced out on the opening lap through no fault of his own. But despite the disappointment, Sutil is confident that the team might be able to challenge for that elusive first point this weekend.

“I think we can hope for points here,” says Sutil. “However, it will not be easy.”

Vergne continues to race aggressively as he seeks to secure a place on the 2015 grid, but his late move on Grosjean into turn one in Austin saw him pick up a five second post-race penalty. In a troubling echo of Perez’s 2012 campaign after his move to McLaren was confirmed, Daniil Kvyat hasn’t scored a point since his Red Bull promtion was announced. However he has prior F1 experience at Interlagos, having made an appearance in Friday practice here last season.

Despite a strong performance by both drivers in the United States secured Williams their best points haul since Monza, the team were disappointed to lose out on another podium after being out raced by Ricciardo and Red Bull.

Felipe Massa will be eyeing a return to the rostrum at home this weekend, but says Williams need to make more of the opportunities they get.

“We did a good job [in Austin], but not a perfect job,” he said, “and when you’re fighting with a top team you need to do a perfect job in whatever situation.”