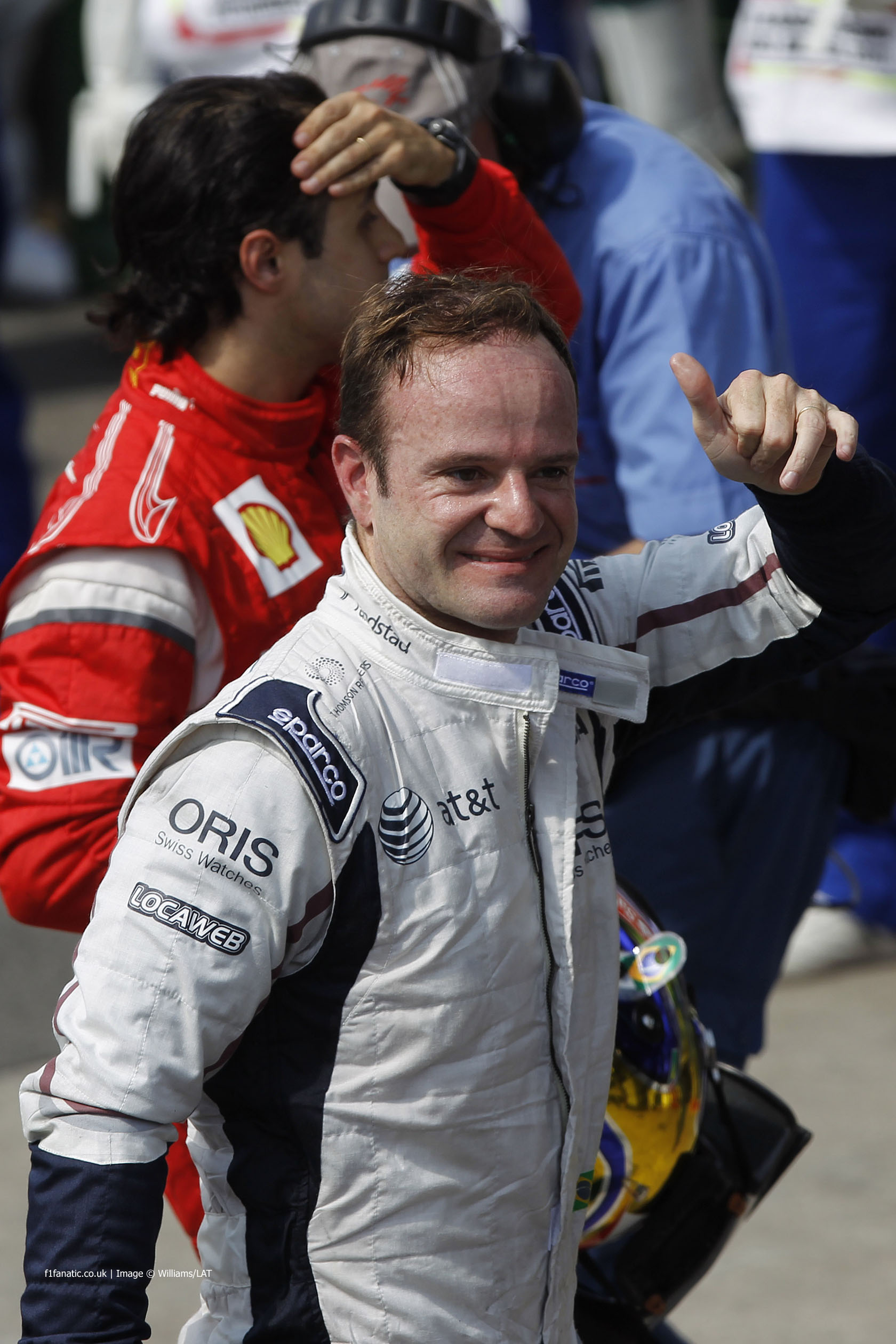 In the round-up: Rubens Barrichello would have driven for Caterham in the final three races of the season had the team not gone into administration.

F1 Fanatic is maintained partly thanks to the support of its readers. If you’re willing to contribute just £1 per month to the site you can browse it free of advertisements.

See here for more details and to sign up:

Donation are also accepted and all contributions are gratefully received.

“Encouraged by support from the Brazilian GP promoter Colin Kolles, there had been a deal being put together that would have seen Rubens replacing Kamui Kobayashi for the last three Grands Prix of the season.”

Lotus team prinicipal called in to negotiate boycott (The Telegraph)

“The three rebellious teams – Force India, Lotus and Sauber – have indicated that a one-off payment will not be sufficient to appease them. They want a greater share of F1’s £500 million of prize money.”

“CVC Capital Partners, the majority shareholders in Formula One, look ready to pay out an extra £100m to help the struggling smaller teams in the sport.”

Formula One Management has begun transferring its archive of video footage, which goes back to 1981, with a view to offering it online with commentary supplied via this crowdsourcing competition.

“It is what it is, I don’t really care [about potentially winning the championship on double points]. As long as I have one point more at the chequered flag at Abu Dhabi I don’t care why or how.”

Audi: No plans for F1 in short-term (Autosport)

Audi motorsport director Wolfgang Ulrich: “Yes, [Stefano Domenicali] has joined Audi, but we haven’t said yet what his job will be; no, he will not be involved in motorsport.”

“It’s positioning myself so that when I stop, I have something to continue on with. There’s going to be an undeniable urge to want to get back in the car.”

“The idea of the third cars not scoring full points – or only half points – would complicate the situation quite badly and I cannot imagine that the fans would appreciate that.”

“I can’t see any reason why he can’t get four or five or six championships. He is as good as we’ve got, and we’re very lucky to have him.”

“Unfortunately though, and presumably this is why Mercedes will support this, they too will make progress from the upgrades and it’s quite likely that their advantage will not be narrowed all that much by simply allowing the others a bit more time to bring in the full extent of their 2015 developments.”

A small grid in Austin (MotorSport)

“I was impressed with Nico Rosberg after the Grand Prix. He told me that the feeling of losing the race having started from pole ‘sucks’. So often sportsmen hide behind a mask of infallibility but Nico was open and honest saying he just struggled to get into a rhythm and only did so several laps after Hamilton had already passed him.”

@danielricciardo it doesn't seem @Dany_Kvyat will be a threat on this…😁😁👶👍!

@alo_oficial haha , my beard has plenty of time to grow 😉😄👶

People often ask what drivers get up to when not driving. Well this for starters. Oh the glamour of #F1! #BrasilGP pic.twitter.com/EPGykgNejK

It’s time for a change of approach at CVC, says @Beneboy.

I’m loving the irony of CVC management having to intervene to prevent a boycott that only came about due to CVC taking so much money out of the sport and allowing Ecclestone to run the sport as if it were his own private cash cow. Had they put as much effort into ensuring the sport’s finances were properly organised that they’ve put into maximising their own profits the sport could have generated far more profits for everyone, including their investors.

If CVC aren’t careful they could end up killing the Golden Goose when they could have made it bigger, healthier and able to lay a few more eggs with changes that even a casual fan could have recommended years ago. Hopefully the latest crisis will make them realise that the sport is more than just a way to make a quick buck, although I won’t be holding my breath as we’ve been here before and will probably be back here again in a few years – if F1 survives that long.
@Beneboy

Thierry Boutsen won the Australian Grand Prix which was held in atrocious weather 25 years ago today. Ayrton Senna crashed into Martin Brundle, which ended any hope he had of winning the world championship on appeal following his controversial disqualification from the Japanese Grand Prix.

The first attempt to start the grand prix was an absolute shambles. Many drivers hadn’t yet taken up their places on the grid when the race was started. In the dreadful conditions an inevitable series of collisions forced the stoppage of the race, and new champion Alain Prost withdrew saying it was too dangerous to race.

95 comments on “Barrichello was set for F1 comeback with Caterham”