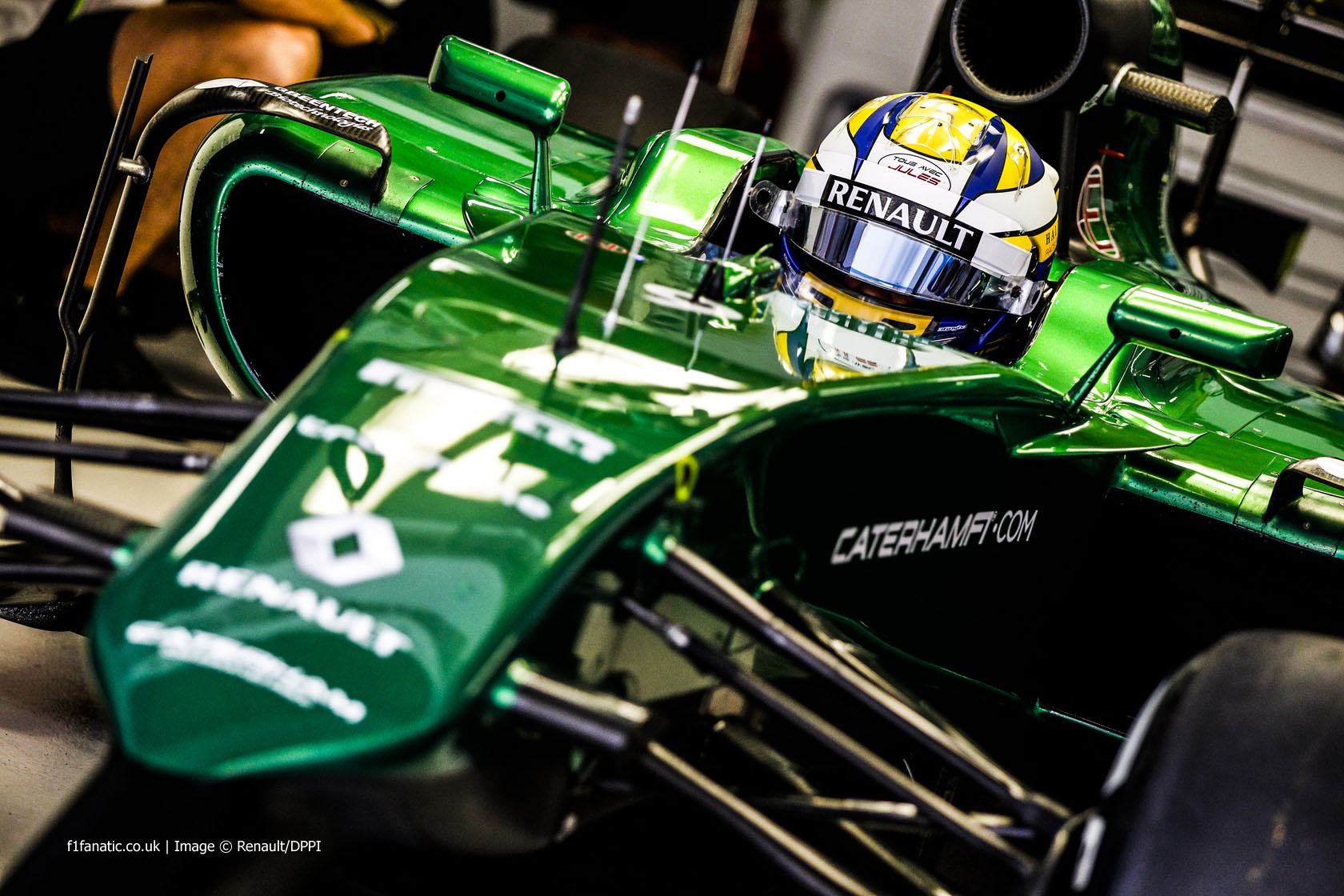 In the round-up: Caterham will be back on the grid at the final round of the season, according to administrators appointed to run the team.

“I think I’ve got enough confidence now to say I’d be very surprised if we were not racing in Abu Dhabi. I’m now really hopeful for the future of the team.”

Hamilton: Rosberg crash put me on ‘war’ footing (The Telegraph)

Monsha Kaltenborn: “Wasn’t it Marco [Mattiacci] who also said that he’s getting questions on ROI [return on investment] from his partners? How does he plan to keep that going so well with the way things are going here?”

“When the team wasn’t doing well, I felt massively frustrated, though I had no responsibility for it at the time. I hated hearing people say we were fading the way Tyrrell had done. It hurt.”

“The appeal court judge, Lord Justice Patten, on Wednesday refused to give Constantin permission to mount an appeal against Mr Justice Newey’s ruling.”

Where does all the money go? (BBC)

“Ferrari look like they will finish fourth in the constructors’ championship this season. But the structure of the rest of their contract means they will earn more money from F1’s income than Williams, who are on course for third, and possibly Red Bull, who will be second.”

“Formula One auto racing has revealed that its revenue from corporate hospitality came to $253.6 million over the past three years and grew at a compound rate of 3.7% despite the protracted economic downturn.”

5th of November. It's 1 month already since that terrible accident in the #JapaneseGP #ForzaJules we miss you.

Spot the difference. A look down the climb at Interlagos details a newly modified pit lane entry. #BrazilGP #F1 pic.twitter.com/0C6rq2UgwW

Did you know: @JensonButton was never under investigation at #USGP. Race control admitted it had mixed up car numbers for a moment.

Missing out on an F1 return with Caterham was a blessing in disguise for Rubens Barrichello, according to @Colossal-Squid:

I’m hugely fond of Barrichello, but reading this news I’d have to question why he’d want to return in such circumstances. There’s absolutely no doubt that the man truly loves Formula 1, and he had a career most drivers would kill for.

However, after being in it for so long, why come back for three races? Did he really think he’d be able to get a seat for next year, when there are younger brighter talents (and drivers with fatter wallets) trying to get in? Would he have been fit enough, or able to adapt to racing in these new cars? He hasn’t raced in F1 since 2011 and as we saw with Schumacher, it gets to a point where ever a few seasons outside of the cockpit can mean that the sport can pass you by.

Look at how Jerome D’Ambrosio and Heikki Kovalainen – far younger drivers – struggled in competitive machinery in 2012 and 2013. Being parachuted into a seat is not easy. In my opinion I’d rather see a fresh face get a shot in a car over a 42-year-old with over 320 races to his name.

The only benefit I’d see to Barrichello returning for the last few races was to give him a proper goodbye to the sport. The writing seemed to be on the wall for his future in F1 back in 2011, but he didn’t give himself the opportunity of properly celebrating his career and bowing out at Interlagos back then. It would have been nice to see.
@Colossal-Squid

A stunning victory in a rain-hit Japanese Grand Prix left Damon Hill one point behind championship leader Michael Schumacher with one race to spare on this day 20 years ago.

However Martin Brundle was involved in a shocking accident which left a marshal with a broken leg – and which could have had far worse consequences.