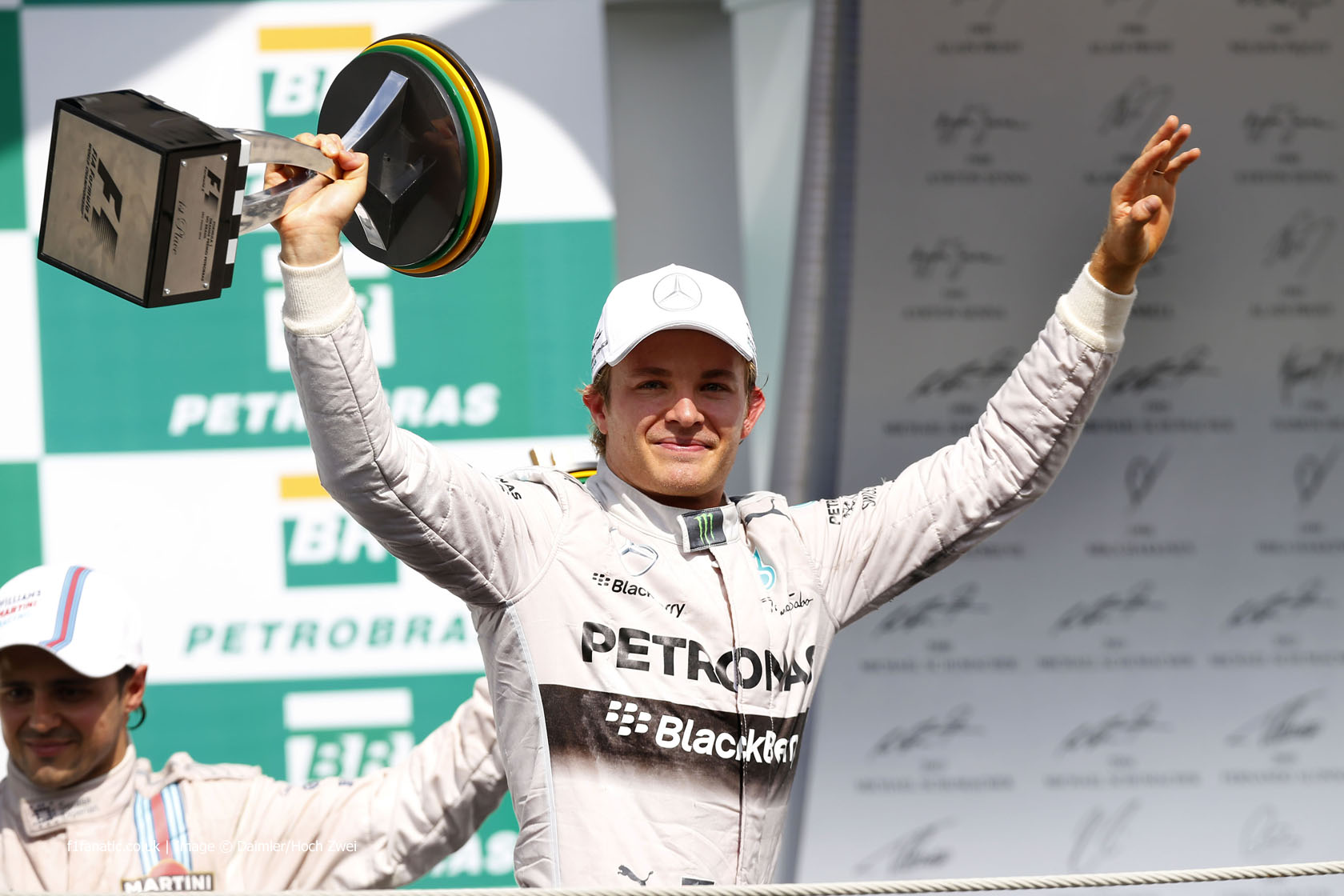 The drivers’ championship was never going to be decided in the Brazilian Grand Prix – but Nico Rosberg and Lewis Hamilton fought as if it could.

When the chequered flag fell after 71 laps Hamilton had to follow his team mate home for the first time since July. But at one point in the race he seemed to have victory in his hands.

A spin on the race’s 28th lap blunted Hamilton’s charge at the very moment he was poised to jump ahead of his team mate.

Hamilton gives chase from the start Friday practice had indicated drivers would have a hard time making their tyres last in hot conditions. But with rain forecast, it was expected not to be a problem.

It didn’t turn out that way. The rain stayed away, and as the race start time approached the temperature of the newly resurfaced track exceeded 55C. This was not what Pirelli, who had brought a softer range of compounds at the urging of drivers, had been hoping for.

The race began with most of the field on the soft tyres, expecting to be back in the pits very soon. The start was orderly: the leading Mercedes-powered quintet held their places, Rosberg ahead of Hamilton, the Williamses of Felipe Massa and Valtteri Bottas, and Jenson Button’s McLaren.

Behind them an over-cautious Sebastian Vettel, remembering his 2012 collision, ran wide at Subida do Lago, allowing Kevin Magnussen and Fernando Alonso to take advantage.

Sure enough Pastor Maldonado appeared on the pit lane from 17th on lap four, and the next time by Massa kicked off the front-runners’ pit stops.

The two Mercedes had the luxury of being able to wait a few laps longer, but by the ninth tour Rosberg and Hamilton had pitted. That put Nico Hulkenberg, Daniil Kvyat and Romain Grosjean – all of which had started on mediums – into the lead of the race.

Rosberg spent half a lap behind Grosjean which allowed Hamilton to get within striking range. But the lead Mercedes made quicker progress paste Kvyat and Hulkenberg, opening up a two second advantage over his team mate as he did so.

Hamilton makes his move – and slips up While the soft tyres had grained quickly, the degradation on the medium tyres was swift but more predictable. As they reached lap 20 Hamilton began edging towards his team mate, and when Rosberg pitted for the second time on lap 26 Hamilton made his bid for the lead.

The next time by Hamilton posted the fastest lap of the race so far – 1’14.030, seven-tenths faster than the previous best. But what was surprising was that he stayed out for another lap – something Hamilton himself wasn’t expecting.

“I thought I was going to pit at the end of that lap so I used everything of the tyres,” said Hamilton. “The next lap, I had nothing left.” And when he braked for Subida do Lago the car got away from him.

“Either way, at the end of the day, I made a mistake,” he said. “I locked the rears into turn four and with the under-rotation, just spun me around.”

“Second time it’s happened this weekend,” he noted, thinking back to Saturday’s practice session. “So no one’s fault but mine.”

It was a serious blow. Rosberg’s out-lap had not been particularly fast – eight tenths of a second slower than Hamilton’s corresponding lap would be. “I think ultimately it cost me the win,” said Hamilton, and though Rosberg did not agree Hamilton’s subsequent pace showed he was capable of taking the win away.

Button misses out on podium

Behind them the Williams challenge came perilously close to falling apart. Massa broke the speed limit at his first pit stop, but despite having to serve a five-second penalty the second time he came in, he avoided losing a place to Button.

Bottas had dropped out of contention by this point due to a slow pit stop due to a problem with his seat belts. Button therefore took over his fourth place, but a chance to beat Massa to third passed him by when he failed to put on schedule on the 49th lap.

“It all went pretty smoothly until my final pit-stop,” he said. “There was a bit of miscommunication about stopping, which meant I ended up doing an extra lap. That could have cost us a chance of the podium.”

Gaining the undercut on Massa might have helped Button get ahead, but the Williams driver came in with him on the following lap and the opportunity was lost. It did inadvertently cause a further problem for Massa, whoever, who mistook Button’s crew for his own and briefly pulled up in the wrong box.

Alonso and Raikkonen do battle Vettel’s second pit stop got him out from behind Alonso and on course for fifth place. Team mate Daniel Ricciardo had long since fallen by the wayside with a suspension failure, which he initially suspected was a brake problem.

The Ferrari drivers supplied some of the most entertaining action of the race as sixth placed Kimi Raikkonen sat it out with Alonso for lap after lap, the absence of any team orders from Ferrari becoming increasingly conspicuous.

Raikkonen was two-stopping, however, and Alonso’s 17-lap fresher tyres eventually made the difference despite the fact he was having to save fuel. A straightforward pass in the DRS zone on the start/finish straight ended their scrap.

It couldn’t have ended a moment too soon for Ferrari, however, as Hulkenberg was flying after making his late switch to soft tyres. He shot past Magnussen and was taking two seconds per lap out of Raikkonen. The pair were separated by just two-tenths of a second at the flag.

Daniil Kvyat was in a similar situation to Hulkenberg, and he too was unable to deprive Bottas of the final points-paying place. Rosberg halted his team mate’s five-race winning streak, but Hamilton’s second place means he retains the advantage with a single race to run.

The controversial double points plan, which was cooked up in the hope it would ensure a final race showdown, has proved unnecessary – even under last year’s points system the title would still be open. However it puts Rosberg in a slightly stronger position. If he wins in Abu Dhabi, Hamilton must finish second again to claim the title.

Rosberg needed to turn the screw on Hamilton ahead of the showdown and he did just that. Afterwards it was clear he’d been affected by his defeat in America one week earlier, and was relieved to have put that behind him.

“Austin was a tough day for me on Sunday,” Rosberg said, “it was important for me to just improve, because just didn’t do a good enough job in the race in Austin.”

“Today I managed to do that, so that I’m happy about. I learned from Austin and did better so that’s a big step in the right direction. One race too late but there’s still all to play for.”