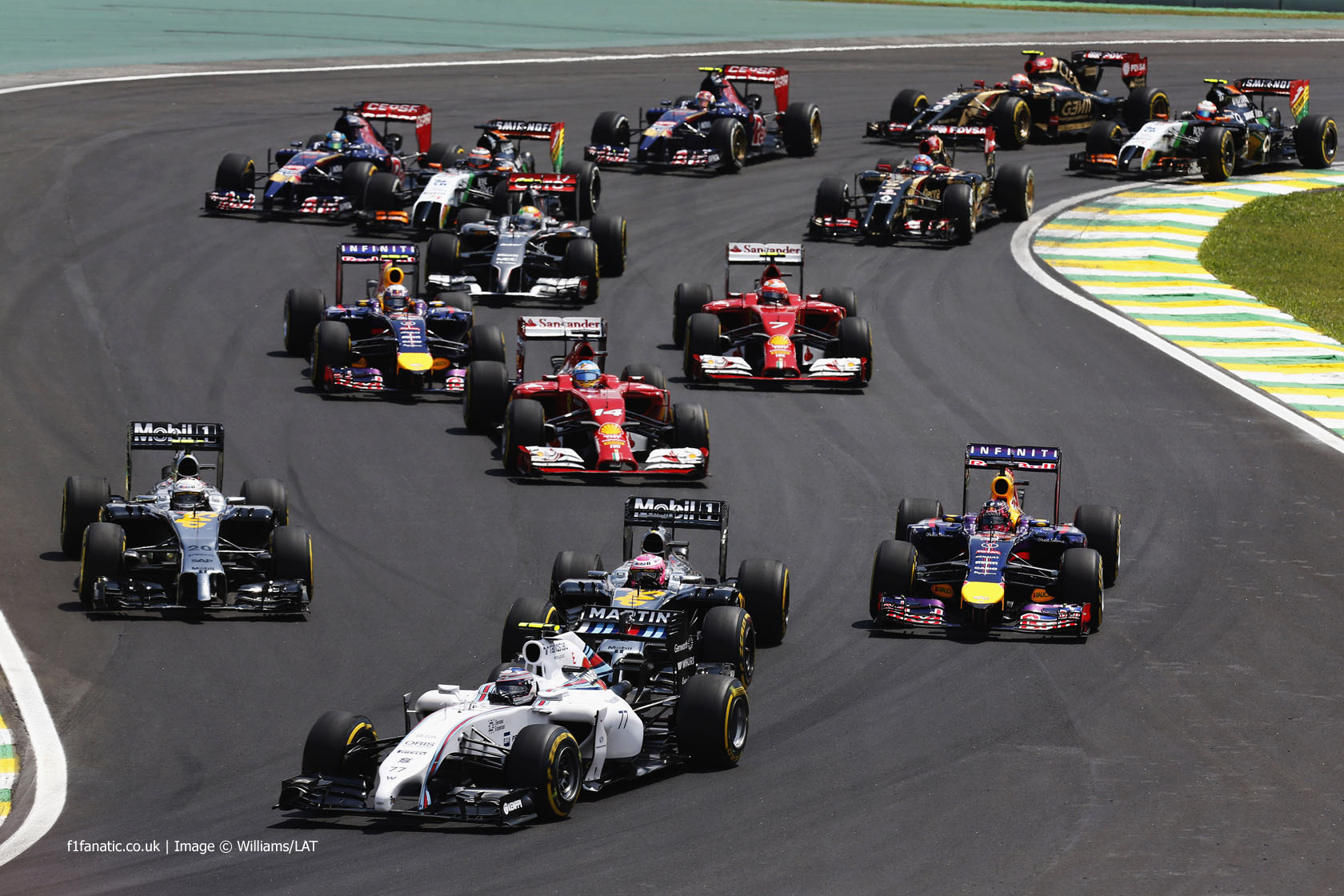 Sebastian Vettel – Said he was thinking of how he almost lost the 2012 championship when he gave Magnussen room on the inside of Descida do Lago on the first lap. Alonso got ahead of him as well, but Vettel jumped back in front of both before the end of the race to take fifth and move up to fourth in the championship.

Daniel Ricciardo – Started behind Vettel but got onto his team mate’s tail early on. A suspension failure put him out for the first time since Malaysia, however. Nico Rosberg – Began the weekend n the best possible way, leading all three practice sessions and then doing the same in qualifying to claim his tenth pole of the season. Hamilton came at him hard during the race, but unlike in Austin Rosberg never looked like giving him a chance to pass on the track.

Lewis Hamilton – Described himself as “probably happier with second than I’ve ever been” after a lock-up at Bico de Pato allowed Rosberg to pip him to pole position by three-hundredths of a second. A more serious mistake in the race cost him his best chance to get ahead of Rosberg, though Hamilton said he was surprised to be left out for a another lap ahead of his second pit stop, when the spin occurred. The damage was done, and Hamilton simply couldn’t make his superior pace count.

Fernando Alonso – After a power unit failure on Saturday, Alonso skipped doing a qualifying simulation run in final practice. Despite an aggravating start to qualifying he took eighth, then gained a place on the first lap. Fell behind Vettel in the pits but passed Magnussen, then after a close scrap he demoted Raikkonen too for sixth place.

Kimi Raikkonen – Said he had a “better feeling in the car” and “no major problems” but was out-qualified by Alonso as usual, lining up tenth, albeit less than two-tenths of a second off fifth place. Managed to make a two-stop strategy work and but for a slow pit stop he might have been able to beat Alonso home.

Romain Grosjean – The Lotus pair were eliminated in Q1 and Grosjean held on to his 14th place at the start. After abandoning his attempt to run a two-stop strategy, an engine failure put Grosjean out.

Pastor Maldonado – Felt his car was better than it looked in qualifying, where he was slowest of the 18 runners. Made the same strategy switch as Grosjean and spent part of his third stint trying to pass Bottas, who eventually finished tenth, before dropping back. Jenson Button – “I didn’t enjoy driving the car on Friday,” said Button after qualifying, “but we solved a lot of those issues overnight”. He took fifth on the grid and spent the race chasing the Williams pair. Moved up to fourth thanks to the problems Bottas suffered, but missed a chance to jump ahead of Massa by pitting one lap too late.

Kevin Magnussen – Found it difficult to get the soft tyre to work on the first lap but was only fractionally slower than his team mate in qualifying. Dropped back in the race, however, finishing over 20 seconds behind Button.

Nico Hulkenberg – “For various reasons the car is not in complete harmony with this track,” Hulkenberg admitted after Force India’s six Mercedes-powered rivals all qualified inside the top seven. He at least made it into Q2, unlike his team mate, and using an alternative strategy he was able to take eighth from Magnussen at the end of the race, and was poised to pass Raikkonen when the chequered flag fell.

Sergio Perez – Test driver Daniel Juncadella crashed his car on Friday so Perez didn’t do a single lap of the track until Saturday. His seven-place grid penalty meant it mattered little that he failed to escape Q1. Running the same strategy as most of those around him, he rarely looked like making his way into the points.

Adrian Sutil – Had to start from the pits after late repairs to his car, which proved the prelude to a frustrating race as he also lost five seconds in the pits on his first visit. It was therefore no surprise he was the last driver running.

Esteban Gutierrez – Qualified eleventh and passed Raikkonen at the start to hold tenth, but any hope Sauber had of finally scoring a point proved short-lived. He struggled with overheating tyres and dropped back to 14th at the flag.

Jean-Eric Vergne – With Max Verstappen driving his car on Friday morning and a problem halting him early in the second session, Vergne began the weekend on the back foot. He was eliminated in Q1, and spent much of his race stuck behind Perez, unable to pass the Mercedes-powered car even with the assistance of DRS.

Daniil Kvyat – Despite being relegated behind his team mate due to the continuation of the power unit penalty he picked up in America, Kvyat gained four places at the start and went off in pursuit of a points finish. He came close to it as well, pressuring Bottas at the end of the race. Felipe Massa – Pipped Bottas to third on the grid but nearly threw away his chance of a podium place when he broke the speed limit in the pits on his first visit, then pulled into McLaren’s box by mistake during a later stop. When on the circuit things went much better, and he duly claimed his second, crowd-pleasing podium finish of the season.

Valtteri Bottas – “I had a few mistakes in Q3 so I probably left a tenth out there,” said Bottas after qualifying, indicating he could have beaten his team mate to third place. His race went awry when he lost time in the first pit stop having his seat belts adjusted, and a subsequent problem dropped him further back. Mired in the pack he struggled with degreadation and graining, and couldn’t use the superior straight-line speed of the Williams to make progress.

Who was the best driver of the 2014 Brazilian Grand Prix weekend?