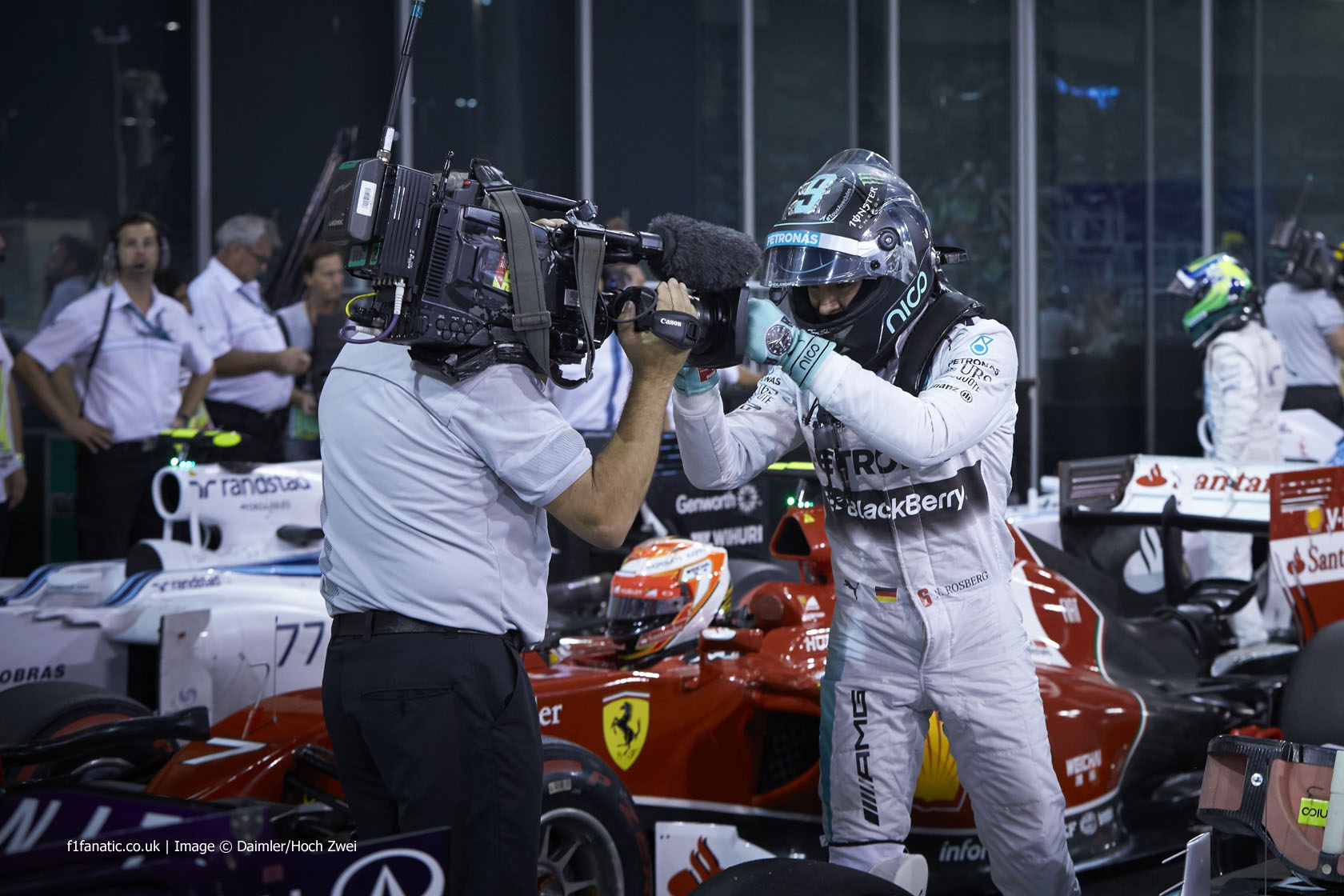 Nico Rosberg achieved the first part of his plan to wrest the championship from his team mate by claiming pole position for the Abu Dhabi Grand Prix.

But he needs to do more than just win tomorrow’s race to take the title – he needs someone to finish between him and Lewis Hamilton. The fascinating question now is whether he can do anything to help Mercedes’ rivals do that.

It promises to be a tense title-deciding race between the pair.

The best outcome for Hamilton in tomorrow’s race would be for him to get ahead of Rosberg at the start and stay out of range of his team mate. Beating to pole sitter to turn one on the short, 300m run to turn one is not unheard of but it is uncommon. It had never been done until Sebastian Vettel did it to Mark Webber last year, and starts were never one of Webber’s strong points.

If he fails to get the job done then Hamilton will be well aware of the difficulty of passing at Abu Dhabi – even with two DRS zones coming soon after each other. “The speed difference you need to have to overtake the guy in front is really very big at this track,” noted Rosberg earlier.

At the same time Hamilton will be aware that the biggest threat to his championship chances comes from getting involved in an incident – whether it’s with his team mate or the two fast-starting Williams drivers behind him.

Despite Pirelli having brought a softer combination of tyres for this race, expect to see drivers erring towards using the more durable soft tyre.

“The way the tyres are behaving here is quite different from the past in Abu Dhabi so we had to amend our set-up,” explained Sergio Perez.

“We hope this will give us some advantage tomorrow. In any case, the strategy choices are quite limited on this track so I don’t expect any adventurous choices from anyone on the grid.”

There is little to choose between a two- or three- stop strategy, according to Pirelli. They expect the latter to be less than two seconds slower but the key drawback is it will leave drivers spending more time in traffic – always a problem at Yas Marina.

However with the pace the Mercedes drivers have shown it may well prove a realistic option, especially if there is no first-lap incident to trigger a Safety Car intervention.

Another key factor in this race is the presence of the Red Bull drivers at the back of the grid. They can maek their tyres last longer than most cars due to their superior downforce – notwithstanding how it may have been achieved, which is the reason why they find themselves on the back row.

As we’ve seen already this year, that allows them to use the ‘undercut’ more aggressively, and pit sooner to get the benefit of fresher tyres before their rivals in the knowledge that they’ll be able to make them last later in the race. The RB10s look like prime candidates for three-stop strategies.

Will the winner take it all? Share your views on the Abu Dhabi Grand Prix in the comments.

30 comments on “Tense title-decider in prospect at Yas Marina”