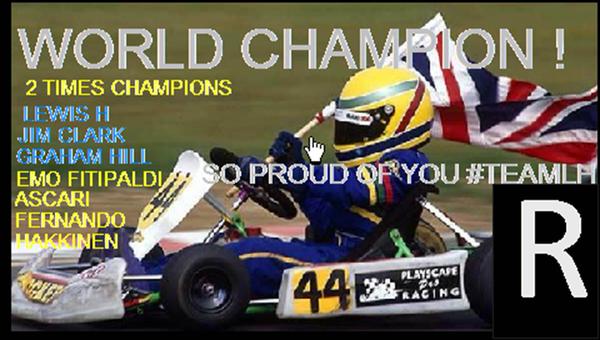 A special message for Lewis Hamilton was displayed on his steering wheel after he became the 2014 world champion.

Toto Wolff was ready to start the championship party after the race, while Lotus mechanics shared a joke after one of their cars on fire.

Here’s the Twitter story of the title-deciding season finale in Abu Dhabi.

Two British drivers took titles in GP2 and GP3 this year. It was Lewis Hamilton’s turn to take the championship in Formula 1.

Lol-Ing at drivers braking too late, cutting the track and just resuming in their same position in GP3… Ridiculous. #toomuchrunoff

.@LewisHamilton just rushed from his room to watch the start of the @GP2_Official race! Close eye on Turn One… #AbuDhabiGP #DesertDuel

Factory all set up for a live screening! You may see this on TV later :-) We've got every base covered #DesertDuel pic.twitter.com/BL07gp9qUD

So seems Anthony has surprised Lewis with a visit to the biggest race of his life. Lewis said again last night he didn't think he was coming

@alanbaldwinf1 @Jason_A_Swales @F1inSchoolsHQ Lord this is all so silly. The "product" is not rolex. The PRODUCT is exciting racing…

An emotional day for Fernando Alonso and Sebastian Vettel as they made their final starts for Ferrari and Red Bull respectively.

One last hurrah. A standing ovation and applause from the Team welcomes Seb into the garage. #DankeSeb #F1 pic.twitter.com/BvRsEueHxX

'Champion' (noun) 1. A person especially in a sport or game that has defeated or surpassed all rivals in a competition. #F1 #AbuDhabiGP

Therefore, who should be champion? The driver who has already guaranteed he will win more than half of this year's races. #F1 #AbuDhabiGP

Stunning start from @LewisHamilton!!! he races into the lead!!! #F1 #AbuDhabiGP #DesertDuel

Halfway through the race, it looked like Nico Rosberg’s only hope of winning the championship was a reliability issue on one of the Mercedes cars – unfortunately for him, it happened on his one.

Rosberg: "I'm losing engine power." Is this the end of the championship? #F1 #AbuDhabiGP

"Please, please look into it and tell me what I can do!!" @nico_rosberg fighting on with all he's got!! Keep going Nico!!! #F1 #AbuDhabiGP

Hamilton told he needs to pick up the pace because of Massa. Hamilton: "I'm not racing Massa any more." #F1 #AbuDhabiGP

Big respect to Rosberg for saying he wants to continue to the end despite overwhelming car problems. #F1 #AbuDhabiGP

Button: "Whatever happens over the next few weeks it's been an honour, guys." #F1 #AbuDhabiGP

Nice moment as Nico goes up to see Hamilton before the podium. Share an embrace. Good sport all round. #AbuDhabiGP

A lesson in how to take defeat with grace and maturity and generosity from Nico Rosberg just now. Congratulations to him.

Toto Wolff: ‘We are taking over a nightclub and we are going to take the nightclub to pieces.'

Having been there when Lewis did this 1st time around, I assure you today will mean as much to his mechanics & engineers as it does to him.

Congratulations all the way from Stuttgart for @LewisHamilton! One team, one dream – #FormulaWon :) #AbuDhabiGP #F1 pic.twitter.com/DJCIhXrbFY

Having been there when Lewis did this 1st time around, I assure you today will mean as much to his mechanics & engineers as it does to him.

Hamilton was told to select 'driver default 44' on his in-lap. This is what his screen showed: pic.twitter.com/I8t4XyiNqf Via @MercedesAMGF1 #F1

Massively chuffed with P9. To all the guys n girls in the TEAM, JB, GL, Max and of course Jules, BIG THANKS. Proud to be a part of it! #JB17

Williams ended 2014 with their first double podium of the year.

Rob Smedley: To get our best result of the season in the final race is a fitting tribute to all the work we have done, it is a fitting end

Very happy to finish my first F1 race and had good fun on the way! Happy with how the weekend has gone considering everything (1/2)

You suit red more than green @WillStevens_ but well done on an impressive F1 debut. (This we can say, as you did not nick our points)

Great way to finish the season! Only annoyed about the 5sec penalty. That was 1st lap action. No deliberate pushing out!

Tough end.Would have loved to fight til last corner. Congrats, lewis.u deserve the title. Special year with the team. pic.twitter.com/RHzCFvtK3n

In 2012, only 39% of @f1fanatic_co_uk readers believed that Hamilton would win the DWC with Mercedes until 2015: http://t.co/DOAEmLxCLe

What a season! Feel privileged and proud to have had the chance to work with @LewisHamilton and everyone that makes this team so great! #F1

Interesting to see Ron Dennis talking intently to @JensonButton's manager post race, and then calling JB in for a quiet sit down chat

An explanation of the laughter in the Lotus garage after Pastor Maldonado’s car caught fire.

When they put the fire away, 1 of the guys seating at the front said:"they shouldn’t put it down; they should let the whole thing burn away"

Wow that was a pretty fun race 😊 firstly big congrats to the new WC @LewisHamilton well deserved a top season! As for us I thought we made..

.. the most out of our pitlane start and charged from start to finish to take 4th place to cap off an amazing season. Had a blast this year!

Tucking Seb's Bull in for the night, one final time! #DankeSeb #AbuDhabiGP pic.twitter.com/grLflWgSqQ

There's only one thing you can you after such an amazing day for the team………… #FormulaWon pic.twitter.com/BrDNX9me3Z