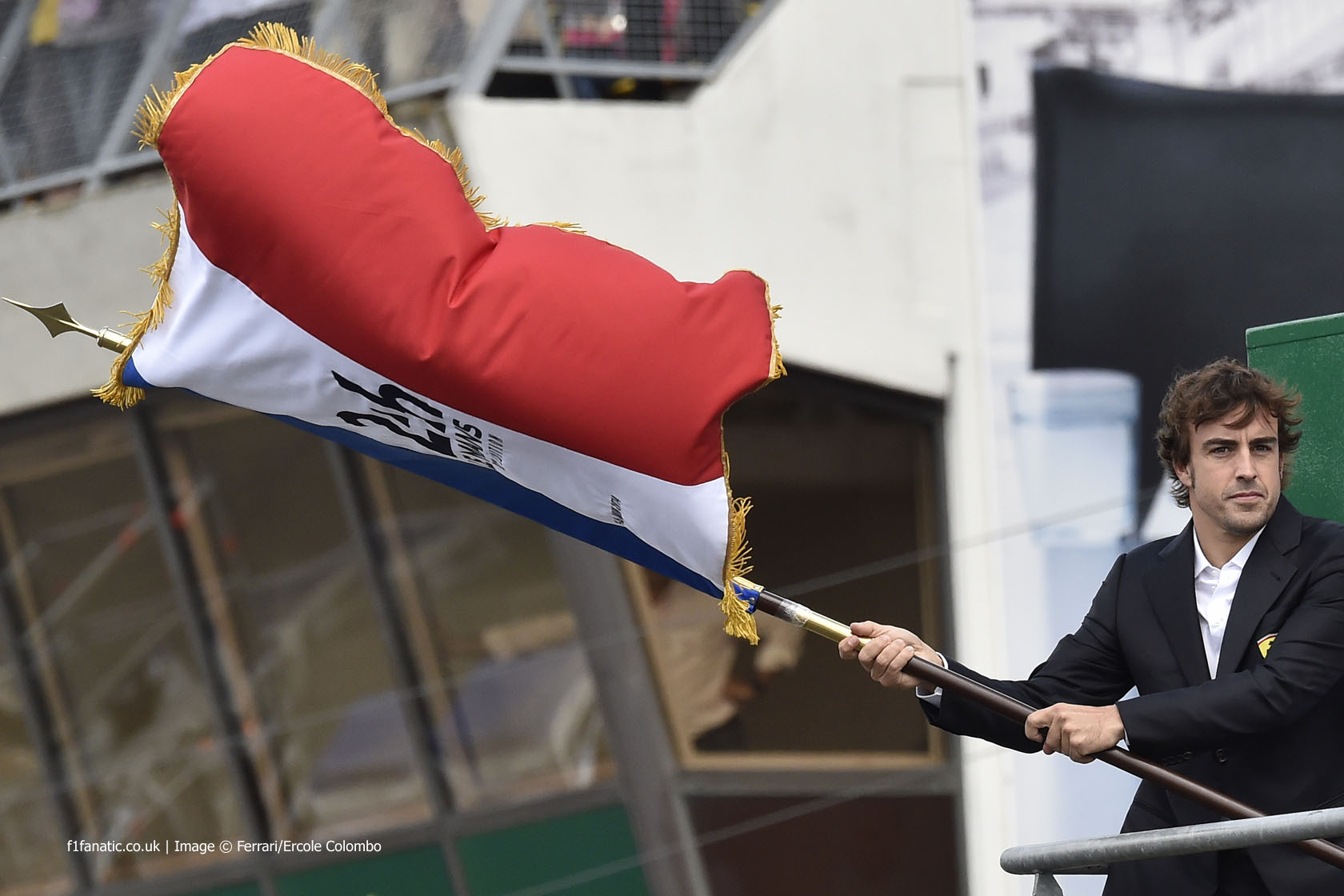 In the round-up: Fernando Alonso, who waved the starter’s flag at the Le Mans 24 Hours this year (pictured), wants to join Nico Hulkenberg and Mark Webber at the race in 2015 but his rumoured new team McLaren will not let him.

“Fernando Alonso looks unlikely to be able to squeeze the Le Mans 24 Hours into his 2015 schedule, despite trying hard to convince McLaren to grant permission for him to do the race.”

“You have two years and you take this time to do the best you can – always.”

“Ex-Diageo chief executive Paul Walsh is being lined up to become chairman of the Formula One board, a move that could signal the beginning of the end of Bernie Ecclestone’s control of the motorsport.”

Why Ferrari has failed (MotorSport)

“It is not believed that Mattiacci’s departure had anything to do with his Alonso negotiations. Whatever it was that caused him not to be even given another position within the Fiat empire was unrelated to how he performed his brief role as Ferrari chief.”

“Another suggestion is for teams to acquire six-second video clips (of their own cars, note) from the commercial rights holder for promotional purposes, but the proposal ends ominously: ‘We’ll need to be willing to offer Bernie [Ecclestone] something in exchange for this…I don’t know what…'”

“The move piles pressure on one of India’s most-prominent businessmen, who is also being pursued by other Indian banks for not meeting loan repayment obligations linked to his Kingfisher Airlines.”

“At trial, Louis Di Resta asserted that at the Hockenheim DTM meeting on 17th May 2009, Anthony Hamilton said to him words to the effect that his son ‘was not good enough’, ‘had not proved himself’ and accordingly there were no opportunities for him in F1. Anthony Hamilton denied this but Paul Di Resta gave evidence that these statements were contemporaneously relayed to him by his father and this led to a breakdown in the management relationship.”

@K_Longsausage fly away to European, that's gonna be a fun pack up!

Of all the racetracks over the world that #F1 could visit, it chooses to return to a soulless, rubbish race track in the middle of nowhere.

I'm sorry I can't answer your questions about my future just yet, hopefully soon 😉. Once again thank you for all the support guys. #JB22

@Lotus_F1Team Congrats for your 500k followers. It means Lotus F1 Twitter team is far better than it's racing team. Hehehe

The FIA’s desire to see all races start at least four hours before sunset (except those held under artificial lights) could lead to several races starting earlier in 2015:

If such a rule is going to be enforced, then the start time will have to be changed for at least five races:

Honda, who are returning to F1 as McLaren’s engine supplier for next season, pulled their factory team out of the sport six years ago today.

63 comments on “Alonso also wants to race at Le Mans”