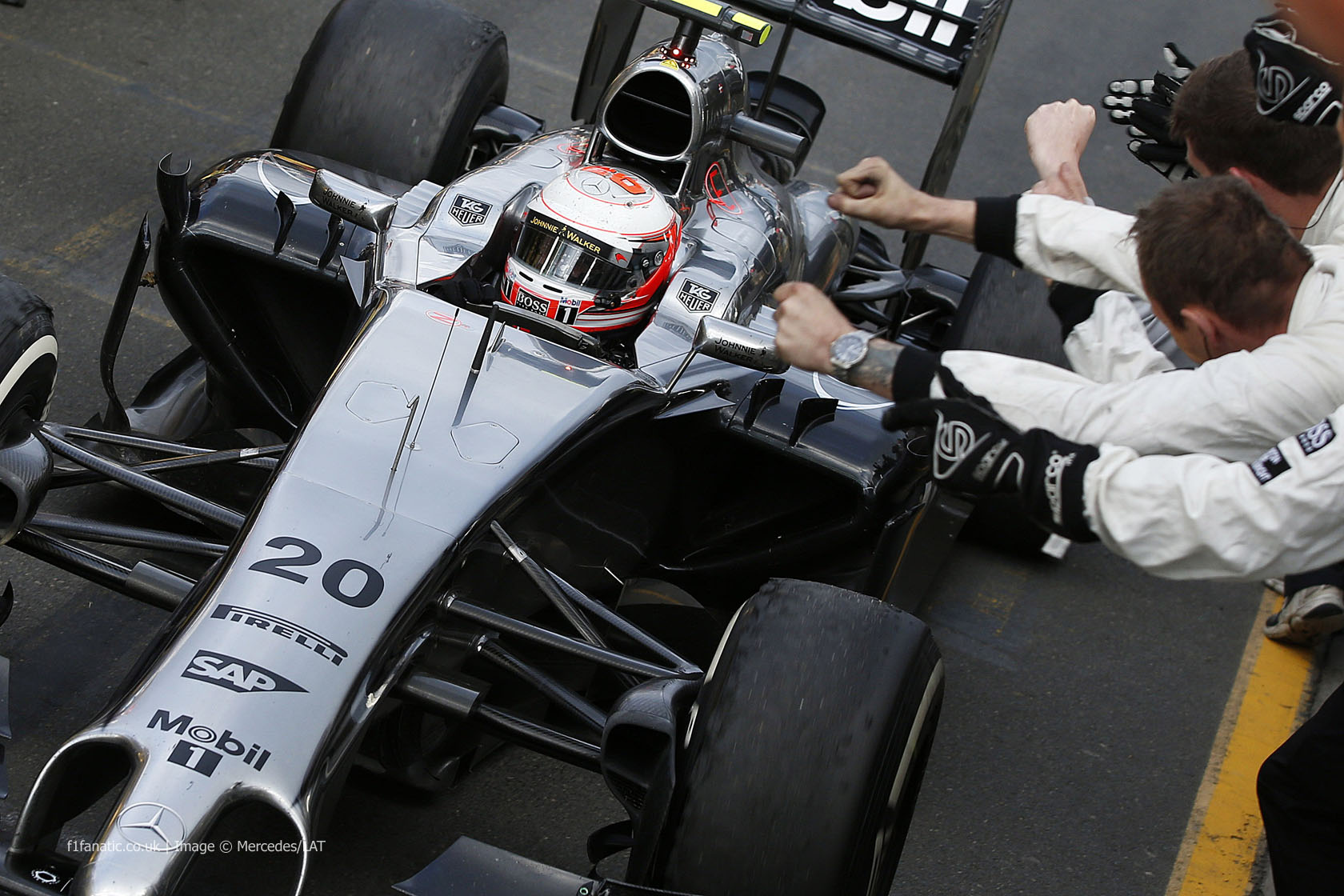 Early in 2014 McLaren seemed to have bounced back from the disappointments of last season. They had produced an uncompetitive car and lost their title sponsor in 2013, and only the impending return of Honda gave them cause for optimism.

In the off-season Ron Dennis reasserted his control over the team’s F1 operation for the first time since 2009 and Martin Whitmarsh was quietly shown the door. Dennis hired new racing director Eric Boullier, and the former Lotus team principal vowed McLaren’s low of 2013 “should be a benchmark for us to never do it again”.

Had a title sponsor been found for the Australian Grand Prix, they would have enjoyed McLaren’s best result of the season. Rookie Kevin Magnussen made a brilliant start to his F1 career, finishing third on the road ahead of Jenson Button, who’d been delayed in qualifying. The pair gained another position post-race when Daniel Ricciardo was disqualified.

But this proved a false dawn. The aerodynamic shortcomings which were masked at the stop-start Albert Park course dogged them elsewhere early in the season. Novel rear suspension ‘blockers’ appeared to do little to aid their cause.

Meanwhile the team’s cars remained without a title sponsor. Although some new names appeared during the season, the prominent places on the car’s livery were occupied by the team’s existing sponsors, with the exception of those such as Hugo Boss who had defected to Mercedes.

Reliability was generally a strength: Button and Magnussen covered more racing laps than any other drivers. What problems they did have struck at inopportune moments, such as in Bahrain and Singapor where strong results were in the offing. They were also consistently the quickest team in the pits.

But from the middle of the season there were clear signs that, despite having produced an aerodynamically weak car for the second year in a row, upgrades from the factory were putting that right.

Button was in superb form at home in Silverstone and converted a season-best third on the grid in a wet qualifying session to fourth in the race. Two weeks later in Germany Magnussen also qualified on the second row, but his race was ruined at the first corner when Felipe Massa turned in on him and flipped over.

Unfortunately the team proved capable of tripping over themselves. In Hungary Button was again running strongly on a damp track, and McLaren’s rapid reaction to the appearance of the Safety Car should have put him in contention for a podium finish. But while every other teams correctly switched their drivers to slick tyres, McLaren opted for intermediates, and that mistake wrecked Button’s race.

However by now McLaren could at least count on out-scoring Force India most weekends. Late in the season they passed their rivals to reclaim fifth place in the championship, where they also finished last year.

“Rebuilding” was the word Boullier used to describe the team’s preparations for the return of Honda next year, and further signs of that came at the end of the season.

Peter Prodromou, one of Red Bull’s top aerodynamicists, returned to McLaren and the first fruits of his work appeared in time for the Abu Dhabi Grand Prix. The front wing used by the team at Yas Marina bore striking similarities to Red Bull’s, the key difference being McLaren’s didn’t get them thrown out during qualifying.

A Honda-powered test hack ran at Silverstone and was also taken to the Yas Marina test. However at the latter it completed just five laps in two days.

And even at this late stage in 2014 key questions about McLaren’s 2015 campaign remain unanswered. A title sponsor for 2014 never materialised, and 12 months have now passed since the first deadline for announcing their replacement for Vodafone.

But the greatest cause of debate around the team at present is the identity of its drivers for 2015. Dennis has always prided himself in signing the best two drivers available for his team, but the chance to bring Fernando Alonso back to the fold appears to have paralysed their decision-making process. It remains to be seen which, if either, of the team’s current drivers will be retained.

Of course it’s reasonable for McLaren to make that decision in their own time. But it’s a sign the “rebuilding” still has some way to go.

55 comments on “Questions hang over McLaren as 2014 ends”