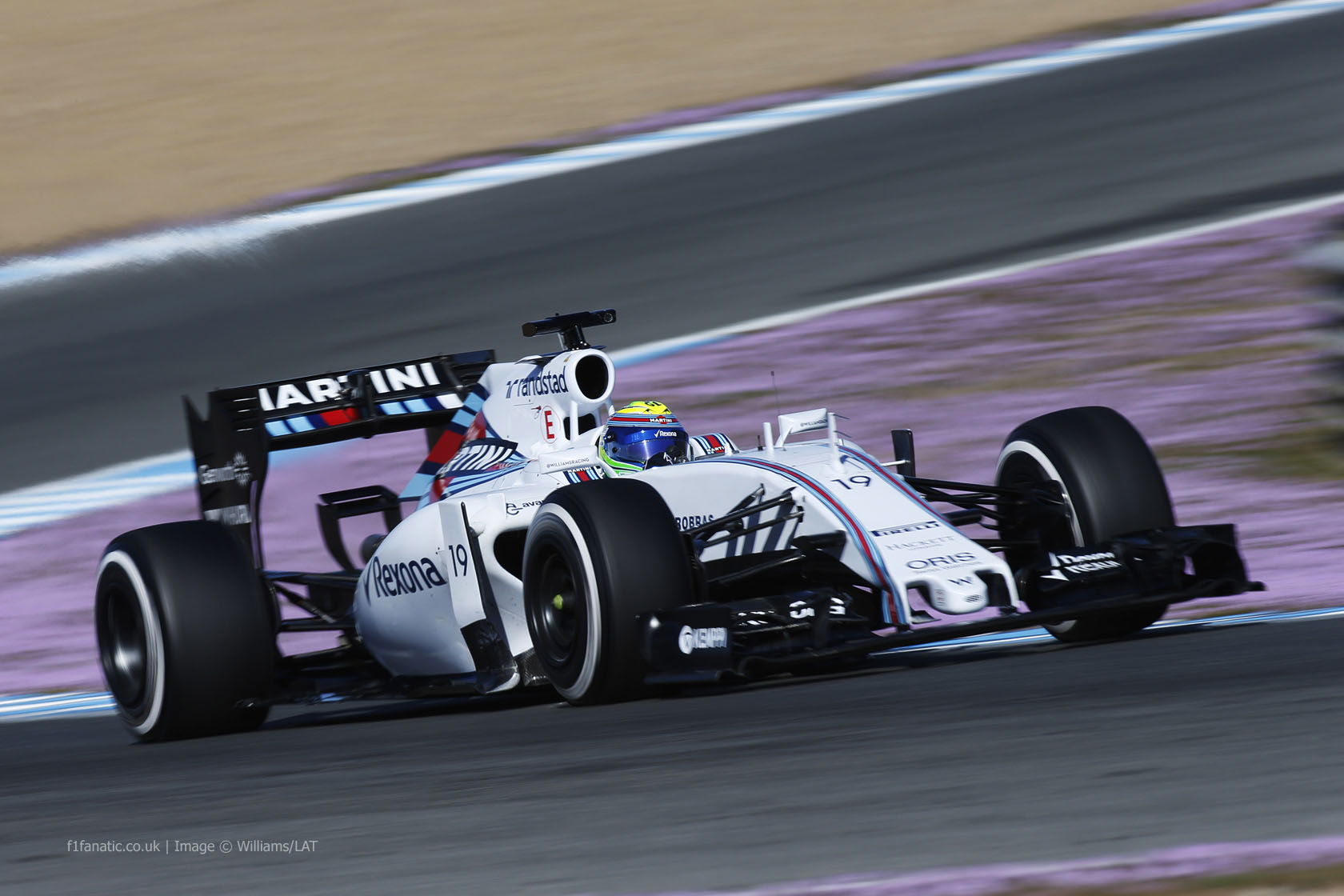 Williams’ chief test and support engineer Rod Nelson described the first week of working with the team’s new FW37 at the Jerez test.

You finished last year with quite a strong package. How difficult is it to balance refining that and taking the risk of trying to make a step?
“It’s very easy to get local minima when we try to optimise something. You’re kind of looking at a ten-dimensional array or something and you’re trying to find that absolute optimum and you tend to kind of home in on what’s close to you so you try a little bit stiffer, a little bit softer, a little bit more camber or whatever. And you end up with a local minimum lap time, but there might be another one over here somewhere.

“So the temptation is to kind of stick with what you know. So, absolutely correctly, you’ve got to kind of feel around that in a little way. And that’s one of the things people use [Comptutaional Fluid Dynamics] for. A wind tunnel’s always going to give you better results but CFD will give you directions to move into.

“So for instance on the aero side it’s relatively easy to see what a good job you’ve done because you take last year’s car, you put the new style of nose on, you lose some downforce, and then you start developing next year and you’ve got the target of what you achieved last year with the same regulations. So you know what you’ve lost in one area you know you’ve got to get it back.

“That’s being fairly analytical about that, what’s more difficult is things like ride and tyre degradation through a long run at a pretty hot circuit. That’s the information we struggle to get until we go to a really hot circuit with tyres that are on the edge. So vehicle dynamicists obviously do what work they can and during testing, during the season we do whatever work we can on decent circuits with good weather rather than six-degrees circuit temperatures like we’ve got today.”

How far off optimum performance is Mercedes engine output?
“I can’t give you an absolute number – I don’t know the absolute number is the honest truth – but I couldn’t give you one anyway. I’m sure it’s true to say all four manufacturers this year have been far from optimum at the moment or some way off optimum – ‘far’ is probably stretching it a little bit. But we’re not running quali-style maps and modes and all the rest of it and I wouldn’t believe anyone is.

“Renault have got essentially a very highly developed version of their last year’s engine. Mercedes have obviously been doing work, Honda’s brand new and Ferrari I’m sure have done quite a bit of work. So we’ll all be some distance off where we hope to be in Melbourne.” How much of a setback are the new nose design regulations?
“I know the numbers but I’m not an aerodynamicist. There was a hit and it was a reasonable challenge to get over that loss and I’m sure that’s the same for all the other teams. The more you optimise around one architecture the more of a hit you’re likely to get when that’s changed all of a sudden.

“If you’ve got a really complex system of vortices coming off your front flaps and it all works with your nose and with the diffuser and everything then you’re going to take a big hit, whereas if you’ve got something that’s less optimised you’re likely to take less of a hit when you change things a little bit. But despite that disadvantage we hope to get a net gain downforce-wise [but that’s] something I couldn’t possibly tell you.”

Has it changed the aero balance?
“The aero balance is… we all have the same targets. We’ll have very similar targets. We’ve got quite similar tyres, the rear construction’s a little bit new, and that seems to be working quite well so you know that will tend to make the car a little bit more stable so maybe you could afford to run a little bit more front aero balance but you’ll have essentially the same target. Unless there’s a large-scale change, make the front tyres a lot wider or thinner or rear tyres taller, or if the weight distribution changes by more than a couple of percent, then that drives you to run a different aero balance.

“And then you’ve got to go around the loop. When you’re in the tunnel you’ll have a target aero balance for all the upgrades you bring to the car. But if you have say weight distribution’s going to be five percent rearward next year then to balance that we would have to decide where we wanted to run the aero balance and we would try to do a ton of testing with that as a basis. This year we haven’t had any massive changes in car construction or architecture or anything so we wouldn’t expect to be a million miles from where we were last year.

Have you sacrificed top speed to gain downforce to please the drivers?
“I think the drivers are pleased when they win races and get podiums and if that means the car’s a little bit more difficult to drive then they would still rather have that than a car that’s comfortable but comes tenth.

“There’s a close correlation between how many points they get in the world championship and how happy they are, and top speed’s second order.”

One year ago you said you were 30% through your target work load because of setbacks. Where are you now?
“I think we’re in fairly good shape. The focus is slightly different this year. Obviously last year everyone was struggling with the new power units and how to use them and how to optimise the way you use them. Aero was very different. Just talking to the engines was quite difficult for most people.

“We’ve been able to do fairly well over the last three days, ticking off our winter list. The list never gets shorter, only ever gets bigger. But we’re in pretty good shape as far as that goes.”

Are the new skid blocks influencing your set-up?
“It’s not a major issue. It doesn’t change anything.”

How will you manage engine developments?
“There’s a lot of juggling. For example, and I’m not giving any secrets away, you’ll try to work out when to bring those developments along. One of the issues you’ve got, because it’s obviously a very long-life engine, is how to test it, and obviously we’re doing a lot of dyno work. But that’s not the same thing as getting in a car and hammering it around a circuit.

“We’ll be doing a lot of interpolation [sic], looking at a little graph like this and trying to work out what’s going to happen up here. And you build that up with experience so we’ll look at what we did last year and what happened as a result at race four, and we’ll just be doing it for race five this year.

Will there be situations where different drivers in the same team have got ‘the next bit’?
“Without a doubt. You’ll need it. And it was last year.”

“And it’s the same with everything: you have two rear wings of a certain type and one of the guys backs it into a barrier, maybe he’s going to have the mark one instead of the mark two.”

How much more efficient now are you than back in the ’90s when teams would test for 12 days straight?
“It would be better if we had all those test days, so we have to be – you’ll see, if you look back 20 years the reliability nowadays is massively better.

“And that’s a result of the professional attitude. Rather than guys scrapping about in garages and guesswork and sucking it and seeing, it’s a result of may, many clever people in the factory doing a lot of work.

“So that reduces the time that we have to use on the circuit to do one particular thing. We’ll try to roll up two or three things at the same time: do an engine test and an aero test at the same time rather than having an independent [test].

“People used to have three test teams, the guys that were associated with big manufacturers would have three test teams, one car would run tyres, one doing chassis and one would do the engine. Well, we haven’t got that option any more so we’ve got to get on with it. We used to do one or two weeks in Estoril and mechanics would be in tears, dying to get home.

“And no night shifts: night shift is an intelligent way to think your way around it. We’ve got 12 days’ testing before the start of the season, do I want half of my mechanics to be either asleep or full of coffee for four or five straight nights? No, we get a night shift, we get an engineer on the night shift, or a couple, we try to spread the workload.” How close is your current power unit hardware to what you’ll have at the end of Barcelona?
“The transmission is a Williams transmission. Most of the updates in terms of performance from now on will be either engine utilisation – so the ERS and how you use it, and things like brake-by-wire which is association with the ERS – or there’ll be aerodynamic. They’re the two big areas.

“The transmission, it’s a complex thing – not auto, obviously – but it’s a complex piece of engineering, that for most cars will be frozen because it’s one unknown you just want to nail. Where is the performance? Well it’s usually in the power unit, the ERS and putting more downforce on the car.”

So no plans to crash-test a new gearbox cases?
“I’ve no idea if other people have but it’s not on my horizon. Hopefully! Never say never.”

Last year there was a theory that the Mercedes works team had a heads-up on the layout of the power unit, exactly where everything was going to be, and they could thus optimise it. You guys found out a little bit later and were always catching up. Was that more or less true and do you know exactly where you’re starting from?
“No, we’ve got a pretty good relationship with Mercedes. I’m not aware of any issues like that.”