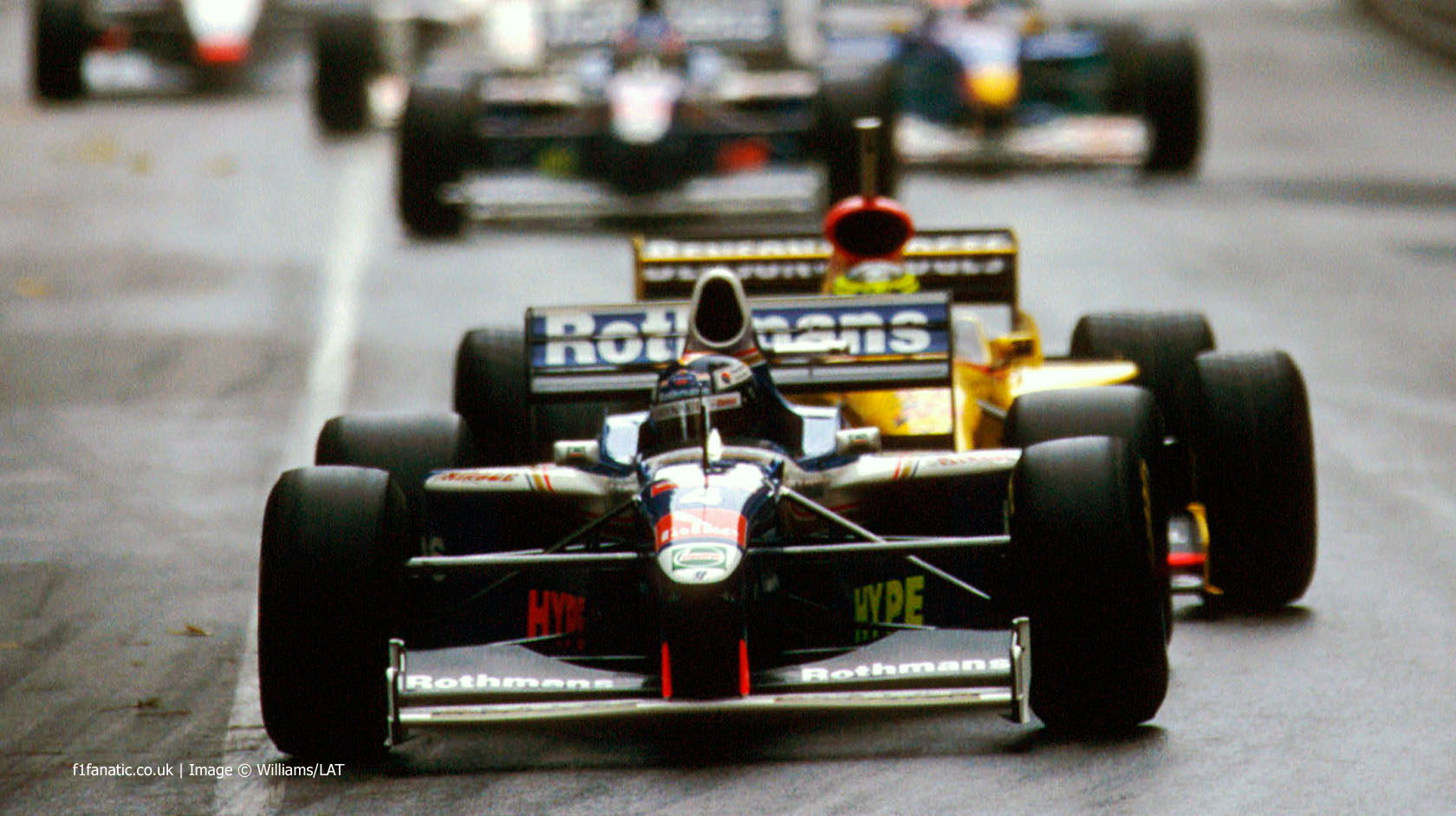 The prospect of F1 switching back to two-metre-wide cars of the type last seen in 1997 provoked a mixed response from readers last week.

One similar observation came up several times from those who expressed doubts about the plan: a concern that wider cars would be more difficult to overtake, and so we will see less exciting racing if the plan happens.

But the reality is probably a lot less straightforward than this, and there’s plenty of data which can give us some perspective on it. First of all, will how much harder will it be for drivers in wider cars to overtake each other?

As the current cars measure 1,800mm wide, if that is increased by 200mm then an extra 400mm of track width will be required when two cars go side-by-side. (For a rough comparison, the first image is of a 2,000mm wide car and the second shows a 1,800mm wide car, and both have the same front and rear wing widths).

Are the tracks wide enough to accommodate this extra width? Appendix O to the International Sporting Regulations specifies the requirements for circuits which hold Formula One races. Track designers get some leeway when it comes to width, particularly in the case of street circuits where brief sections may be very narrow (such as Singapore’s Andersen Bridge). However the recommended minimum track width is pretty generous:

The width of the starting grid should be at least 15m; this width must be maintained through to the exit of the first corner (as indicated by the racing line).
Appendix O to the International Sporting Code

In practice, tracks are often considerably wider than this, especially at key overtaking places. Bahrain’s grand prix circuit, for example, is up to 22 metres wide at points – enough to get 11 2m cars side-by-side (although they would all be touching). Even the new temporary street circuit at Sochi, used for the first time last year, is no narrower than 13 metres wide at any point.

The table below gives examples of minimum and maximum track widths at a range of F1 circuits, and shows how many cars of the two different widths can fit alongside each other in that space:

Older circuits tend to be narrower than new ones. Most of the latter were built since the narrow-track cars were introduced in 1998. However even comparatively cramped tracks such as Monza are still able to accommodate at least three two-metre-wide cars running side-by-side with a reasonable amount of space between them.

Monaco is the perennial exception when it comes to F1 track design. But realistically, we already see very little passing there with 1.8m wide cars, and it’s doubtful adding a few extra centimetres in width is going to make a considerable amount of difference.

For further proof of the possibility of racing with wider cars, consider that in 1997, when cars last measured two metres wide, F1 raced on the old Hockenheimring which is far narrower than most current circuits. Yet fabulous side-by-side (and DRS-free) racing was still possible:

It’s also worth remembering the rules on defensive driving are more clearly defined now than they were then, making it easier for a driver to make a pass.

But there are other, more subtle ways that having wider cars and the proposed wider tyres could influence the quality of racing and the difficulty of overtaking. It’s hard to make a clear-cut case for whether it would make life harder or easier for the drivers. The mooted widening of the rear tyres from 325mm to 400mm could have a very significant effect. The turbulent air produced by tyres is a major challenge for aerodynamicists. They would prefer to shroud the tyres in bodywork to reduce drag, but the rules forbid it.

Therefore a potential 23% increase in the width of the tyres would significantly increase the disturbed air coming off the back of an F1 car. As every racing fan knows this has both positive and negative effects when it comes to encouraging overtaking: a chasing car is robbed of downforce in a corner and therefore loses grip, whereas on a straight the car in front provides a slipstream effect which allows the pursuer to catch up.

Assuming the increase in car width extends to its wings and bodywork, designers would have greater scope to increase the amount of downforce a car produces. The FIA has been wary of allowing speeds to escalate in this way, however, so it should not be taken for granted that this would happen. And then there’s the question of what they might do with DRS.

While 2,000mm F1 cars will not be drastically more difficult to pass by dint of being wider, exactly what effect the move will have on the quality of the racing will depend on the detail of the regulations.

However it is likely that another major change in the car regulations would force costs up at a time when teams are already struggling. The question therefore becomes whether F1 can afford the change, whether the positives outweigh the negatives, and whether the aesthetic improvements will be appreciated by everyone. That is all up for debate.