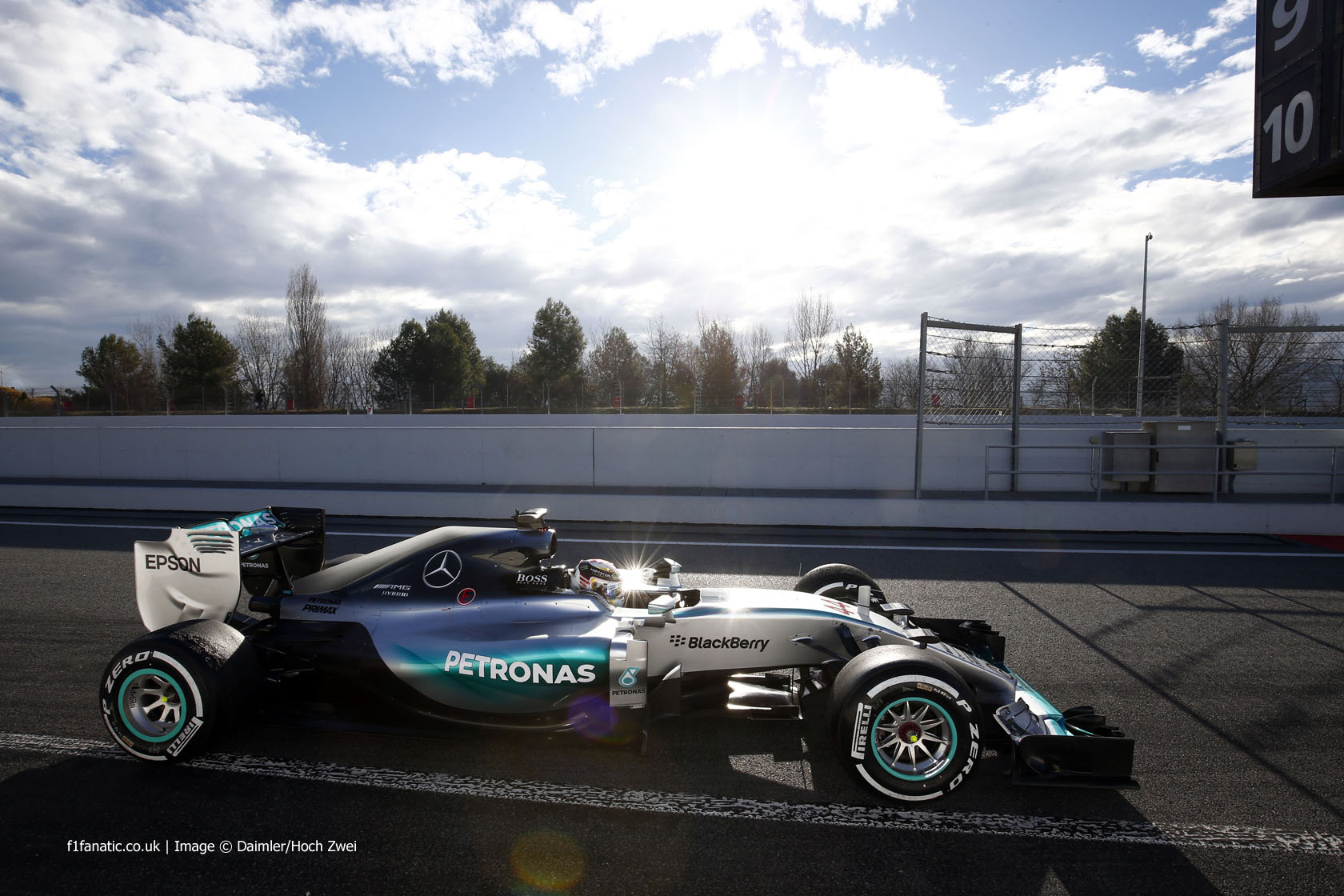 Mercedes’ rivals may be no closer to them in 2015 than they were last year as data from the final pre-season tests indicates they have a lap time advantage of around a second.

The W06 ran for longer than any other car as well in an impressive pre-season showing from the reigning champions.

Mercedes set the quickest lap time of the combined eight days of pre-season testing at the Circuit de Catalunya. What’s more, they did it using a tyre compound which was one stage harder than most other teams used to set their quickest time.

Fellow Mercedes power users Williams got closest to their time, lapping just under three-tenths of a second off Mercedes’ soft-tyre pace using the super-soft compound. Pirelli estimate the super-softs are 0.8 to 0.9 seconds per laps quicker than the soft tyres at this track, so a reasonable estimate puts the W06 at least a second quicker than anything else on the track.

Of course we don’t know the fuel loads being used by any of the teams. But as Mercedes were confident enough in their pace to use harder tyres than their rivals for their performance runs, it’s unlikely they were also using a significantly lighter car.

However there is some cause for encouragement: this track was the venue where Mercedes’ superiority was at its greatest last year. The W05 was 1.24% faster than any other car at the Circuit de Catalunya in 2014 but this was the only venue where its margin was greater than 0.95%.

Ferrari will draw some encouragement from being the next-quickest team after Williams – even if we assume Red Bull could have found the best part of a second by lapping on the super-soft tyres.

Sebastian Vettel expects a close battle behind the Mercedes cars. “From a performance point of view it’s clear that Mercedes is still ahead by quite a way,” he said, “but right behind there is us, Williams and Red Bull all very close”.

Pirelli also suggest the soft tyres are 1.2 to 1.4 seconds quicker than the medium compound at the Circuit de Catalunya. So while Rosberg’s best lap was two-and-a-half seconds quicker than last year’s pole position time by Hamilton on mediums, that probably equates to a performance gain of a little more than a second at the moment. Not only were Mercedes quick, they also ran reliably. The W06 covered more ground than any other car – over 6,000 kilometres.

Does this mean they have solved the reliability problems which plagued them last year? Not necessarily – the W05 also completed the most laps in pre-season testing last year, albeit amounting to less than 5,000 kilometres.

Force India may not have had their new car ready until the final test but the VJM08 has run very well since it appeared. The first chassis already has a whisker under 1,700 kilometres on the clock – little less than McLaren have managed in 12 days with their troublesome MP4-30.

46 comments on “Barcelona test data: Mercedes a second ahead”