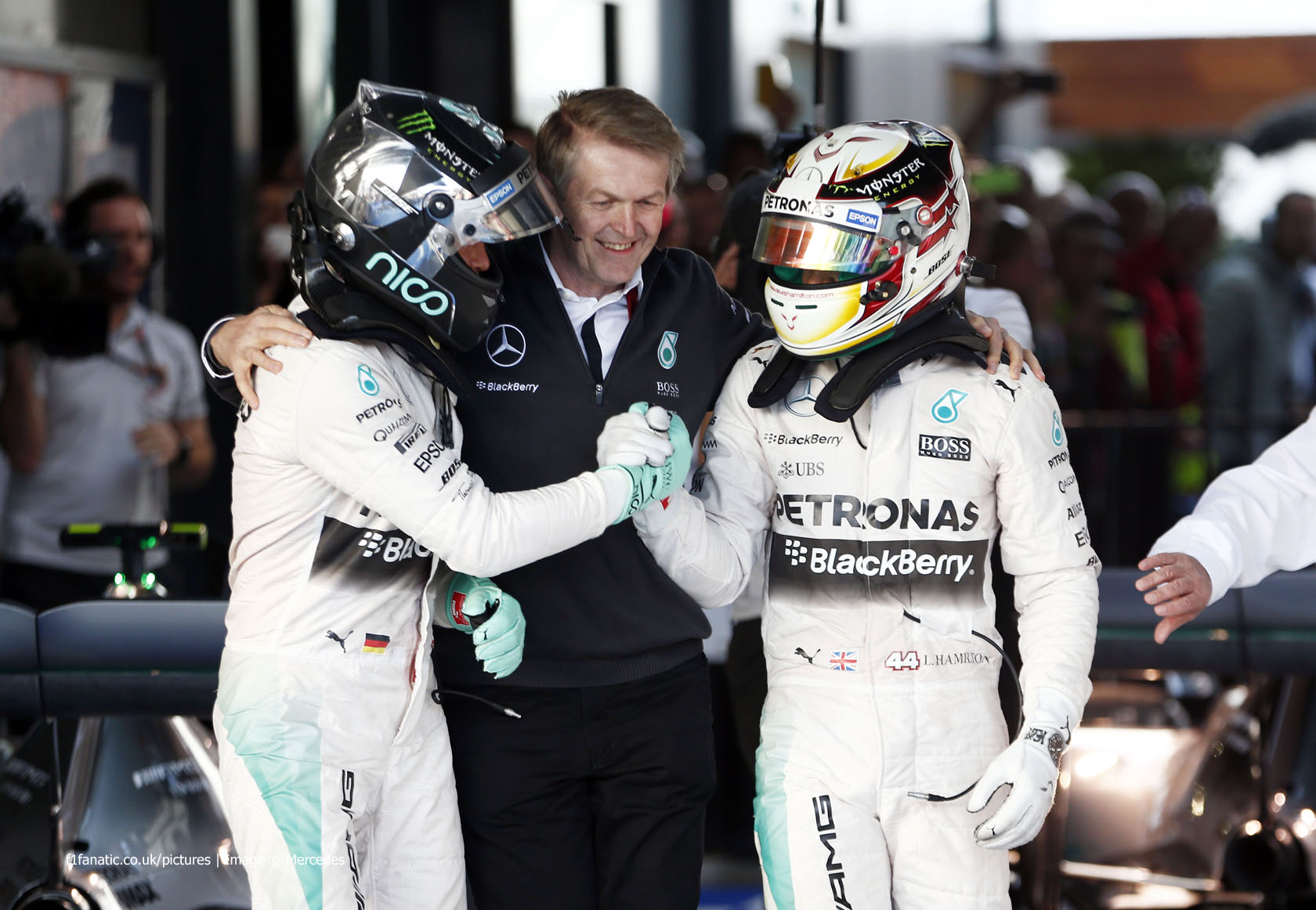 Mercedes pair Lewis Hamilton and Nico Rosberg began the new season with a one-two victory which looked as routine as any of the eleven such results they scored in 2014.

Just three of their rivals reached the end of the race without being lapped, and they reached the finish line over half a minute after the W06s had passed by. And what the opposition appeared to lack in quality was not made up for in quantity.

The first driver to drop out of the Australian Grand Prix was Fernando Alonso almost two weeks ago. He seemed to start a trend, for before the red lights had gone out on the first race of the season one-quarter of the entry had fallen by the wayside.

Neither of the Manor drivers made it out of the garage all weekend as the team’s 11th-hour rescue deal left it unable to finish building its cars in time for qualifying. The stewards were convinced they had made a serious effort, however, and they will try again in Malaysia.

As the final minutes of the off-season ticked down, three more drivers were struck from the grid. Valtteri Bottas had injured his back in qualifying and was ruled out following an inspection by the FIA. And two drivers never made it back to the grid after setting out from the garage in their cars: Kevin Magnussen’s Honda power unit failed and the gearbox packed up on Daniil Kvyat’s Red Bull. So the crowd which had earlier watched 25 of Australia’s spectacular V8 Supercars rumble towards the first corner now watched a dismal grid of just 15 F1 cars take the start of the Australian Grand Prix. Yet even this diminished field was unable to get around Melbourne’s tricky turn one without incident.

The trouble began with the Ferrari team mates. Kimi Raikkonen got away more cleanly than Sebastian Vettel, but Ferrari’s new hire held the inside line and edged his team mate wide.

“I think he had a better start for sure,” said Vettel, “I got a little bit back under braking and then I think I was side-by-side with him.”

I couldn’t make corner one as tight as I wanted to, which made him lose a couple of positions.” Raikkonen’s car went into anti-stall mode as he was hit by Carlos Sainz Jnr, and the Toro Rosso driver lost the left-hand end plate from his front wing.

Felipe Nasr’s Sauber tried to take advantage of their delay as Pastor Maldonado arrived on the scene. The pair connected and the Lotus snapped round and into a barrier.

That prompted the appearance of the Safety Car, and as it appeared the other Lotus headed for the pits. Romain Grosjean’s Mercedes engine was lacking power, and as Lotus called it a day the field was now down to just 13 runners.

Sainz slips back at restart

Despite reporting that his last practice start felt “under-engaged”, Hamilton’s proper start was smooth and he kept Rosberg at bay. However Daniel Ricciardo, seventh on the grid, was frustrated that his clean getaway was quickly spoiled by his Renault engine.

“Just drive-ability,” he reported on the radio. “Seemed like I got a decent launch then I had massive kicks. Otherwise it was looking alright.” At the restart he was seventh behind Nasr, but the pair immediately passed Sainz, whose car was slow when the race resumed because of a software problem.

Three laps later Sainz lost another place to Raikkonen. But the Ferrari driver’s race was about to be undone by his left-rear wheel nut. It became cross-threaded during his first pit stop on lap 16, costing him at least five seconds

Then when he came back in on lap 40 the nut failed to reattach, and though he was sent out of the pits Ferrari soon realised the problem and told him to park the car. The stewards later ruled they had complied with the tight safety rules around unsafe releases from the pit box – a relief for the team as they tend to carry heavy sanctions.

Vettel enjoyed more success at his first and only pit stop. Having sat on Massa’s tail since the restart, by staying out three laps longer than the Williams he was able to build up enough of a cushion to jump ahead, even as Williams urged Massa to put his foot down. It was a clear demonstration that, at this track at least, Ferrari had taken up the mantle of ‘best of the rest’ behind the Mercedes.

Ricciardo was hoping for similar help from his team as he stared at Nasr’s rear wing. “Let me know when we get a pit window,” he said on the radio, “can’t do anything about the Sauber”. But despite pitting two laps earlier than Nasr in a bid to undercut him, Ricciardo was unable to leapfrog the Ferrari-engined car. As per the familiar routine from last year, Hamilton kept Rosberg at arm’s length and was the first of the two Mercedes drivers to pit. Rosberg pushed hard in pursuit, brushing the turn 11 wall at one point, but every time he threatened to get within DRS range of his team mate, Hamilton opened the gap back up again.

Hamilton seemed more concerned about the state of his fuel consumption than what his team mate might throw at him, until word came from the pit wall that his dashboard display, which had been giving him worrying signs, was faulty.

Rosberg tried to save what fuel he could to make an attack only to be reminded that the FIA’s radio restrictions introduced last year prevented them from telling him how much fuel Hamilton had left.

“I put the question because I wanted to know exactly where Lewis was,” Rosberg explained afterwards, “but [race engineer Tony Ross] is not allowed to tell me, so I never got the answer. I hadn’t thought of that at the time – but obviously that was not good. Because I thought if I would know if he was down or something, that would be really motivating and it would be great.”

“All I could do is push flat-out and hope he had less,” Rosberg added. “Which wasn’t the case.”

It was a dispiriting race for Rosberg, who had set Mercedes’ quickest times in testing and carried that form into Friday practice in Australia. But when the serious business began, the world champion raised his game. This was Hamilton’s seventh win in eight races.

Behind them a rejuvenated Vettel thanked his new team with a smattering of Italian as he took the chequered flag. “Of course it’s not a victory but for us today it feels like a victory,” he said afterwards. Separately they had endured poor 2014 campaigns; together they got 2015 off to a better start than anyone besides Mercedes. “Obviously it’s a great relief after a horrible season last year to know that the car in general is working,” said Vettel. “I’ve secretly been a fan, now officially I can be a fan of Ferrari.”

The rookie contingent acquitted themselves well, especially Nasr, who came home an excellent fifth. Sainz was demoted by the other Sauber four laps from home but still took points for ninth place on his debut. His team mate Max Verstappen looked set for a strong end to the race following a long opening stint on the medium tyres, only to suffer another Renault power unit failure.

That left just 11 cars running at the end and the last of those was Jenson Button’s McLaren. This was something of a surprise – not that the car was last, that had seemed likely after qualifying – but that it had kept running until the end, or at least two laps shy of it.

“This is a very good step forward,” enthused Button on the radio, having lopped almost a full second off his best lap time on the final tour. “Very, very happy with what we’ve achieved here today.”

Even so, every team on the grid will need a few more ‘good steps forward’ to bring Mercedes in range.