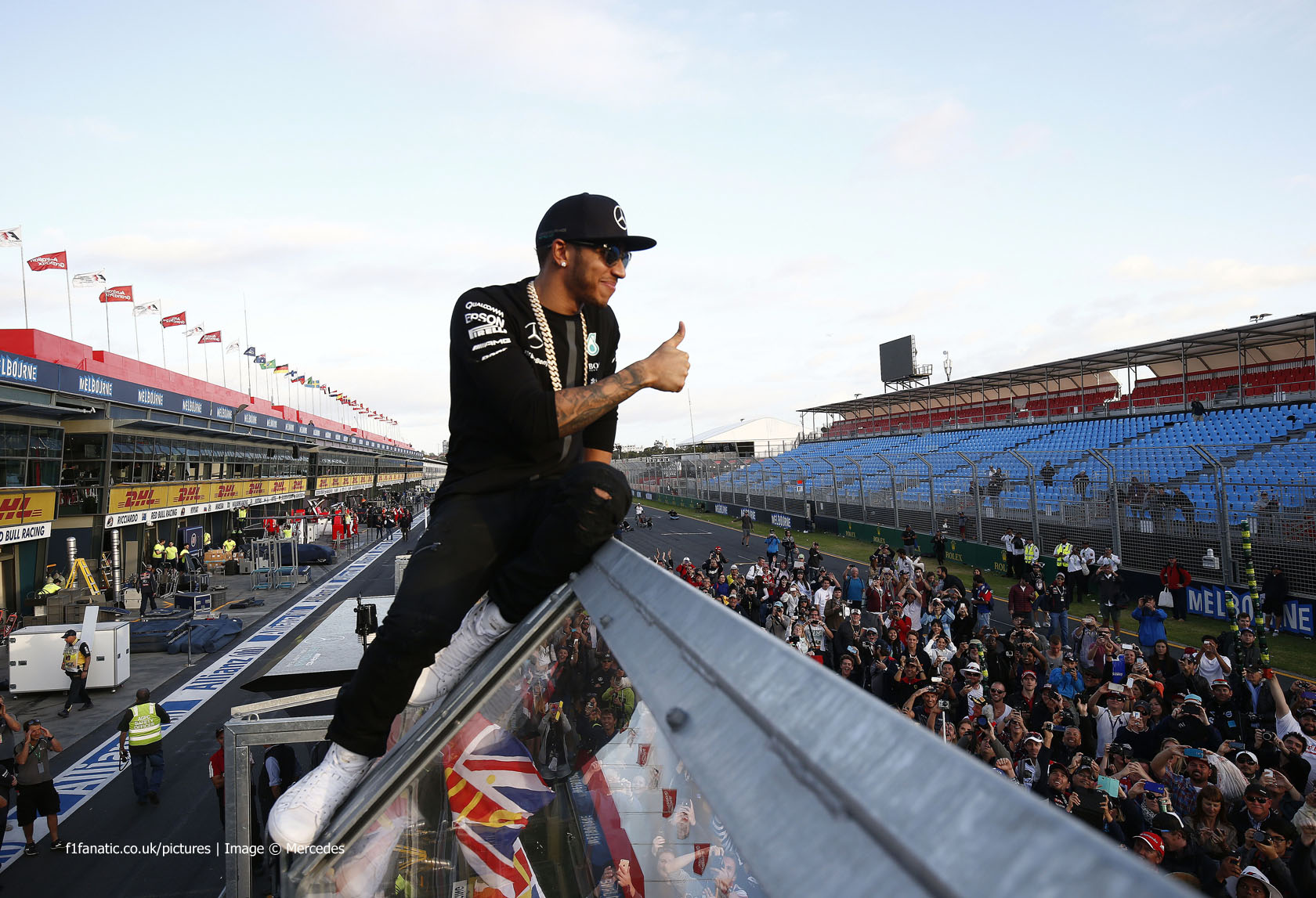 Lewis Hamilton took his 34th F1 win in the Australian Grand Prix and now looks likely to surpass Sebastian Vettel as the most successful active driver later this year.

Vettel hasn’t added to his total of 39 wins since the end of 2013. Hamilton has won 12 races in that time, and the stunning pace Mercedes demonstrated yesterday gave every indication he will enjoy a similarly rewarding 2015.

And if this year is as good as last year was for Hamilton he could even overtake his F1 hero Ayrton Senna as the third most successful driver of all time in terms of wins. Senna scored 41 Formula One victories.

Hamilton is making similar inroads on Vettel in the all-time pole positions table. He started at the sharp end for the 39th time this weekend, and Vettel has 45 pole positions.

For the sixth time in his career, Hamilton scored a ‘hat trick’ of win, pole position and fastest lap. The latter was his 21st, putting him level with Fernando Alonso and Gerhard Berger.

Hamilton has decided against using the number one on his car which is reserved for a world champions, making this the first race since the 1994 Australian Grand Prix not to feature a car carrying the number one. For the second year in a row no one has chosen to be number two, and not since the Monaco Grand Prix in 1994 have both those numbers been missing from an F1 grid.

There was some good news for Vettel, however, as he finished on the podium in his first race for Ferrari. Both his new team mate Kimi Raikkonen and predecessor Fernando Alonso won on their Ferrari debuts – the latter after Vettel’s car failed while leading in Bahrain – but under the circumstances it’s unlikely Vettel was ever going to beat either of the W06s.

This was the 30th win for Mercedes, 20th consecutive podium appearance and also their 40th points score in a row. Williams were in the points for the 20th race running.

Three drivers claimed the first points of their career in the race, and two of those were rookies. Felipe Nasr brought his Sauber home in fifth place – the best result ever for a Brazilian driver on his debut. The following are those which finished in the top ten plus some of Brazil’s most significant drivers:

And while he didn’t score a point, at 17 years and 170 days old Max Verstappen became the youngest driver to start an F1 race, beating the previous record by almost two years.

Having failed to score at all in 2014, fifth and eighth for Sauber was their best two-car finish since Nico Hulkenberg and Esteban Gutierrez came in sixth and seventh in Japan two years ago.

However it was a difficult start for the revived McLaren-Honda partnership. Starting their first race together since 1992 – which coincidentally was also in Australia – Jenson Button and Kevin Magnussen could manage no higher than 16th and 17th on the grid. This was McLaren’s worst combined qualifying performance since the 2012 Spanish Grand Prix, where Button started tenth and Hamilton 24th after being excluded from qualifying. By any standards, F1 showed up with a small field in Australia. But this can be measured in different ways.

There were 20 entries admitted, 17 of them qualified (excluding Valtteri Bottas who withdrew and was removed from the official grid) and 15 actually started the race. Not since 1966 has F1 had as few as 17 cars on the grid for the first race of the year, and you have to go back to 1958 to find a season that started with 15 or fewer. The latter was the smallest field ever seen for the opening race of a season – just ten cars made it to Argentina for that year’s curtain-raiser.

In terms of races other than the first event of the year, it’s ten years since F1 had a race with fewer than 15 starters. This, of course, was the notorious United States Grand Prix at Indianapolis where just six cars took the start after the fourteen Michelin runners pulled into the pits at the end of the formation lap due to tyre safety concerns.

The last time F1 had fewer than 17 cars on the official grid was the 1982 San Marino Grand Prix, where a boycott by several of the top teams meant just 14 cars turned up, and two of those failed to take the start.

When the chequered flag came down just eleven cars were classified, the smallest number since the 2008 Australian Grand Prix, where eight drivers were classified and only six were still running at the end.

Have you spotted any other interesting stats and facts from the Australian Grand Prix? Share them in the comments.