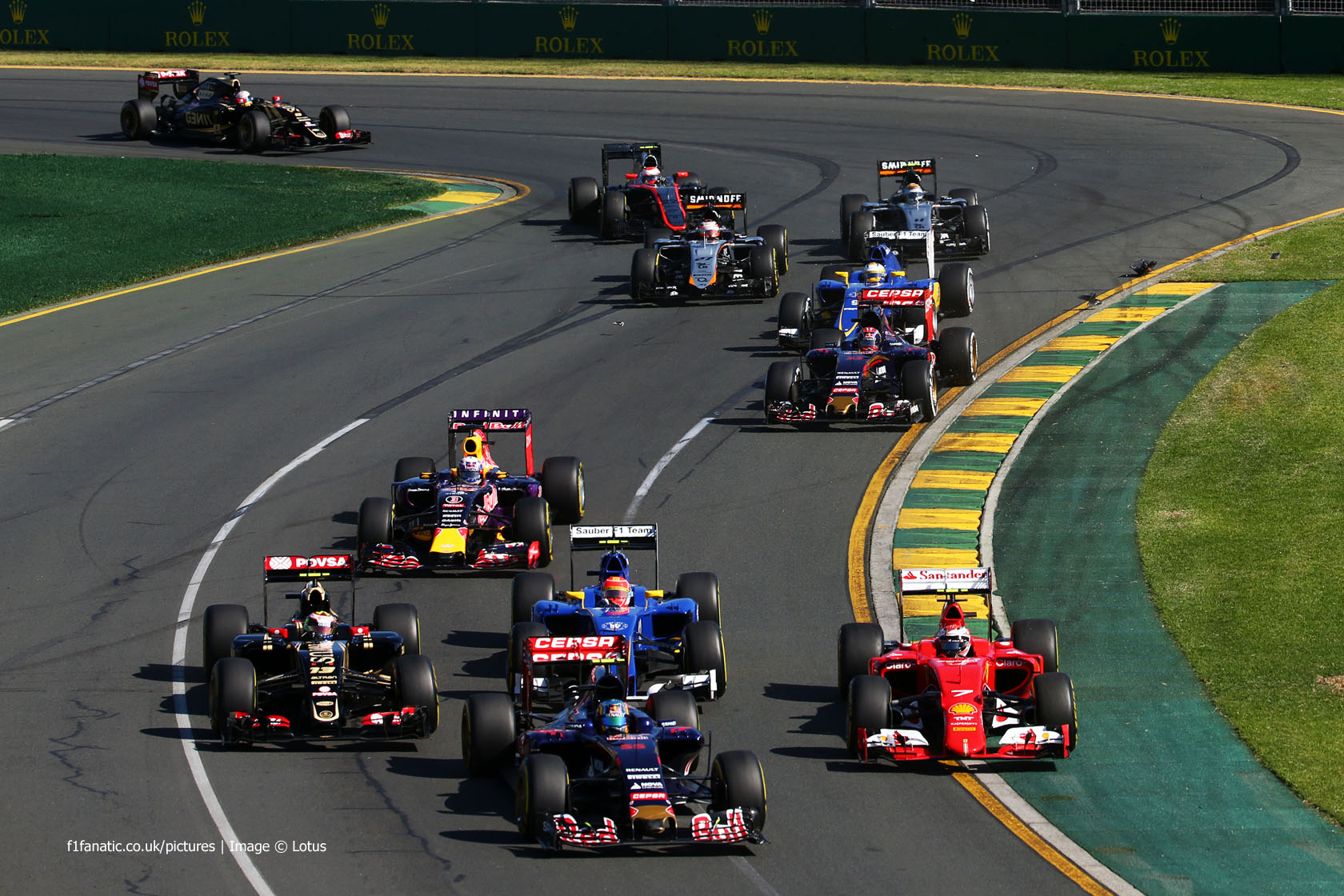 Which F1 driver was the best performer during the Australian Grand Prix weekend? Lewis Hamilton – All weekend long Hamilton seemed to have a couple of tenths of a second in hand over Rosberg in the first sector. His first run in Q3 was good enough to take pole position by almost half a second, but he lowered his time on his second run anyway. A clean start and smooth restart meant he was untroubled by Rosberg at the start of the race, and despite misleading messages from his duel read-out he kept Rosberg back in the second stint.

Nico Rosberg – Having led the way on Friday Rosberg seemed to be put off his stride by a gearbox problem in final practice, then suffered a few hiccups in qualifying and ended up well off Hamilton’s time. It wasn’t representative of the gap between them, but if the Mercedes wasn’t so much faster than anything else it would have been more of a problem. The gap between them in the race was never that large, but whenever Rosberg tested Hamilton a response came immediately, confining him to second.

Daniel Ricciardo – The trademark grin was seriously tested by Red Bull’s persistent problems with a Renault engine that lacks both reliability and drive-ability. The former meant he only managed 19 laps before qualifying, and the latter was a persistent aggravation, particularly when it spoiled an otherwise good start to the race. Under the circumstances he did well to qualify sixth, but the fact he finished behind a Sauber shows Renault have a lot of work to do. Daniil Kvyat – Wasn’t able to accompany his team mate into Q3, and then failed to start the race at all following a gearbox problem on his first lap. A disappointing start to his first grand prix for Red Bull.

Felipe Massa – Close to his team mate’s pace in practice but didn’t look like out-qualifying the other car until Bottas suffered his back problem. Massa pipped both Ferrari drivers to third, albeit a daunting second and a half off the Mercedes. He didn’t have the pace to keep Vettel behind in the race, but brought the sole remaining Williams home in a useful fourth.

Valtteri Bottas – If anyone was going to get within a second of the Mercedes drivers in qualifying Bottas was probably the most likely to do so. Unfortunately he began suffering back pain in qualifying which later turned out to be “a very small tear in the annular part of a disc in his lower back”. That ruled him out of the race, though he hopes to be back for Malaysia. Sebastian Vettel – Vettel’s first race for Ferrari went about as well as he could have hoped. After chiding himself for not taking third place on the grid when it was in the offing, he took it off Massa in the race by pitting three laps later than the Williams and dropping his lap time by around eight-tenths of a second despite the age of his tyres.

Kimi Raikkonen – Narrowly out-qualified by Vettel, Raikkonen was squeezed by his team mate in the first corner, then hit from behind by Sainz. That knocked the car into anti-stall mode and dropped him back to eighth. He later passed Sainz but a slow first pit stop dropped him further back, and more problems at the second stop forced him out. A luckless start to 2015, but there was much comfort to be drawn from his and the team’s promising performance.

Kevin Magnussen – One way or another Alonso’s McLaren was destined not to start this race. In Magnussen’s hands it qualified last, then broke down on its way to the grid.

Jenson Button – Got within a five-hundredths of a second of Ericsson’s Sauber in qualifying. Using conservative engine settings he got the McLaren to the end of the race, and even managed a brief scrap with Perez. He found quite a bit more pace on his final lap too.

Nico Hulkenberg – Won the qualifying battle at Force India by one-thousandth of a second, but with the VJM08 still early in its development Q3 seemed out of reach. Rose unobtrusively to seventh with an error-free race. “At this stage in the season it is important to capitalise on any opportunity,” he said, adding he expects the team to be more competitive in Malaysia.

Sergio Perez – Interestingly, when the FIA discovered Perez had overtaken Ericsson under the Safety Car they chose to tell him to hand the position back instead of dishing out a penalty as they did to Heikki Kovalainen in similar circumstances three years ago. He had to let Button past while doing that, and later spun while trying to pass the McLaren. He got past in the end, however, and collected the final point. Max Verstappen – Lost most of the second practice session due to a battery problem, but going into qualifying it was nip-and-tuck between him and Sainz for who would be quickest. A mistake at turn four on his last lap in Q2 kept Verstappen from reaching the top ten. In the race he ran as high as fifth during a long first stint on medium tyres, but the possibility of scoring points died along with his engine following his pit stop.

Carlos Sainz Jnr – Qualified an excellent seventh but after making a good start he clipped Raikkonen, damaging his front wing. A disastrous pit stop then cost him half a minute and dropped him out of contention for the upper points places, and with four laps to go Ericsson demoted him to ninth. Nonetheless, he scored points on his debut.

Romain Grosjean – Was quick in the new Lotus when it ran, but lost most of the first practice session and retired at the end of lap one in the race with a power unit problem.

Pastor Maldonado – Had he given Nasr’s Sauber a little more room in turn two, a top five finish would have been possible. “It’s disappointing because it was a great chance for us to have a great race,” he said. Marcus Ericsson – Took the first points of his career on a difficult weekend for Sauber as neither driver was able to run in first practice due to their ongoing legal problems. However he was unhappy with his car’s braking and consequently rarely looked like the more experienced Sauber driver. It was Ericsson who failed to get through Q1, and at the end of the race he was over a minute behind Nasr.

Felipe Nasr – Given that he hadn’t driven around the Albert Park circuit before, that Sauber don’t have a simulator for him to use and the team didn’t run in first practice, Nasr did a first-rate job to get his car into Q3 and bring it home in fifth place. He navigated the turn one trouble spot well and withstood race-long pressure from Ricciardo.

Neither Will Stevens nor Roberto Merhi were able to run as Manor failed to complete their cars on time.

Vote for the best driver of the Australian Grand Prix weekend