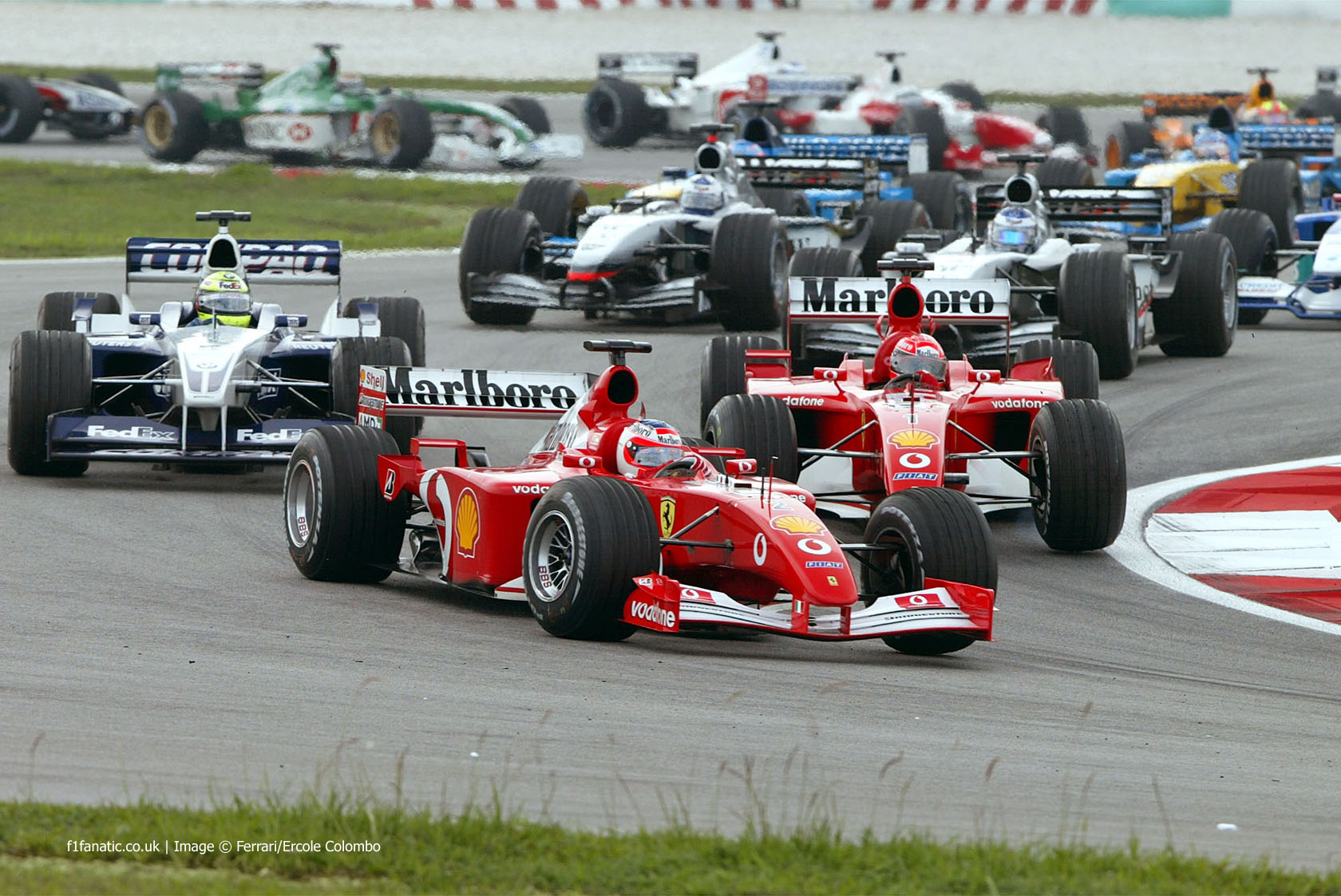 The wide but tightening first corners at Sepang have seen several incident-packed starts to the Malaysian Grand Prix. Here’s a look back on some of the most memorable. Juan Pablo Montoya and Michael Schumacher duked it out at the start in 2002. The pair tangled in turn one which delayed Montoya and left Schumacher with a broken front wing (see below). Controversially, the stewards also handed Montoya a penalty. Nonetheless he recovered to finish second between the two Schumachers, with victory going to the Williams of Ralf. For the second year in a row Schumacher tangled with a rival at the start – this time it was Jarno Trulli at turn two.

Fernando Alonso had set a new record as the youngest ever pole sitter and led the pack to turn one but it was Kimi Raikkonen who emerged from the pack to claim his first F1 victory. Alonso and Trulli shared the front row again in 2005 – though by this time Trulli was in a Toyota. They finished in the same order, albeit 24 seconds apart. While Fisichella’s Renault started from pole position Alonso’s was fuelled too heavily in qualifying, leaving him seventh on the grid. But a superb start saw him squeeze between the McLarens of Raikkonen and Montoya then sweep around the battling Williams duo Nico Rosberg and Mark Webber to hold third. Later in the race he jumped Jenson Button’s Honda to finish second behind Fisichella. It was an all-Ferrari fight at the front in 2008. Raikkonen got down the inside of pole sitter Felipe Massa at the start but gave best to his team mate as they braked for turn one. Raikkonen ultimately prevailed however – Massa spun off while chasing his team mate.

Trulli was squeezed between the two BMWs at the first corner and edged Nick Heidfeld wide, which left him vulnerable to a gutsy attack from Lewis Hamilton at turn four.

Button’s Brawn and Trulli’s Toyota shared the front row but it was Rosberg who burst through from fourth on the grid to take the lead for Williams. It didn’t last, however – Button won a race which was stopped 25 laps short of distance due to heavy rain and darkening skies. Robert Kubica’s BMW was left on the line.

Webber took a superb pole position by gambling on intermediate tyres on a wet track but lost his advantage to Sebastian Vettel at the start, which set the shape of Red Bull’s eventual one-two finish.

Sebastian Vettel ensured a second consecutive Malaysian Grand Prix victory by defending hard from Hamilton at the start – so much so that Heidfeld’s Renault swept past the McLaren into second place. Heidfeld eventually dropped to third behind Button in the other McLaren. A decisive skirmish early in the 2013 championship campaign: Alonso tagged the back of Vettel’s car at the start, and on lap two skated into retirement when his damaged front wing broke off. Vettel won the race following a controversial run-in with his team mate. Vettel was beaten to pole position by Hamilton last year – the pair separated by just five-hundredths of a second. But at the start the second Mercedes quickly pierced Vettel’s defences, leaving him to finish third behind the dominant W05s.