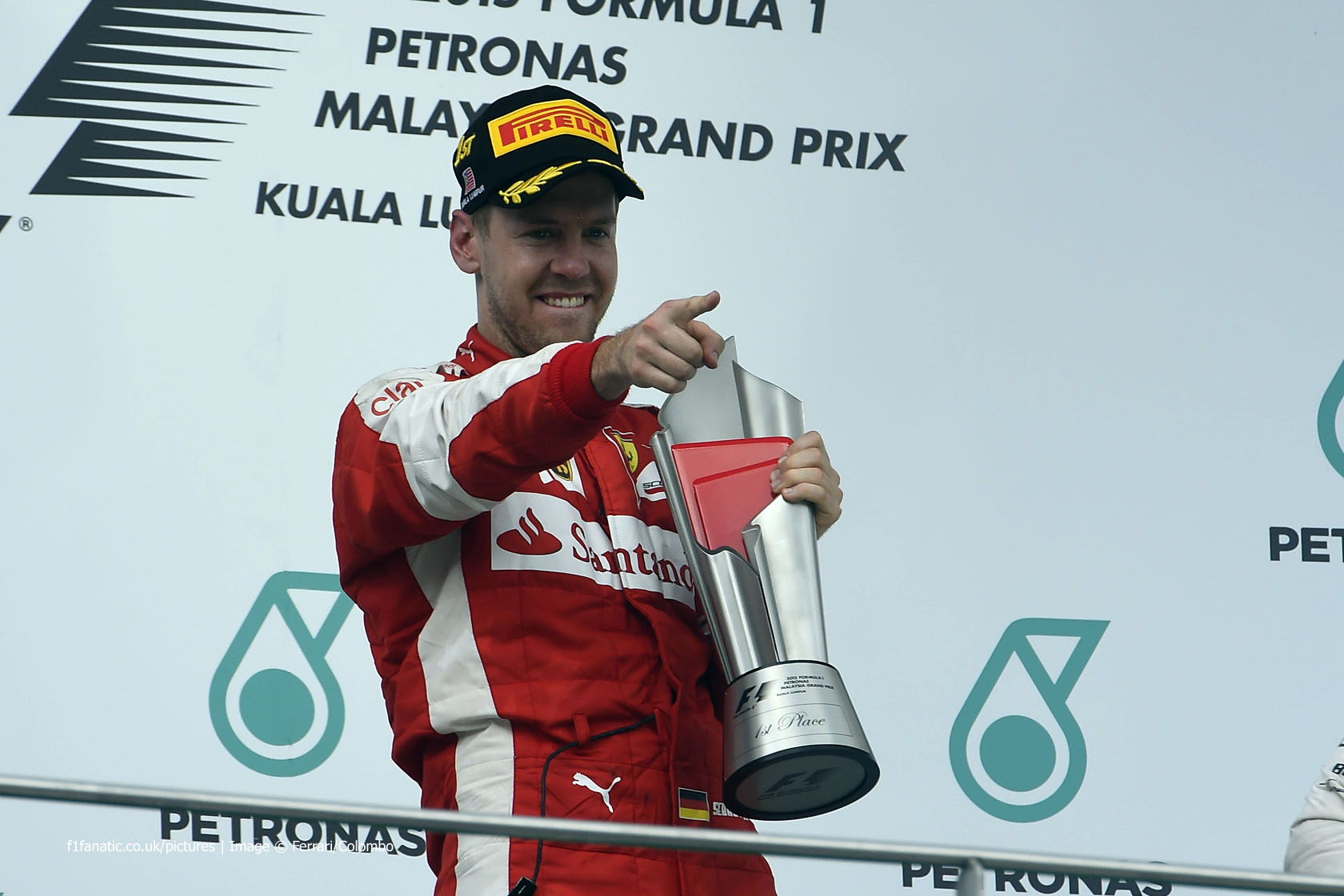 In the run-up to the Malaysian Grand Prix Bernie Ecclestone let it be known he considers Lewis Hamilton a superior champion to Sebastian Vettel when it comes to being an ambassador for Formula One.

It’s not hard to see why Hamilton – with his red carpet lifestyle and on-again, off-again, can’t-remember-which-again pop-star partner – attracts more attention to F1 than Vettel, who keeps his public profile low and steers his young family away from the media’s gaze.

But you don’t get to be champion in the first place if you can’t get the business done on track. And in today’s race Vettel put in a performance which eclipsed the memory of his win-less 2014 campaign, and wrote the first page of what could be a very successful new chapter of his career. Sepang is often hot and this year it was extremely hot. Track temperatures nudging 60C were the norm for most of the weekend, and this had a lot to do with why Mercedes’ shocking 1.391-second margin of superiority in Melbourne was not repeated at round two.

On Friday it was clear they were not treating their tyres as well in the heat as Ferrari were. Hamilton, who missed much of the day’s running with a power unit problem, was not just playing the ‘managing expectations’ game when he said the red cars “looked great” on the Sepang circuit.

Some 48 hours later, the absorbing question left after the Malaysian Grand Prix is whether Ferrari’s heatproof race pace would have propelled them to victory even if Mercedes had played their strategic cards to perfection – something they failed to do.

The start of the race was almost an action replay of the previous year. Hamilton led Vettel and Rosberg on the grid, and when the lights went out Vettel squeezed the second Mercedes to the pit wall. But while last year Vettel was beaten to turn one by Rosberg, this time it was a different story. With a net gain of 17kph beneath his right foot compared to the Mercedes, Vettel held Rosberg off, though they came perilously close to touching in turn one.

Within a few laps of the start Marcus Ericsson’s race was over as he spun into the gravel at turn one, bringing out the Safety Car. This proved a decisive moment in the fight for victory, but in the few laps of action before it Hamilton did not leave Vettel behind. Rather, as lap three began Vettel was within DRS range of the race leader.

Ferrari get it right

Even before arriving in Malaysia, Ferrari expected to push the silver cars harder this weekend. “Let’s assume for a minute that Mercedes don’t make mistakes,” technical director James Allison said.

“We think we can be a fair bit closer to them than we were in Melbourne if we get everything right.” When the Safety Car came out, Ferrari certainly called it right.

The Mercedes drivers headed for the pit lane, and Vettel gratefully inherited the lead. As the field queued up behind Bernd Maylander’s Mercedes AMG GT S Vettel was pleased to see four other drivers had stayed out, giving him a useful buffer to Hamilton.

Rosberg had to queue behind Hamilton in the pits and lost over seven seconds more than his team mate. So when the race restarted on lap Vettel led the yet-to-stop Nico Hulkenberg, Romain Grosjean, Carlos Sainz Jnr and Sergio Perez followed by the first of those who had pitted: Hamilton, Daniel Ricciardo, Felipe Massa and then Rosberg.

The Mercedes drivers did not progress as quickly as might have been expected. The team planned a three-stop strategy from the start but their first stop had been very early and tyre management was be needed to ensure they made it to the end. Nonetheless by lap ten Hamilton was back in second and four laps later Rosberg was up to third.

But even once in clean air the Mercedes drivers made little in the way of inroads into Vettel’s lead. He hit the pit lane for the first time on lap 18, taking a second set of medium tyres, and having fallen behind the two W06s Vettel quickly set about demolishing the gap to them.

Lap 21 therefore produced the unusual sight of a healthy Mercedes being passed with ease by a Ferrari. Vettel took second place off Rosberg, and three laps later he was in the process of doing the same to Hamilton when the erstwhile race leader dived into the pits.

If at this point Hamilton had been able to count on using two sets of the medium compound tyres to get him to the end of the race, we could have seen him bearing down on Vettel in an exciting finale.

But Mercedes hadn’t expected to want the softer tyres in the race, and so had used a set in Q1. Hamilton was not impressed when he was told there were no fresh medium tyres available for his last stint, and his ire rose further as he ticked off his race engineer for talking to him mid-corner, and confusingly overhead another radio conversation which was not meant for him. Underlining Ferrari’s pace, Kimi Raikkonen recovered from a miserable start to the race to finish fourth. He had missed the cut for the top ten in qualifying amid the one-lap frenzy that was Q2, and in a repeat of last year’s race was tagged from behind by a rookie on lap one and suffered a puncture.

Last year the culprit was Kevin Magnussen, this time Felipe Nasr was to blame. The Sauber driver dropped out of contention with a broken front wing, but despite taking the chequered flag in 12th place set the fourth-quickest lap of the day.

The echoes of last year’s race continued in the all-Williams battle for fifth. Last year Massa gave short shrift to his team’s order to let Valtteri Bottas pass him. This time Bottas took matters into his own hands, brilliantly passing Massa around the outside of turn six, just as he had done earlier in the race with Max Verstappen’s Toro Rosso.

Verstappen was the next driver home having also passed his team mate late in the race. The 17-year-old became the youngest driver ever to score points in F1 by doing so, and did it despite mowing the grass on his way into the pits at one stage.

Red Bull suffered even more from the heat than Mercedes did. Both cars struggled with high brake temperatures and clouds of carbon fibre dust began to appear from their front wheels in the big stopping zones. Daniel Ricciardo picked up front wing damage on the first lap which deteriorated as the race went on: from fourth on the grid he was tenth at the finishing line. New team mate Daniil Kvyat beat him home despite being tipped into a spin by Nico Hulkenberg’s Force India at turn two. The stewards’ decision to hand Hulkenberg a ten-second penalty for the contact seemed severe.

The other Force India driver was also penalised – and there was no room for dispute about that incident. While Hulkenberg left Kvyat ample space as the Red Bull passed, Perez simply ran into the side of Grosjean’s Lotus in the middle of the high-speed turn 12. At least Force India can take consolation from the fact both cars finished despite their front suspension taking significant impacts.

The McLarens had run with the Force Indias earlier in the race but both dropped out before the flag with power unit-related problems. Roberto Merhi, however, took the chequered flag in Manor’s first start of the season – then jumped on a plane to the Motorland Aragon in Spain where he will test his Formula Renault 3.5 car tomorrow. By the end of the race Hamilton’s rate of progress to Vettel had almost flatlined. The contest for the lead may have fizzled out, but there were few lulls in the action behind them.

This was a badly-needed tonic for F1 after a lifeless start to the season in Melbourne. After Australia Christian Horner had urged the FIA to forcibly level the playing field. Ecclestone had reached for a microphone and declared F1 needed all manner of gimmicks – reverse grid races, sprinkler systems and – most bafflingly – the return of last year’s hated double points.

The Malaysian Grand Prix was a reassuring reminder that not all is wrong in the world of F1. “Always it seems that when people are making the most noise about changing the rules, Formula One delivers,” Toto Wolff remarked – a magnanimous verdict given the humiliating defeat the world champions had just suffered.

On this day, in this heat, Mercedes and Hamilton had a real competitor in the shape of Ferrari and Vettel – which bodes well for the year ahead.