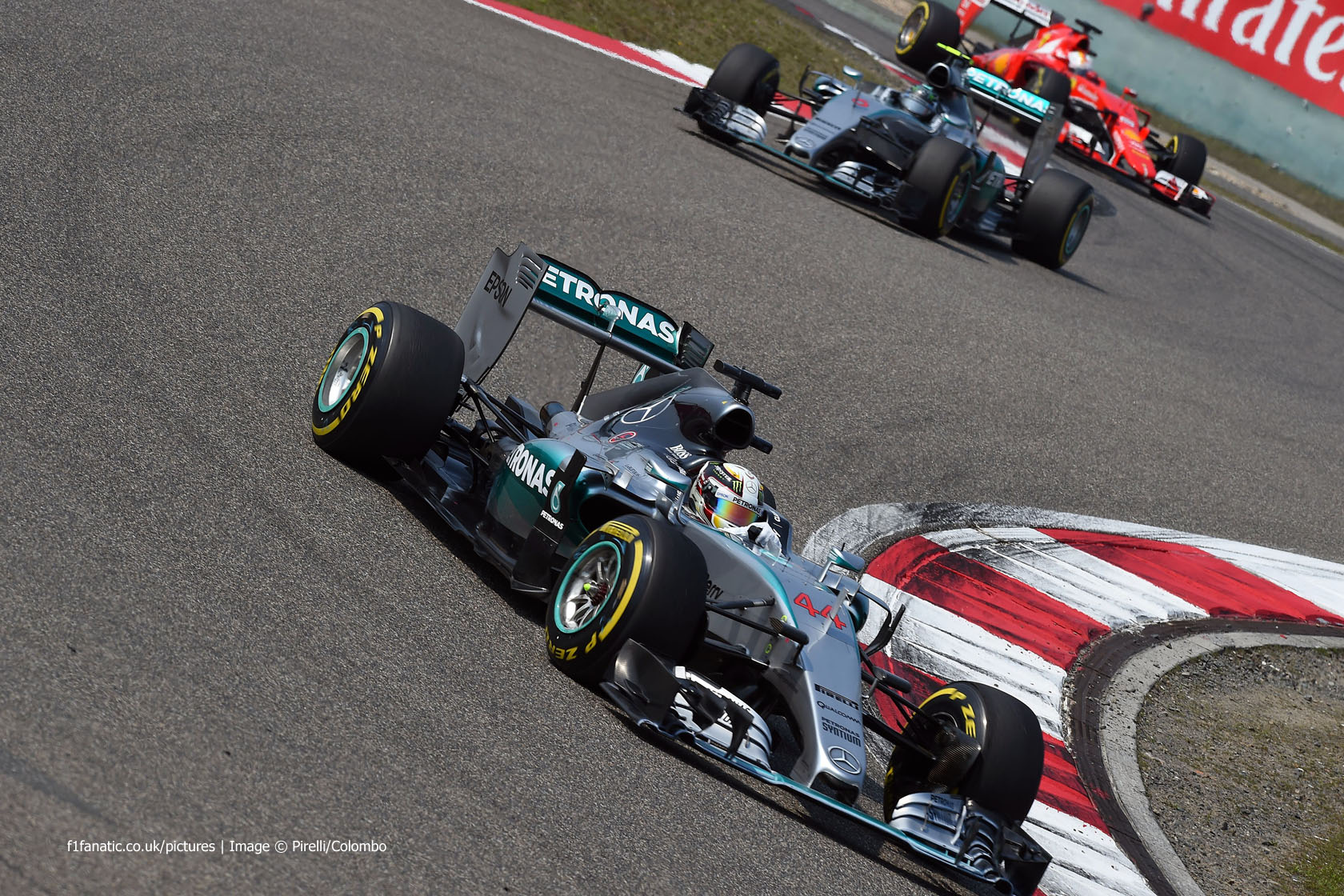 Lewis Hamilton dominated the Chinese Grand Prix to take his second win of the season and his fourth career victory in Shanghai.

It was another Mercedes one-two with Nico Rosberg taking second, but there were suggestions of renewed tension between the team mates after Rosberg

Ferrari kept the Mercedes duo under moderate pressure throughout the race in third and fourth, but Sebastian Vettel and Kimi Raikkonen were unable to mount a serious challenge on the Silver Arrows for the lead.

At the start, Hamilton arrived into the long first corner with his lead intact, followed by Rosberg close behind as the two Ferraris and two Williams jostled for position.

Valtteri Bottas was able to pass his team mate Felipe Massa at Turn One, but was forced to surrender the position back after Kimi Raikkonen performed a daring late-braking move into Turn Three.

With the front four all on the same tyre strategy, the Mercedes quickly began to control the pace at the front but both Sebastian Vettel in third and Raikkonen in fourth remained in reach of their rivals.

After both Mercedes and Ferraris had pitted for another set of Soft tyres, Rosberg began to eat into his team mate’s lead.

Nico Hulkenberg became the first retirement of the afternoon with gearbox problems, before Daniil Kvyat’s Renault engine provided greater spectacle for the second.

Carlos Sainz Jr suffered a very early spin in the Toro Rosso and later slowed to a crawl complaining of gearbox problems, before resuming at full speed moments later.

Despite being just over two seconds adrift of Hamilton, Rosberg was heard on team radio complaining about the leader’s pace and encouraging his team to hurry the world champion up after concerns over his tyres should he have gotten any closer to his team mate.

Hamilton responded by upping his pace and at the second round of pit stops the leading four cars took the same approach as each other once more with both Mercedes and Ferrari opting for Medium tyres for the final stint.

Having upped his pace significantly just before the final stops, Hamilton resumed comfortably in the lead. For the rest of the race, Rosberg was unable to close the gap to his team mate to within four seconds.

Further back, Pastor Maldonado was dicing with Jenson Button for 13th after the Lotus driver had dropped out of the points following two unforced offs.

A misjudged DRS pass attempt by Button saw the two make contact into Turn One, ultimately putting Maldonado out of the race and earning Button his first ever penalty points.

With just a handful of laps left, Max Verstappen’s day ended agonisingly close to a points finish when his Toro Rosso ground to a halt on the start/finish straight.

It was a sad end to a great day for the 17-year-old who had performed an array of impressive overtakes throughout the race during a climb to eighth place before a second mechanical retirement in his first three races.

With Verstappen’s stricken Toro Rosso along the pit wall, the Safety Car was deployed – effectively ending the race.

Hamilton cruised around to secure his second win of the season, ahead of team mate Rosberg and Sebastian Vettel’s Ferrari – meaning the first three podiums of the year have been made up of the same three drivers.

Raikkonen took fourth for Ferrari, with the two Williams of Felipe Massa and Valtteri Bottas fifth and sixth. Romain Grosjean secured Lotus’ first points of the season with seventh, while the two Saubers were split by the Red Bull of Daniel Ricciardo to round out the points.

Manor managed to successfully bring two cars to the end of a race, with Will Stevens and Roberto Merhi both finishing two laps down.

38 comments on “Hamilton holds off Rosberg for victory in China”