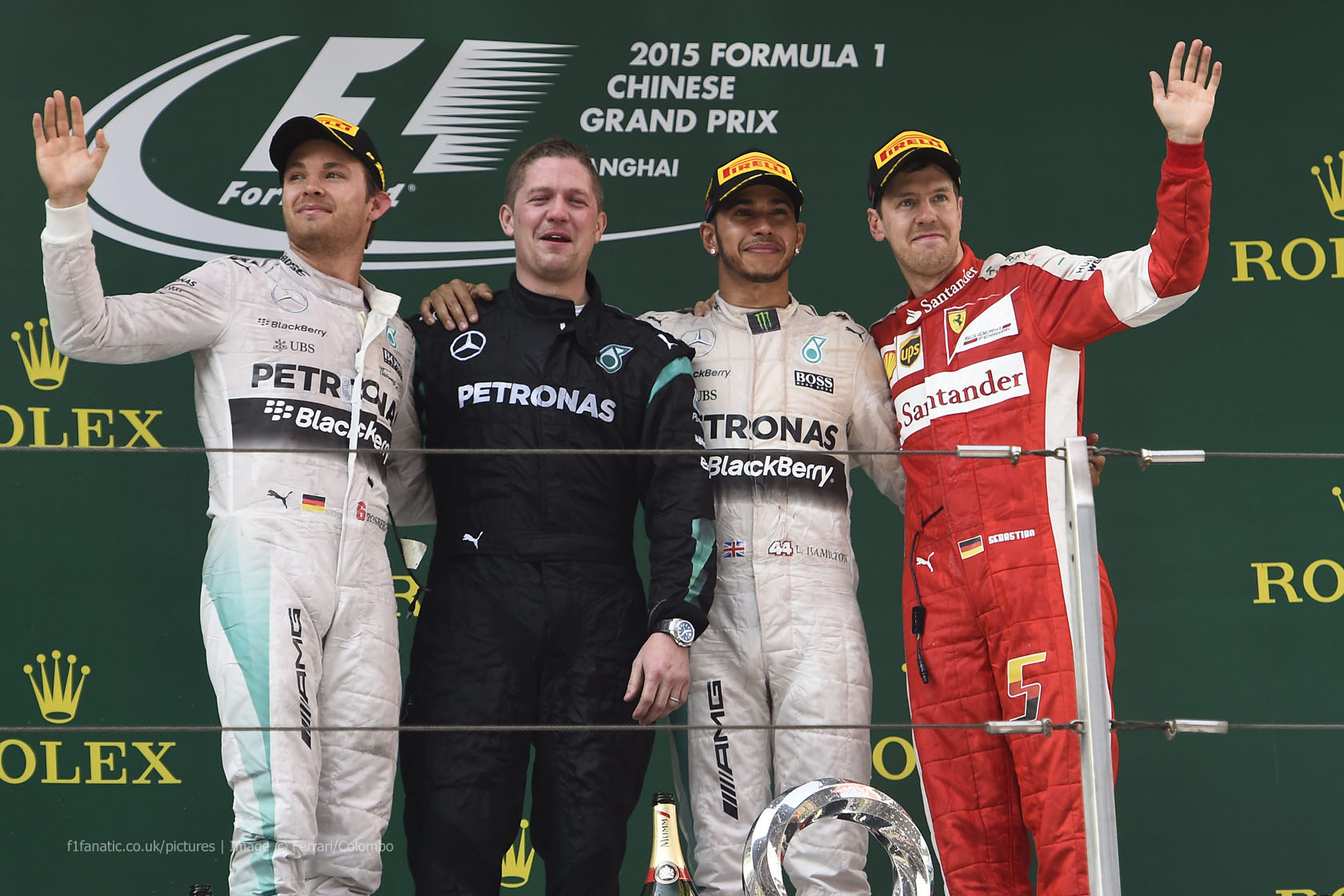 They may not have always finished in the same positions, but Lewis Hamilton, Nico Rosberg and Sebastian Vettel have appeared on all of the first three podiums of the 2015 season.

That is the first time such an occurrence has happened at the start of a Formula 1 season.

For the second time in three races, Hamilton stood atop the podium with Rosberg to his right and Vettel to his left. With Vettel winning in Malaysia, Rosberg is the only driver to have stood on the podium in 2015 but not on the top step.

Lewis Hamilton’s second win of the season was also his fourth in China, making him comfortably the most successful driver at the Shanghai International Circuit. It was another dominant performance from the Mercedes driver, who recorded his second hat trick (pole, win, fastest lap) of the 2015 season (the other being Australia) and the seventh of his career.

Hamilton’s win was also his tenth consecutive podium appearance, stretching back to Monza last year, which is the fifth-longest run in the sport’s history. Hamilton needs one more podium in Bahrain to equal Sebastian Vettel’s personal record of 11 consecutive podiums – which he has achieved twice – but will need to appear on every podium up to the Singapore Grand Prix if he is to break Michael Schumacher’s all-time record streak of 19.

The world champion has also now led 12 consecutive races from Hungary last year, the joint fifth-longest run of all time. Once again, Hamilton needs to lead just one lap in Bahrain to match Sebastian Vettel’s longest run. Hamilton has now also led 1,956 laps in his career, jumping Sir Jackie Stewart and Jim Clark to sixth on the all-time list.

After Max Verstappen’s Renault engine decided to spontaneously ground to a halt along the pit straight in the closing laps of Sunday’s race, the Chinese Grand Prix became the seventh race in F1 history to have finished under the Safety Car.

List of races that have finished under Safety Car conditions:

Fernando Alonso also saw the chequered flag in a McLaren on Sunday for the first time since the 2007 Brazilian Grand Prix. It was only the second time the double world champion had finished a race in 12th position – the first being on his Formula 1 debut in Australia 2001.

Lotus scored their first points of the season with Romain Grosjean coming home in seventh place, but after a torrid afternoon for Pastor Maldonado ended with the Venezulean forced out after contact with Jenson Button, Maldonado remains the only driver yet to finish a race this season aside from Kevin Magnussen.

After his contact with Maldonado, Jenson Button received the first penalty points on his super license from the FIA.

Manor Marussia recorded their first double finish in China since they were revived at the beginning of the year, with Will Stevens and Roberto Merhi classified in 15th and 16th places respectively, two laps down.