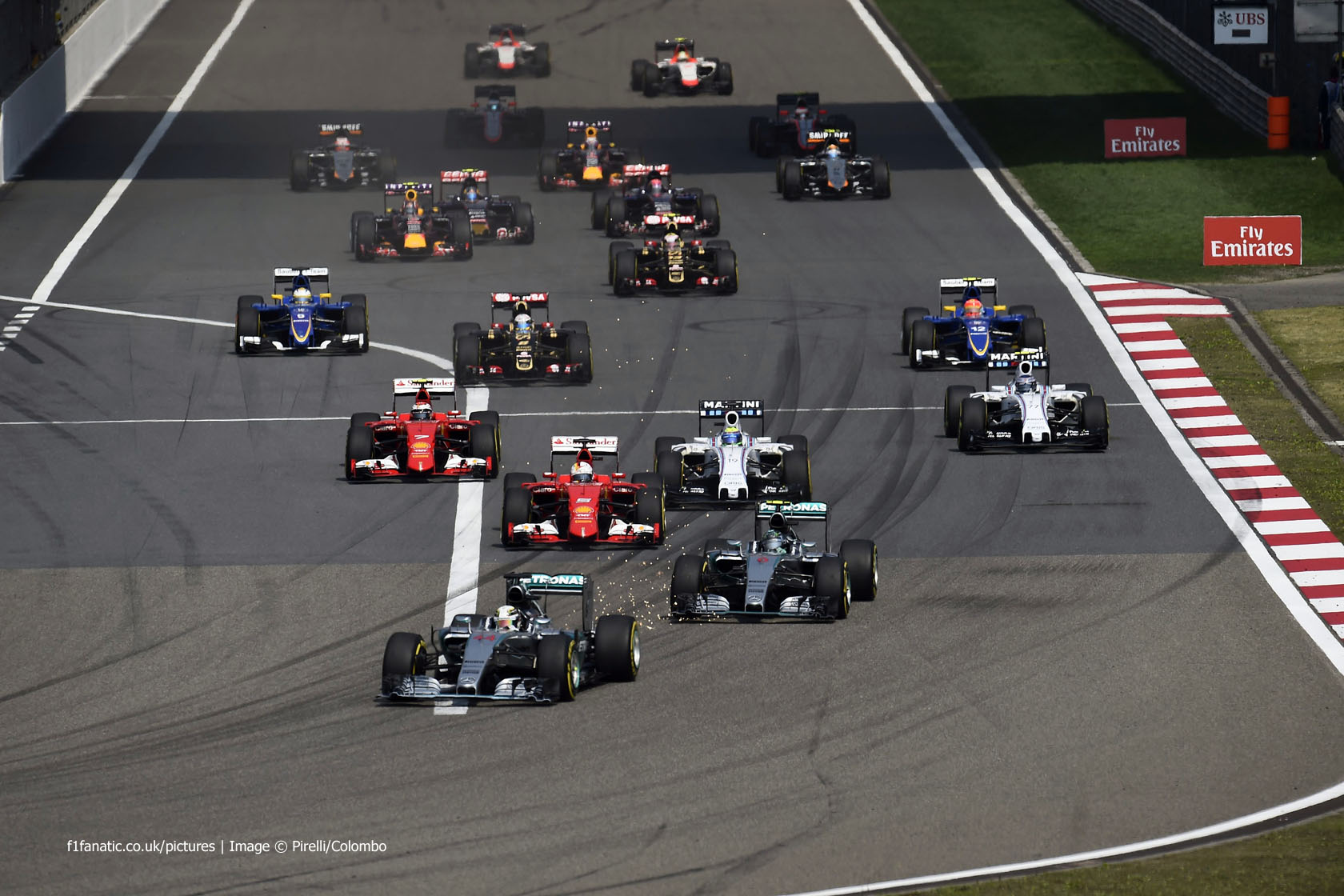 Lewis Hamilton – Fastest in every single session, except for Q1. Led all but three laps of the race en route to his second hat trick of the season. Able to control his pace and manage his tyres whilst never allowing his team mate to get within a second of his lead all race. Has now beaten his team mate to the chequered flag in all three races in 2015.

Nico Rosberg – Only just missed out on beating Hamilton to pole by four hundreths of a second on Saturday. Kept pace with Hamilton during the race but once again was never close enough to mount a serious challenge for the lead. Was very open after the race about his views that Hamilton’s tyre saving pace had left him unnecessarily at risk from Vettel, but Rosberg was never required to defend his position.

Daniel Ricciardo – Decent qualifying position was squandered after poor start as the car fell into anti-stall and was forced to try and fight his way back through the field but was held up by team mate Kvyat in the opening stint. Ran the longest stint of the race on Soft tyres but had a tough time passing Ericsson’s Sauber in the final stint and inherited ninth following Verstappen’s retirement.

Daniil Kvyat – A weekend of problems for the Russian with brake issues on Friday, followed by a loss of power in qualifying that left him 12th on the grid. Lost places at the start as one of only two drivers to start on Medium tyres and unnecessarily cost his team mate and himself time by fighting before his Renault engine blew on lap 15, ending a forgettable weekend. Felipe Massa – Damaged a front wing during second practice when his rear wing stalled, sending him into the barriers. Impressive lap in qualifying put him fourth on the grid but he lost out to Raikkonen at the start. Ran fifth for the entire race, powerless to catch the leading pack but comfortably the quicker of the two Williams.

Valtteri Bottas – Lined up behind his team mate on the grid and was able to jump him at the start, but lost out after Raikkonen’s daredevil move into Turn Three. Struggled to match his team mate’s pace during the race but was easily quicker than the Lotus behind and so spent the race virtually alone.

Sebastian Vettel – Three races, three podiums for Ferrari’s newest driver. Was consistently quicker than Raikkonen all weekend and ran third the entire race, behind the Mercedes. Tried to put Rosberg under pressure in the middle stint, but the way that Mercedes pulled away after the final stops suggested challenging for the win was never really a possibility for Vettel in China.

Kimi Raikkonen – Failed to beat the Williams in qualifying after complaining of balance problems during his final run. Leapt into fourth at the start with an aggressive move on Bottas into Turn Three and spent the first two stints behind Vettel. Had an opportunity to challenge for the podium with fresher tyres in the last stint, but the late Safety Car robbed him of a chance to challenge.

Fernando Alonso – Beaten by Button in qualifying to start 18th, but jumped his team mate at the start. Benefitted with a couple of positions after Button and Maldonado collided, but was too far off from the top ten to have any chance of points. Seeing the chequered flag for the first time this season will have been the main target achieved for this weekend.

Jenson Button – An encouraging tenth in second practice, but the pace was not there for the team in qualifying and 17th on the grid was likely the best he could achieve. Button lost out to Alonso at the start and ran the Medium tyre in his last stint. Button admitted the collision with Pastor Maldonado was a misjudgement and he received a five second time penalty and points on his superlicense as a result.

Nico Hulkenberg – Was one of the first drivers to do his last run in Q1 and paid the price, missing the cut for the next stage. Jumped from 16th to 12th at the start which included passing Daniil Kvyat’s Red Bull and was running close to Verstappen and Ericsson before being forced out with drivetrain problems.

Sergio Perez – The first car to be eliminated in Q2, Perez was one of the few drivers to opt for an aggressive three stop strategy to try and make places through the field. Was catching Ericsson’s tenth placed Sauber in the final stint, but was unlikely to have ever challenged him even without the Safety Car.

Max Verstappen – A lock-up in qualifying cost Verstappen a place in Q3, by his own admission. Made up two positions at the start despite contact with Kvyat before gradually making his way into the points, pulling off a series of stunning and aggressive overtakes on the two Saubers and Sergio Perez along the way. Was running in eighth before his car ground to a halt along the pit straight.

Carlos Sainz Jnr – A tough weekend for the Spanish rookie. Beaten by Verstappen in qualifying before a spin at the beginning on lap two left him last. Recovered to 14th by his first pit stop but a gearbox problem on lap 20 left him stranded on track, costing around 20 seconds. From that point on, points were never a possibility and ultimately crossed the line an unfortunate 13th.

Romain Grosjean – Sat out first practice as Jolyon Palmer drove his car. Consistently in the top ten on the timing sheets all weekend and qualified a decent eighth. Kept his nose clean at the start and managed his tyres well throughout the race but could do nothing to help catch the Williams ahead. Crossed the line a solid seventh for his first points since Monaco last year.

Pastor Maldonado – Missed out on Q3 by three hundredths of a second. Blamed a braking issue for his pit entry lock-up, had no one else to blame for his spin a few laps later but was blameless in the collision with Button that forced him into retirement for the third consecutive race. Marcus Ericsson – Decent qualifying performance saw him into Q3 and ultimately line up tenth – just less than a tenth of a second off his team mate. Spent a lot of the race battling for position but was passed more often than he passed others. Struggled with front tyre wear and inherited the last points position after Verstappen’s late retirement.

Felipe Nasr – Performed well in qualifying to secure his best grid slot of the season so far with ninth. Passed by Verstappen in the first stint and then struggled to catch the Toro Rosso back in the final section of the race. Gained eighth from Verstappen after the Toro Rosso stopped, but will likely be satisfied with his afternoon’s work.

Will Stevens – Out-qualified Merhi in his first qualifying run of the season. Was finally able to take to the start of a race this season but was passed by his team mate on the opening lap. Stevens overtook Merhi on lap nine and then concentrated on reaching the chequered flag, which he ultimately did, two laps down in 15th.

Roberto Merhi – Went into qualifying on the back foot after electrical problems in final practice kept him from doing a run on the soft tyres. Passed Stevens at the start, but was re-passed during the opening stint. Ran last for the vast majority of the race and was around 15 seconds behind his team mate at the time of the Safety Car, later receiving a five second time penalty after failing to adhere to the Safety Car time delta.

Who was the best driver of the Chinese Grand Prix weekend?