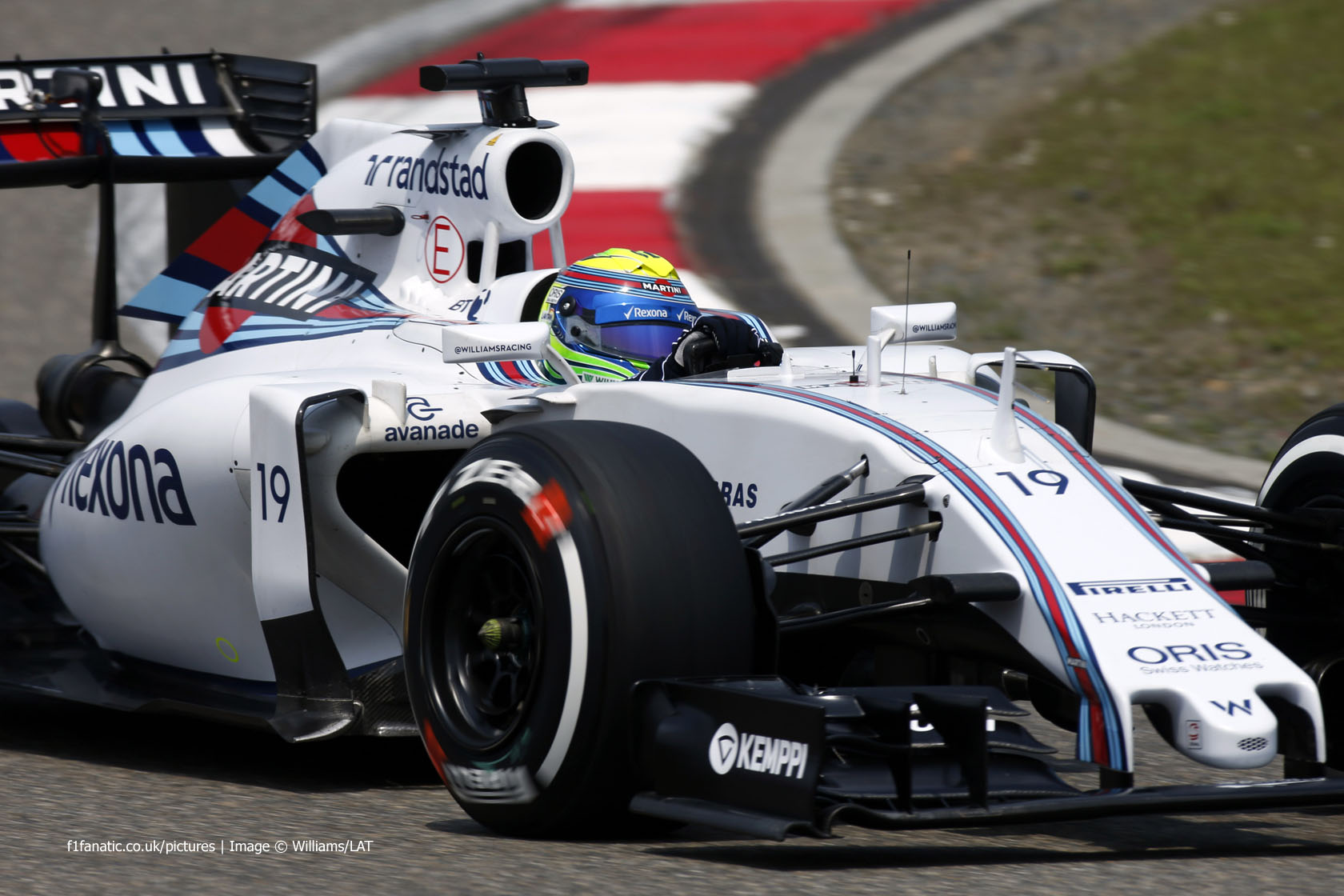 In the round-up: Rob Smedley says Felipe Massa is currently driving at a level that is ‘definitely as good as 2008’.

"Smedley: 'I have worked with him for many years and I am still seeing him develop and it's good to see. What we are seeing at the minute is definitely the best Felipe Massa that we have seen, definitely as good as 2008.'"

"Toto Wolff: 'It may be if we are risking a win against Ferrari we would make an unpopular call, not to freeze everything, but manage them more. Our number one objective, which is what we have decided with the drivers, is we have a big responsibility to the team and the brand.;"

"Hamilton: 'I've always said he is really strong mentally. But I'd like to think I'm stronger this year.

The formula for setting priorities (ESPN)

"When it comes to setting the Federation's priorities, what rational individual can blame the FIA president for placing more importance on improving basic global road safety standards than on tending to Formula One?"

"The Venezuelan is the only driver in the field to have retired from all three races so far, with his involvement in Australia and China ended by clashes with Felipe Nasr and Jenson Button respectively."

"Surtees: 'I was able to secure it for the public when I became the landowner and I want to do more things to get us helping with education programmes. I would like Buckmore to become a feeder for youngsters into careers, working with various colleges.'"

"The tickets will go on sale at 0900 on Wednesday 15 April and will be sold on a first come first served basis. The £120 ticket is an adult general admission ticket valid for the whole event."

The Ants Are Still Dead (Wired)

"Of the 10 or 15 guys I’ve ridden with who have that otherworldly talent, Kimi was atop them all. By a wide margin."

Yet another night in the air and we've reached #BahrainGP Off to work & prepare for some racing fun in the desert! pic.twitter.com/LshbvYEp3O

Romain Grosjean may have had a quiet race in China, but @colossal-squid believes the Frenchman deserves to be voted Driver of the Weekend.

Hamilton, Vettel and Verstappen are all worthy choices for DotW. However, I voted for Romain Grosjean.

He out qualified his team-mate by well over two tenths, made a good start, and although he had a quiet race he also never put a wheel out of line to bag his first points since Monaco last year. While his team mate was battling with the underpowered McLarens and nearly crashing in the pitlane, Grosjean did a fantastic job and stayed out of trouble.

I’m delighted for the Frenchman, as it’s clear that while the new Mercedes power unit is a big improvement for the team, it’s clear that the car is still far off the pace and points will most likely continue to be a struggle. This result is richly deserved by Grosjean after struggling manfully in a dog of a car last year, when 18 months ago we were watching him fight with the Red Bulls and be tipped for a possible future with a front running team. How times change!
@colossal-squid

On this day last year Red Bull lost their attempt to get Daniel Ricciardo’s disqualification from second place in the Australian Grand Prix overturned:

90 comments on “Massa form ‘best we have seen’ – Smedley”