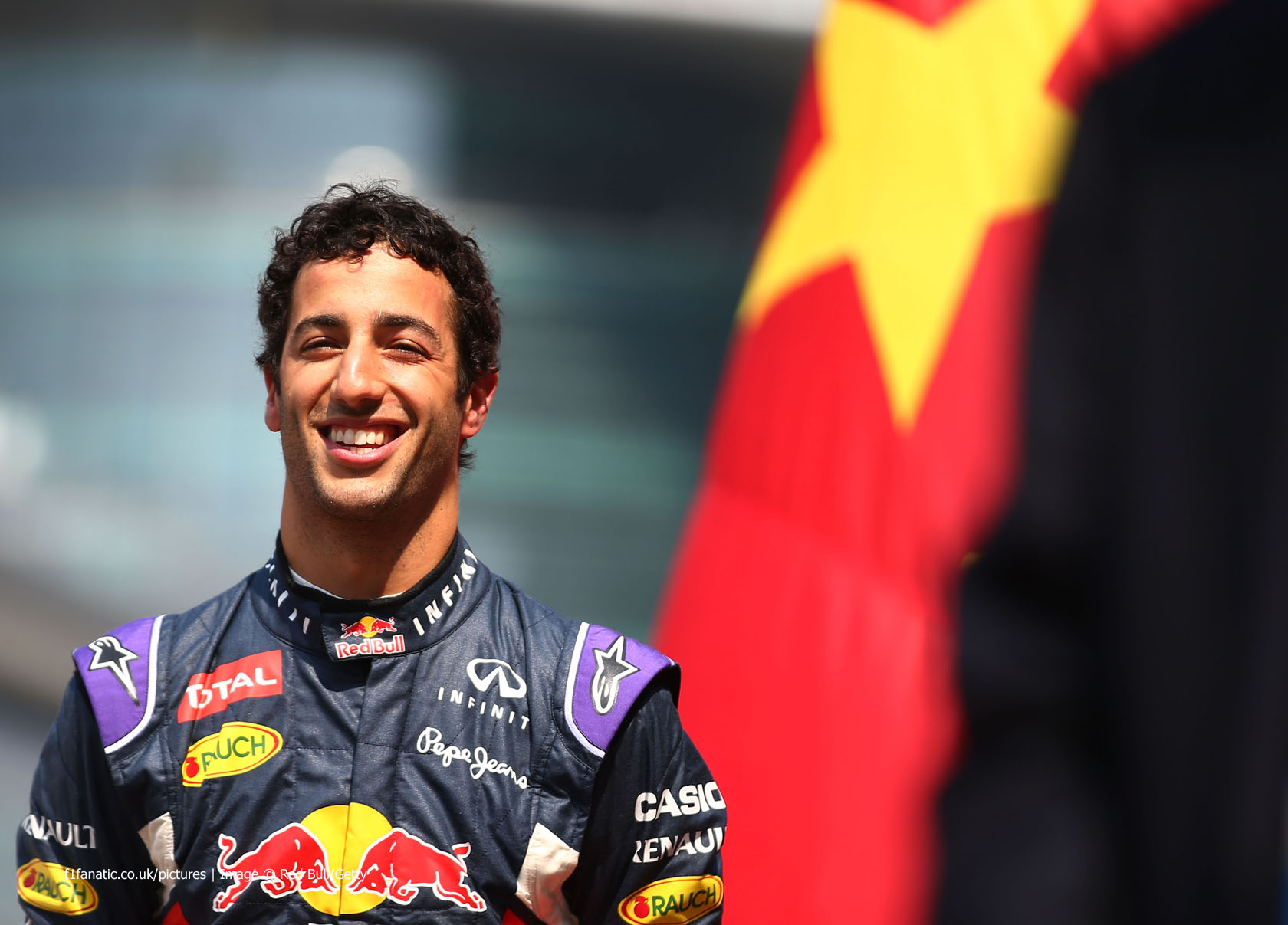 In the round-up: Daniel Ricciardo has been awarded ‘Breakthrough of the Year’ at the Laureus Awards in Beijing.

"The Australian earned the accolade after surpassing all expectations in what was his first season with the team, which included scoring the first three victories of his F1 career - he was also the only non-Mercedes driver to triumph - and eclipsing four-time world champion team mate Sebastian Vettel. "

"Rosberg: 'I said what I felt and now it’s a thing of the past. We did discuss it, which was important to go through it in detail and now it’s behind us.'"

"Button: 'Talking in the press about something you are unhappy on only makes Lewis stronger. Lewis is a very competitive individual when his head is in the right place. It is about toppling him in other areas.'"

"McLaren will begin ramping up performance after showing good reliability in the Formula 1 Chinese Grand Prix, according to racing director Eric Boullier."

Will Stevens: Who is Formula 1's new English driver? (BBC)

" In China last weekend, Stevens finally managed to do what he is there for and take part in the race. There was progress. Both cars finished the grand prix, and this time the fastest Manor - Stevens - was less than three seconds behind the McLaren-Hondas in qualifying. "

Human rights and Formula One (ESPN)

"In recent weeks a new statement has appeared amongst the legalese found on the official Formula1.com website. For the first time in its history, Formula One Management has taken an official position on human rights, and published that position for all to see."

"Last year the (Mercedes) pair duked it out in a thrilling fight for supremacy in Bahrain in which they repeatedly came close to colliding. Their rivals’ best hope is one of them will go a step too far this time."

Hot Topics: Could the WEC become as big as F1? (Red Bull)

"But could the World Endurance Championship become as big as the daddy of motorsports, Formula One? We put the question to a panel of top motorsports insiders to see what they thought."

Congrats @danielricciardo! Our Aussie has picked up the @LaureusSport award for 2014 Breakthrough of the Year. #F1 pic.twitter.com/OQ2OhzsgYO

Visited this cool looking track today for a track run and meeting with the engineers 👍 #F1… https://t.co/tbi1MECYJf

The new GP2 season kicks off in Bahrain this weekend with DRS being introduced into the mix for 2015. When it comes to DRS in F1, however, @afonic is not convinced.

You can find dozens of videos on Youtube with great overtaking action before DRS, when passing someone was really hard, even if you have a superior car.

DRS killed waiting for the unexpected, trying to get that better exit from the corner or following your opponent lurking for even a small mistake. Check the pass Hakkinen did on Schumacher at Spa 2000, while lapping Zonta, one of the best overtakes of all time. It would not have happened in DRS-era Formula, Mika would have waited to use DRS and make an easy pass. Sure we have more overtakes, but they are by-the-book, boring DRS-aided moves.

Secondly, DRS makes many alternative strategies impossible. When you are slower, you can’t defend against a faster opponent. So usually, using a strategy that will result in having worse tyres at the end of the race, will get you overtaken. Besides that, even great defensive drivers, like Button often give up when in DRS disadvatage. That way we have even less fights, and we lose some great defending action, which to me is equally impressive as the attacking moves.

For me DRS has removed a lot of elements of the sport that I used to enjoy and each year I am wishing it gets removed. With “designed to fail” tyres, it’s useless anyway.
@afonic

Five years ago today Sebastien Buemi suffered a hair-raising accident during practice for the Chinese Grand Prix when a suspension failure caused both front wheels to detach from his Toro Rosso:

110 comments on “Ricciardo named Laureus ‘Breakthrough of the Year’”