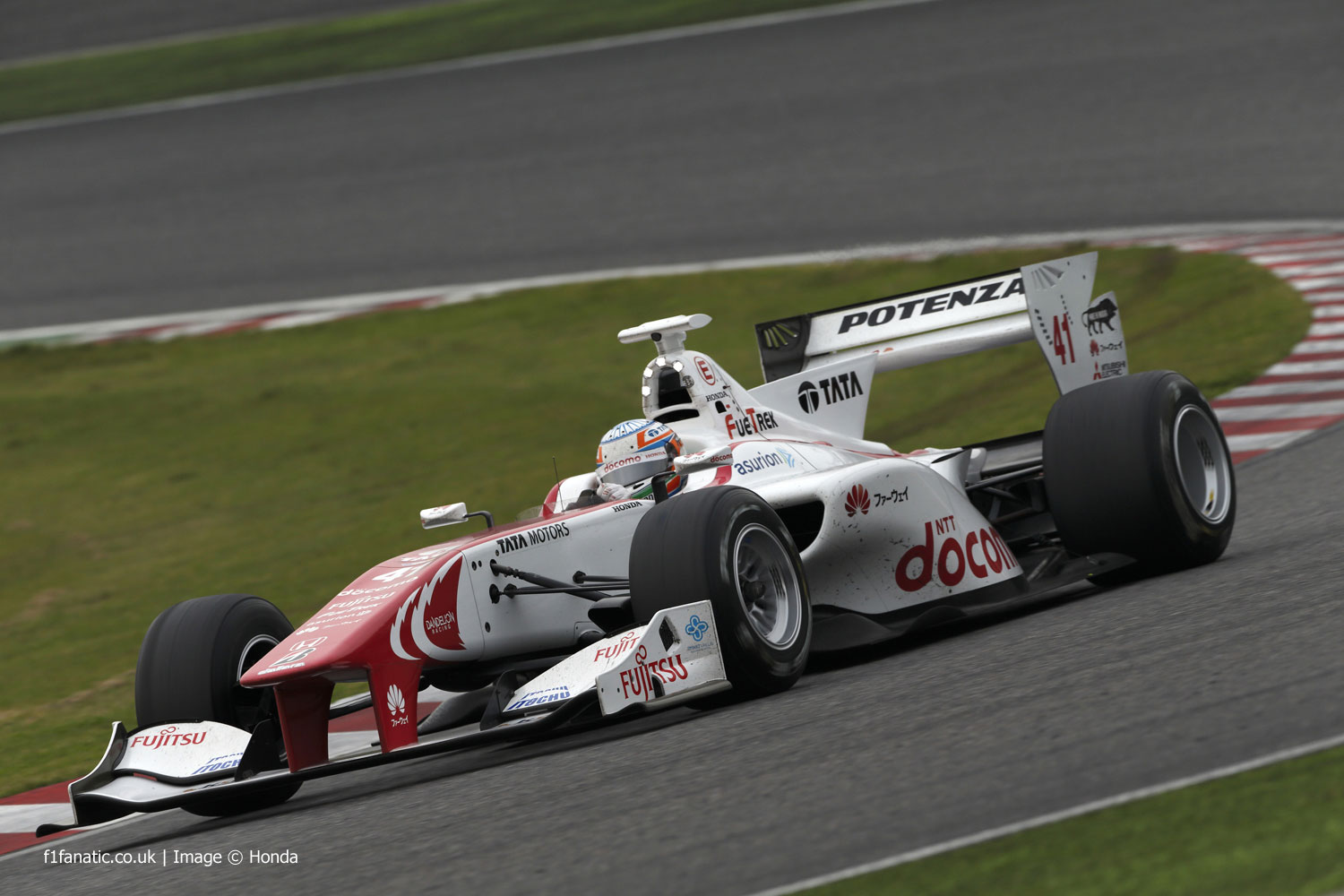 Japanese Super Formula cars offer near-F1 levels of performance so it’s no surprise former grand prix drivers continue to shine in the category. The opening round of the 2015 championship at Suzuka was won by a driver who appeared on the F1 grid last year.

Also in this weekend’s racing wrap we have IndyCar from Long Beach, World and British Touring Cars, NASCAR, and the United SportsCar Championship.

The Super Formula Championship began with another grid containing talent that wouldn’t look out of place in the Formula One paddock, with Honda and Toyota powered cars that have developed a reputation for being one of fastest outside of F1. Past champions include Ralf Schumacher, Pedro de la Rosa and Kazuki Nakajima.

Victory in the opening round of this year’s championship went to one-off 2014 F1 racer Andre Lotterer, who made a superb start along with TOM’s team mate Nakajima. Lotterer took the lead from the slow-starting pole sitter Naoki Yamamoto and never lost it.

Nakajima backed his team mate up in second, while Yamamoto’s engine expired on the final lap. That handed third place to another former F1 driver, Narain Karthikeyan.

Japan’s most recent F1 driver Kamui Kobayashi made his debut in the category, finishing in ninth place.

Helio Castroneves led away from pole at the start, while Scott Dixon passed Juan Pablo Montoya to move into second. When Castroneves was held in the pits by a member of his pit crew to narrowly avoid a collision with Tony Kanaan, Dixon slipped through into a lead he only relinquished at pitstops. Castroneves held on to second ahead of Montoya, who retains the lead of the Championship.

Meanwhile reigning Champion Will Power endured a difficult weekend, going out in the first part of Qualifying after being caught out by a red flag, and then suffering a brief engine stall early in the race which dropped him a lap down.

Citroen dominated once more in the WTCC, with Jose Maria Lopez and Yvan Muller sharing the two wins, despite the latter having a grid penalty for the opening race. With that in mind however, Muller strategically qualified 10th, giving himself pole for race two.

Lopez eased to victory in race one ahead of Ma Qing Hua and Sebastian Loeb, with the latter hounded for a large portion of the race by his own team, with Mehdi Bennani behind the wheel, despite having started ahead.

Meanwhile in race two, Muller took his first win of the season ahead of Loeb, with the two keeping nose to tail for the entire race. Despite starting tenth on Marrakech’s narrow streets, Lopez recovered to third to retain his championship lead.

Matt Kenseth won a rain-delayed race at Bristol. Championship leader Kevin Harvick went out in a collision with David Ragan.

Ricky and Jordan Taylor won the USCC Long Beach event for their father’s Chevrolet team, after starting from the front. Following the first stint, they fell behind the Ganassi Ford DP of Scott Pruett and Joey Hand, but they got back ahead after Jordan dived inside Joey Hand at the first corner.

For the remaining 40 minutes Hand couldn’t bridge the gap, and Taylor Racing won by three seconds. The GTLM class saw the Risi Ferrari in the hands of Giancarlo Fisichella and Pierre Kaffer take the lead until after the first stops, when the BMW of Dirk Werner and Bill Auberlen recovered from fourth to get past Antonio Garcia and Jan Magnussen in the Corvette, the sister BMW of Lucas Luhr and John Edwards.

With 30 minutes remaining, eight seconds separated Werner and Kaffer, but with only 10 minutes left on the clock, Werner made the winning move, getting past Kaffer to take the class victory. The next round for the USCC is at Laguna Seca in May, when the leading Prototypes and GTLM entries will be joined once again by the GTD and Prototype Challenge cars.

Turkington took pole ahead of Gordon Shedden and Plato, who had been many people’s favourite due to his low Championship position following Brands Hatch and subsequent lack of ballast.

He made this count in the first lap however, easing past both men ahead on the opening lap before leading to the end, with Turkington and Shedden swapping positions before the flag.

Fastest laps now dictate the grid for race two, meaning Shedden started on pole, but it was Turkington who dominated from second, winning ahead of Matt Neal and a jubilant Adam Morgan.

The reverse grid in race three promoted rookie Josh Cook to pole position, who battled for a large portion of the race with Aron Smith before an incident ruined both their chances. An enthralling race saw Neal win ahead of Andrew Jordon with his first podium for MG, and Shedden taking third.

The BTCC has not yet uploaded video of this round

The races above were featured previously in Weekend Racing Wrap but footage was not available at the time.

Next weekend we have round four of the IndyCar series, and also of the World Rally Championship, which restarts after a few weeks break. The World Rallycross Championship and Formula Renault 3.5 kick off while Euroformula Open head to their second round at Paul Ricard and NASCAR race yet again.

Will you be watching any of these races? And what did you watch last weekend? Have your say in the comments.

Thanks to @Mathers for contributing to this article.