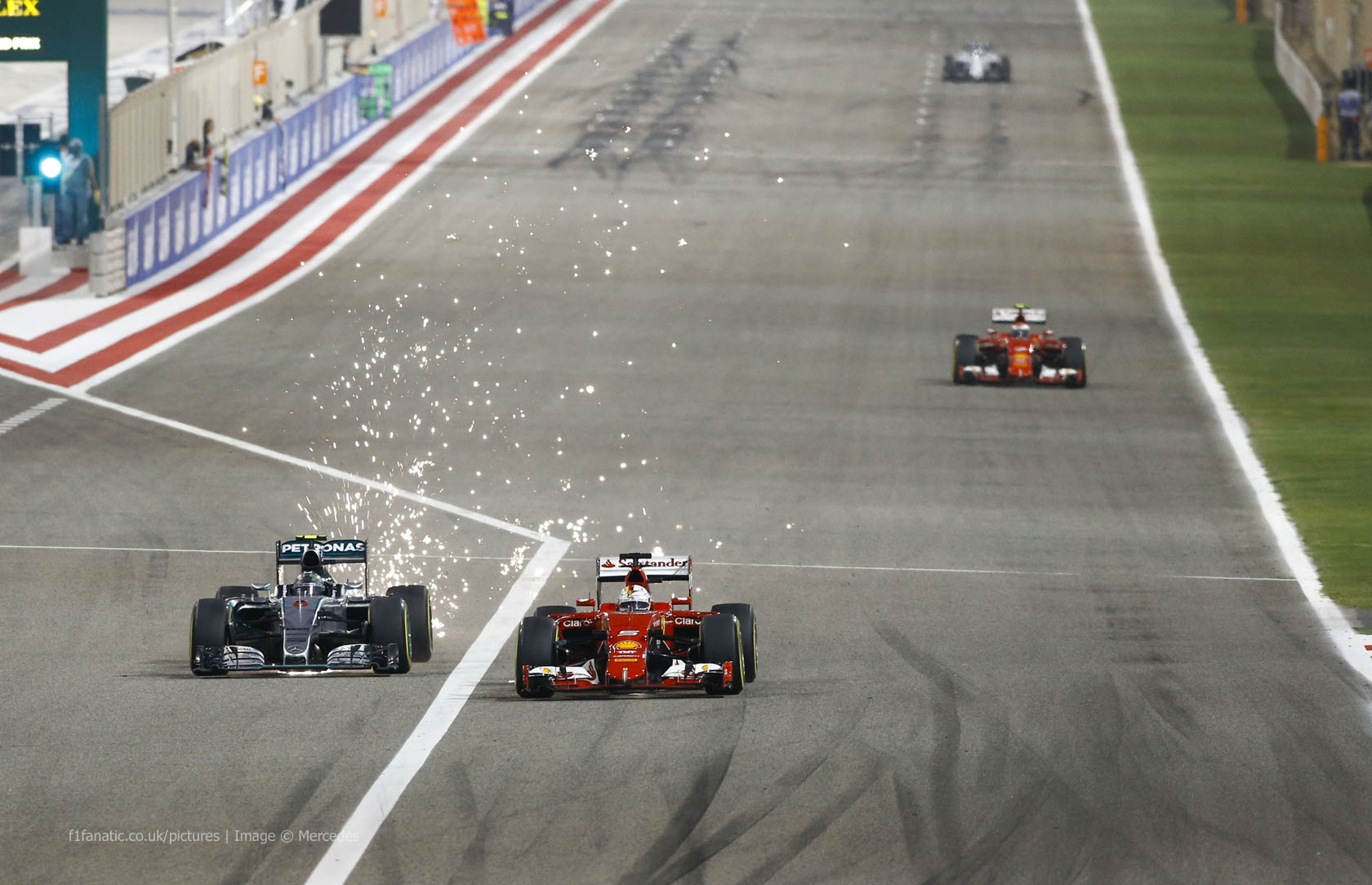 The third and fourth rounds of the F1 season gave us a better idea of what to expect from the year ahead: Mercedes may be untouchable in qualifying, but Ferrari are increasingly a threat over race distances.

While that threat failed to materialise in China failed to excite, the Bahrain Grand Prix again produced an intriguing battle, if not one as memorable as last year.

Mercedes were victorious in both races, but it was clear during the final stages of the Bahrain race they are increasingly feeling the pressure from their Italian rivals. As Kimi Raikkonen’s Ferrari bore down on the leading silver cars first Nico Rosberg then Lewis Hamilton suffered brake-by-wire faults. One more lap and Raikkonen might have snatched an improbable victory.

Here’s what you had to say about the last two grands prix.

Your verdict on the Chinese Grand Prix

While some of you enjoyed the strategic contest between Mercedes and Ferrari, others were failing to stay awake:

Apparently at the next grand prix Verstappen’s mother is going to be there. His sister also. His mother is going to give her a certain bag she wanted for so long. They made a list of which relatives were at the previous races to see which parent cared the most I think.

Also some French people keep saying Franz ‘Toast’, while it is Franz Tost. The commentators spent a full five minutes talking about that.

That was how interesting this race was. Mercedes back to Melbourne ways.
PorscheF1 (@Xtwl)

For the first time ever, I fell asleep (briefly) in the middle of a Formula One race.

I’ve got used to watching races where the first two positions don’t change hands, but there was no excitement in the whole top six for most of this race. I suppose some people like tactical battles, drivers trading tenths here and there and trying to gain an advantage in the pits, but I prefer on-track overtaking myself.

I know there were some decent battles in this race, but they were all for the positions that don’t really matter.
@Estesark

I quite enjoyed that, the race had a lot going on and was good to watch. The battle at the front was nice and strategic, the midfield was chaotic and there was a good battle at the back.

OK there wasn’t a ‘real’ race at the front but it was a prime example of just how comfortable Hamilton feels at the moment. He had the measure of Rosberg all race and was even aware enough to try back Rosberg into Vettel. A supreme performance.

The major disappointment for me was Williams, they had nothing to answer Ferrari’s pace, never mind Mercedes’.
@GeeMac

We had Hamilton managing a four car train for the lead to perfection with the added bonus he continues to get under Rosberg’s skin. They may not have been banging wheels and locking into corners trying to dive past, but that isn’t always what Formula One is about. If you didn’t see a tense battle going on, then that’s just because you don’t know the details to look for.

And we did have some real racing going on down the field. I simply can’t believe Verstappen is 17. The patience he has sizing up a pass and the level headed manner he dealt with the engine failure. I am in awe.

So a good race. Not a classic, but it’s the staple kind of racing F1 is typically about. If you didn’t enjoy it, you have the wrong sport.
@Philipgb

Was the Safety Car necessary? The race ended under the Safety Car while a group of marshals made a shambolic attempt to recover Max Verstappen’s car from the pit straight. Could it have been handled better?

Not as terrible as some are making out. Slightly disappointing, but some good overtaking moves: when it was wheel to wheel, it was side by side for a good half lap (Maldonado and Button, Ricciardo and Ericsson).

But the Safety Car at end spoiled it. They could have easily managed the last three laps with double waved yellow on the pit straight. It wasn’t in a dangerous place. Having made the decision they did, it was disappointing that they didn’t at least give the Virtual Safety Car a go. The marshals were like something out of a Carry On film.
@EuroBrun

Yet another shocking performance from the Chinese marshals. I thought the whole point of the Safety Car was so marshals could enter the track etc… but they took there time even getting to that Toro Rosso aside from their childlike attempt to remove the car.
Mark G (@M4rkjg)

Your verdict on the Bahrain Grand Prix The Bahrain Grand Prix had a lot to live up to after last year’s thrilling battle between the Mercedes drivers. It may not have had the Safety Car which helped create so much action last year, but many still felt Bahrain’s second race under lights produced plenty of action.

Many will naturally compare the race to last year but at the end of it, classic races are rare (and that’s why they’re classics). However I rate this race nine out of ten.

A good battle at the front and it’s so good to see Mercedes getting a real fight from Ferraris. Some very good battles and like someone mentioned here, Bahrain looks stunning under lights and provides great racing; just shows that not all Tilkedromes are boring.
Neel Jani (@Neelv27)

Good race, but Hamilton looked like he was pacing himself for most of it. Good to see Rosberg start to show some fight and a well-deserved second for Raikkonen. Great stuff from Vettel, but the unforced error was costly.
Tgu (@Thegrapeunwashed)

Never got edge-of-my-seat excited. On reflection, it was worth a seven.

Couldn’t believe Ferrari pulled off a 2.4 second pit stop. I remember the days when someone would forget a wheel and they’d have a big argument with lots of hand-waving while the driver waited patiently.

Ferrari’s renaissance has been best part of season so far.
Martin (@Aardvark)

This one was a bit like seeing a cloud on the horizon and wondering if it’s bringing rain. It didn’t.

Glad that Raikkonen got second, but there seemed to be more driver errors than driver excellence here. (yes I know Rosberg had brake problems).

Rosberg’s passing on the Ferraris was… inelegant.
@Bazza-Spock

Does Formula One have a good racing product let down by poor television production? Several of you said so after the last race.

A pretty good race but the shoddy coverage made me miss most of the midfield battles.

Enjoyed the race, but agree that the TV Director seemed to be more interested in the driver’s girlfriends than actual overtaking.
Rick Lopez (@Viscountviktor)

I enjoyed the race but suffered from awful camera choices. Many overtakes and midfield battles were missed. It’s a seven-out-of-ten.

It would’ve been higher had Ericsson not suffered in the pits. First time this year that he was clearly faster than Nasr and this had to happen. Shame.
Christopher (@Chrischrill)